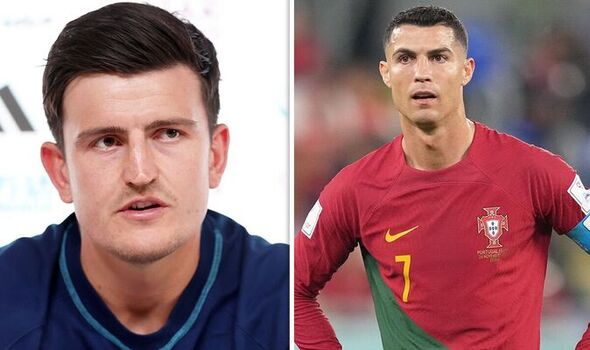 Manchester United captain Harry Maguire has compared himself to Cristiano Ronaldo following the forward’s dramatic exit from Old Trafford. Maguire has hit back at his critics by stating even the best players in the world face constant scrutiny.

Ronaldo’s departure from United was confirmed earlier this week. The Red Devils terminated his contract following the explosive interview with Piers Morgan, where he spoke out against the club and manager Erik ten Hag.

The Portugal superstar has received plenty of flak since snippets of the interview were first released on the final day of Premier League action before the break for the World Cup. Ronaldo fell out of favour under Ten Hag this season, making just four league starts.

Maguire has also been out of Ten Hag’s preferred starting XI. The centre-back was widely criticised for his performances last season and has struggled to get onto the field this term.

The 29-year-old spoke to the media on Thursday ahead of England’s second Group B game against the USA on Friday. And when asked about criticism of him, he compared himself to Ronaldo.

Maguire said: “Cristiano Ronaldo is one of the greatest players to play football and I have seen him criticised day in day out. It is part of the game.”

Maguire is set to earn his 50th cap on Friday and will likely partner John Stones at the back for the Three Lions. The former Leicester star insists he has full confidence in his own ability amid doubts over his place in Gareth Southgate’s starting XI.

Maguire said: “I have great belief in myself. I go on the training pitch, work as hard as I can, give my all and it gives me the chance to perform at the best level.

“I want to play every week for my club and I will fight to get to where I want to be. I had great belief that over the 49 caps for England that I earned the trust to be in the squad and be available for the team selection.”

Maguire fell ill during the second half of the 6-2 win over Iran on Monday. But he has confirmed he is now fully fit for the USA clash.

He added: “I felt unwell during the second half but I’ve done all the tests and appropriate action and felt well since. I feel well and ready to go for tomorrow.”

Hodgson admits Palace have to rediscover winning touch without Zaha