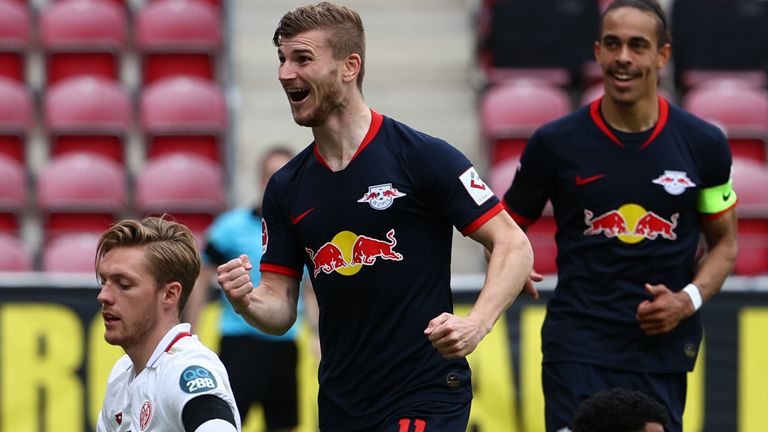 Timo Werner scored a hat-trick against Mainz for the second time this season as RB Leipzig reclaimed third spot in the Bundesliga with a resounding 5-0 victory at the Opel Arena on Sunday.

Werner, who scored three goals in November’s 8-0 thrashing of Mainz, set Leipzig on their way inside 11 minutes, slotting home his 22nd league goal of the season from Konrad Laimer’s brilliant cross.

Captain Yussuf Poulsen marked his 250th appearance for the club with a towering header midway through the first half, before Marcel Sabitzer rounded off a scintillating counter to leave Leipzig in complete control before the break.

Werner applied the finishing touch to a slick team move within three minutes of the restart and, after spurning a host of chances, eventually sealed the hat-trick with a lofted finish over Mainz goalkeeper Florian Muller with the 24th goal of his impressive Bundesliga campaign.

3 – @TimoWerner is the first player since 1998-99 (Ulf Kirsten vs Mönchengladbach) to score two hat-tricks against the same opponent in the same #Bundesliga season. Unstoppable. @RBLeipzig_EN #M05RBL pic.twitter.com/tAyjboJLe8

The treble saw Werner hit the 30-goal mark in all competitions for Leipzig this term and reignited Julian Nagelsmann’s team’s challenge for Champions League qualification with a victory that left them seven points off leaders Bayern Munich.

Man of the Match: Timo Werner It took just a little over 10 minutes for Leipzig to hit the front, full-back Laimer’s driving run left two Mainz defenders trailing in his wake and his inch-perfect cross was dispatched by Werner, who found the net for the first time since February.

Leipzig’s superiority yielded a second on 23 minutes, with Poulsen powering Sabitzer’s cross through the defences of Muller in the Mainz goal.

Werner went close with a header and Poulsen blazed a gilt-edged chance over before the returning Sabitzer then got in on the act himself on 36 minutes, the midfielder opening up his body to pick out the top corner of the Mainz goal at the end of a breath-taking Leipzig counter that had seen Muller thwart Christopher Nkunku on the goal line seconds earlier.

Nkunku spurned a glorious chance at the end of the first half when he opted to shoot instead of squaring for the unmarked Werner and screwed a shot wide, but it wasn’t long before Leipzig stretched further ahead. Within seconds of the restart, Kevin Kampl instigated a sensational one-touch attack that ended with him driving into the box and squaring for Werner, who added hi second into the unguarded net.

Werner squandered two glorious opportunities in the space of two minutes to complete his hat-trick, lashing a first-time effort from the impressive Dani Olmo’s pass wide before bundling the ball wide from six yards from Nkunku’s teasing cross.

Kylian Mbappe: Paris Saint-Germain forward feels club keeping him against his will amid Real Madrid bids