Manchester City boss Pep Guardiola has revealed Eric Garcia is “conscious” after suffering a sickening injury in the 3-0 win against Arsenal.

Etihad Stadium medics rushed on to the pitch in the closing stages of the Premier League restart clash after Ederson clattered into Garcia in an accidental collision.

He was tended to for around 10 minutes before being taken off the pitch on a stretcher.

Guardiola expects Garcia, 19, to head to hospital for further tests.

The City boss said: “Yeah, we are a little bit concerned.

“He responds quite well but we have to wait for what’s going to happen in the next hours about Eric. 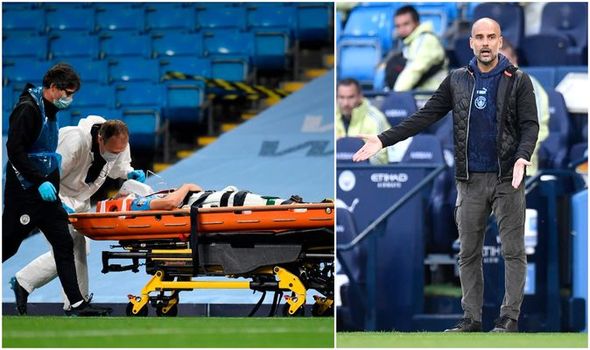 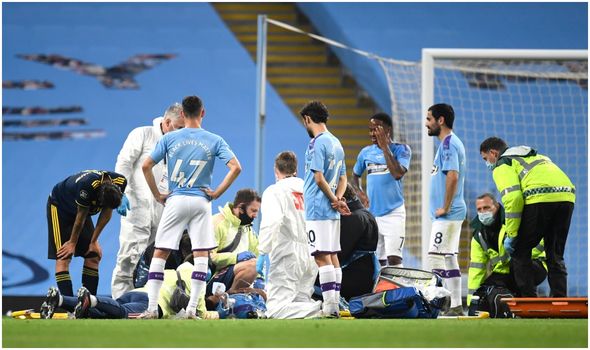 “Of course, the first game, you never know what’s going to happen for the fact [it’s] a long time without playing.

“Apart from Eric, no injuries and in some moments we played good.”

Guardiola, who used all five substitutes before Garcia’s injury, added: “He’s conscious right now. That is a good sign but I think he is going for extra tests in hospital.”

Raheem Sterling opened the scoring after capitalising on a David Luiz mistake.

He said: “Eric had a fantastic game, he fitted in really well, composed and it was sad to see him go off like that.

“Seeing him on the pitch at first he looked pretty bad but after a little bit he looked himself but only time will tell.”

Kevin De Bruyne doubled City’s lead from the penalty spot after Luiz was sent off for hauling down Riyad Mahrez in the box.

Phil Foden stepped off the bench to add City’s third.