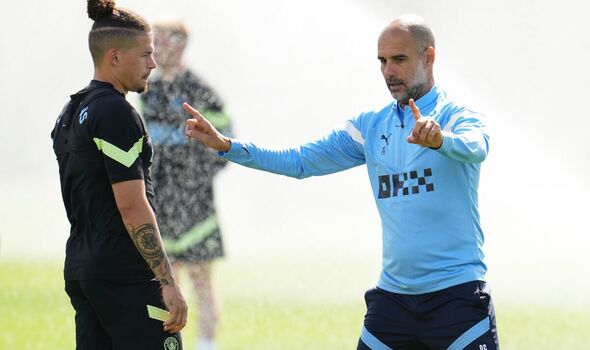 Pep Guardiola has voiced his frustration at Kalvin Phillips after the midfielder returned to Manchester City from the World Cup “overweight”. The City boss admitted the England midfielder, 27, who has struggled with injury since his £45million summer arrival from Leeds, had piled on the pounds in his time away.

And explaining why he was not in the matchday squad for Thursday’s Carabao Cup clash against Liverpool, Guardiola said he was in no condition to train on his return.

“He’s not injured. He arrived overweight. I don’t know why but he didn’t arrive in the condition to do training sessions and to play.”

Phillips, who has appeared just four times for City since his summer move from Leeds, has seen his opportunities limited by a persistent shoulder injury.

The midfielder, who has made just four appearances, had surgery in September to rectify the problem and worked his way back to fitness and into Gareth Southgate’s World Cup squad for Qatar.

Yet with Jude Bellingham taking his place alongside Declan Rice in the centre of midfield, Phillips found his game time limited with England as well making two cameos off the bench against Wales and Senegal.

City’s players were given some time off after England’s exit and only returned to training at the Etihad on Wednesday.

While John Stones, Jack Grealish and Phil Foden all made appearances off the bench and Kyle Walker was an unused substitute, Phillips was absent.

Guardiola offered no indication on a timescale for Phillips return but the midfielder will be hoping to be fit enough to make the squad for the match against his former club Leeds next Wednesday.