Home » Soccer » Man City: Did Pep Guardiola get it wrong against Lyon? Manchester City’s wait to lift the Champions League goes on for at least another year, but Pep Guardiola must shoulder some of the responsibility for a tough night in Lisbon.

There may always be a certain undertone of anxiety in knock-out games involving City, both for fans and staff – flashbacks to Fernando Llorente’s bundled winner. To Raheem Sterling’s last-gasp celebrations, cut short by VAR. And that’s just one game.

But the ease with which a Lyon side who, bar winning the whole tournament, will not even be playing in Europe next season after finishing seventh in Ligue 1, cut them apart in their 3-1 quarter-final defeat on Saturday night was no fluke, and little to do with nerves. There was a tactical masterclass on display, not unusual for games with Guardiola in one of the dugouts. What was far from usual was that it came from his opposite number.

Guardiola is not a man averse to tactical surprises, and not just for one-off games. Few other managers would have turned Javier Mascherano from world-class midfielder to ball-playing centre-back, for instance. But Pep is not other managers.

Even geniuses, enigmatic by nature, get it wrong. It is not all too unusual for eyebrows to be raised on glancing at a Manchester City team sheet, but they would have been even higher than normal come 7pm. 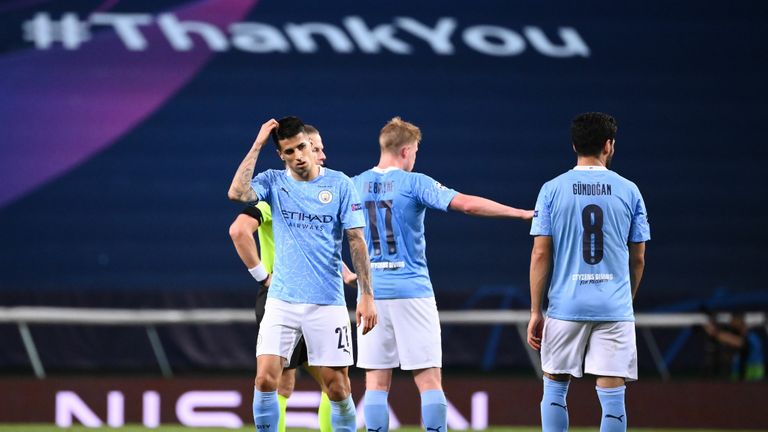 A back three to match up against a Lyon side who finished in mid-table in the abridged Ligue 1 season, with a notable lack of the technical genius that has underpinned the free-scoring success of Guardiola’s City, had not been on the cards in most people’s predicted line-ups.

No David Silva, no Bernardo Silva, no Phil Foden, no Riyad Mahrez. At least one had played in each of the 57 previous games this season. Only Kevin De Bruyne was the one creative wizard tasked with unlocking the Lyon defence, however. But even arguably the best midfielder in the world can only do so much on his own.

Different teams for different games, of course. “We tried to cover our weak points in comparison with their strong points,” Guardiola told BT Sport after full-time, perfectly reasonably, albeit perhaps surprising from the manager of a team regarded as one of the best in Europe.

That said, this was a Lyon side who in the first leg of the previous round had denied Juventus a shot on target across an entire 90 minutes. They conceded less than a goal a game in the league. And while City have had plenty of experience in having to unpick tight defences, rarely have they had to do so with so much of their playmaking talent on the bench.

Before half-time especially, it really showed. “Except in the first 20 minutes, we struggled to find our spaces to attack them,” even Guardiola admitted. Only a couple of flashes of brilliance from Raheem Sterling and De Bruyne, plus some briefly haphazard goalkeeping, threatened to add to the 148 goals City had scored across 58 previous games this season. If the issue needed more exposure, the introduction of Mahrez 11 minutes into the second period provided it. City immediately looked a more coherent attacking unit with him in the side, and it was no surprise when he played a part in his side’s equaliser barely 10 minutes later.

Guardiola will, and has already, pointed to his side’s inability to take the chances they did create after half-time – Raheem Sterling may have his shocking miss ruminating around his head by the start of next season. While he is right, the fact it took a personnel change and 75 minutes before City created the kinds of chances worthy of looking back on with regret is just as valid an argument.

While City’s attacking impetus may have been limited by Guardiola’s team selection, in attempting to stifle Lyon’s wide men there was at least hope they would be defensively resolute. Perhaps there is something in the Lisbon air this week, but just like Barcelona 24 hours prior, City looked all at sea at the back.

It would be easy to point out the elephant in the room of their season has been a shaky defence, but that has largely been credited to Aymeric Laporte’s long-term injury, and a lack of alternative replacements. In the league, 2019/20 has been the second leakiest season defensively of Guardiola’s managerial career, topped only by his first season in English football.

But in Lisbon things went to another level, and with Laporte playing the entire 90 minutes, that must worry his manager. Lyon have enjoyed a stellar Champions League run, but they finished the Ligue 1 season 28 points behind Paris Saint-Germain and only three inside the top half, and yet with every attack managed to bring back memories of Guardiola’s cumbersome 2016/17 defence all too easily. According to Opta, Lyon have not fashioned more ‘big chances’ in any of their eight previous Champions League games this season.

City were playing a dangerous game deploying a high line against a pacy Lyon front line, but with the usual intensity of their pressing, the hope would have been that service to Karl Toko Ekambi and Memphis Depay would have been sparse.

But the ease with which Lyon defender Marcal had time to look up, pick out Ekambi’s run and then play him in behind for the opening goal made it clear something was awry.