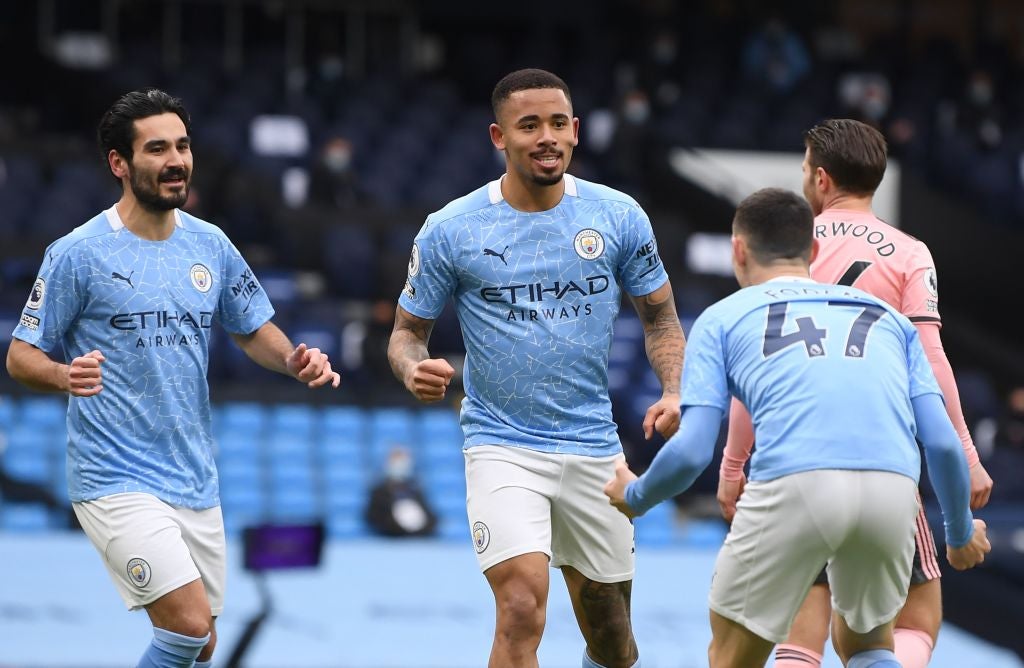 Gabriel Jesus celebrates his early winner against the Blades

It owed everything to Ferran Torres. On his first league start since Boxing Day, the summer signing from Valencia did brilliantly to keep the ball in at the byline and protect it from not only Jayden Bogle but Ethan Ampadu too. Having wriggled away from both, he picked out Jesus unmarked in the six-yard box, leaving him with a simple finish.

The only other notable aspect of the first half was both sides apparently forgetting how to take a throw-in. Before Jesus’ breakthrough, a foul throw by Bernardo was immediately followed by one from the visitors that went directly out of play. Oleksandar Zinchenko was penalised for another foul throw midway through the half.

It was not all bad, though. In fairness to Sheffield United, they were holding their own, coping with the few City forays that came their way and did well to prevent the league leaders from converting all their possession into clear-cut scoring opportunities.

The first half’s walking pace continued into the second, with only a few speculative efforts for distance enlivening the final stages. The much-maligned Aaron Ramsdale denied Oleksandar Zinchenko and Jesus with fine one-handed saves either side of Fleck’s chance – a swerving strike from the edge of the penalty area that dropped just wide.

But for the Blades, that was as good as it got. Wilder would not have expected much more than that at the start of the day and will take heart from the performance on the whole. Guardiola, meanwhile, celebrates his 500th career win in management and City march on in a manner that is not as breathtaking as what we have seen in the past but still brutally effective.