Harry Kane did strike the woodwork for Spurs in the opening stages, but that free-kick was a rare moment of danger from the away side who barely threatened in open play.

City took the lead through Rodri’s penalty after Ilkay Gundogan was fouled, while Gabriel Jesus also hit the bar with a fierce drive from inside the box.

Gundogan then continued his own hot streak in front of goal, toe-poking in after the restart and showing great skill and composure to net a second midway through the second half. Here are the player ratings from the game at the Etihad Stadium.

Ederson – 7. Didn’t have much to do in terms of goalkeeping but did claim an assist on City’s third!

Joao Cancelo – 8. Superb in open play, a creative outlet with a typically good range of passing. Defensively solid throughout.

John Stones – 7. Not overly tested. Stood up to the physical challenge well and had no runners in behind.

Aymeric Laporte – 7. Not at his sharpest with a couple of longer balls aimed his way but fared largely well on the cover.

Oleksander Zinchenko – 7. Neat passing, good work rate and solid with the little he had to do defensively.

Rodri – 8. He just continues to dominate games from deep, not allowing runners to impact and picking up loose balls in space.

Bernardo Silva – 7. Quietly effective, rarely giving up the ball, taking up clever positions and setting the platform for his attacking team-mates to run off.

Ilkay Gundogan – 8. Two more goals in an incredible run. The second goal was brilliant all around: first touch, feint, skill and finish.

Raheem Sterling – 9. Non-stop running, set up plenty of chances, dribbled past players with ease and claimed an assist.

Gabriel Jesus – 7. Lots of movement in the final third to open up spaces, though he might be frustrated to have missed a chance or two.

Phil Foden – 7. Clever with his link play, though not as clinical with his final pass or shot as he has been in recent games. 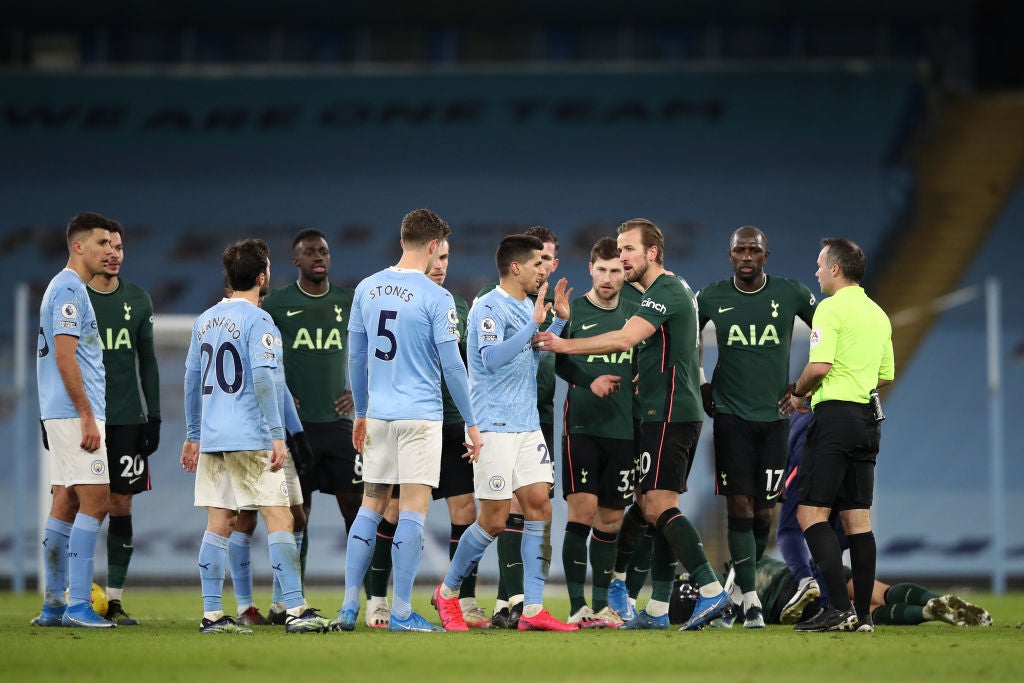 Hugo Lloris – 4. Should have done better with all three goals in truth. Is in a poor run of form.

Japhet Tanganga – 6. Solid in the challenge but there’s too little cohesion in this defence for him to come in and quickly excel.

Davinson Sanchez – 5. Made a great block on Gundogan, but later made it far too easy for the midfielder to score the killer third.

Eric Dier – 5. Sometimes he looks very strong as a centre-back, winning aerials, passing out well and working in conjunction with his partner. Today was not that today.

Ben Davies – 4. Was given an absolutely torrid time by Sterling. Didn’t get near him at all.

Pierre-Emile Hojbjerg – 5. Gave away the penalty with a clumsy foul and didn’t really affect the flow of play at all.

Tanguy Ndombele – 5. Lots of running, little quality on the ball, no support on the counter.

Lucas Moura – 5. An anonymous first half saw him subbed at the break.

Erik Lamela – 4. Had a lively opening few minutes but then seemed more bothered about ongoing personal battles than actually launching attacks for his team.

Son Heung-min – 4. Barely had a kick in the final third.

Harry Kane – 5. Poor hold-up play was a bit of a surprise, but then he had barely any support the few times he got the ball. Did almost score twice, though as one was a rebound off his head while he was looking the other way, it doesn’t really count as a chance.

Is this football’s greatest superfan? 1,503 matches in a row and still counting…