Manchester United have been locked in talks with the Premier League about the potential postponement of Tuesday’s (Wednesday morning AEDT) game at Brentford after a COVID-19 outbreak forced the club to close its training ground and threw its preparations into disarray.

In an attempt to minimise the risk of further infection, United shut down first-team operations at their Carrington headquarters on Monday, cancelling training and ordering the squad to stay at home after a number of positive cases among players and staff were confirmed. 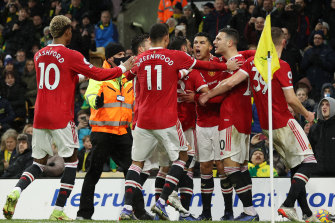 Manchester United have shut down their first team training operation and may need to reschedule their mid-week game against Brentford.Credit:Getty Images

The news came as the Premier League confirmed 42 new positive coronavirus cases among players and staff at their 20 clubs over the past week, comfortably the most in a one-week testing period and 30 more than a week earlier, amid deepening concerns about the situation.

In addition to United, Arsenal, Leicester, Aston Villa, Brighton and Norwich have all confirmed positive cases. Tottenham’s game against Brighton on Sunday had to be postponed due to a COVID-19 outbreak at the north London club, which also led to the cancellation of their Europa Conference League tie against Rennes last week.

United were due to travel to London on Monday afternoon, but those plans have been put on hold while they await the outcome of their talks with the Premier League.

United’s main concern revolves around safety and preventing further spread of the virus but their preparations for another key match in their pursuit of Champions League qualification have also been severely undermined.

Training was disrupted on Sunday when a number of individuals returned positive lateral flow tests and had to be sent home. The session had to be modified to become non-contact, no indoor recovery work was permitted and training was cancelled on Monday.

Carrington was not completely closed, with the United women’s team and academy operations continuing as normal in their own segregated bubbles.

Sources at Old Trafford said it was too early to say if the weekend’s game at home to Brighton would also be under threat.

The Premier League has implemented emergency measures in an effort to stymie the threat of the virus, including a move to three tests a week, increased social distancing in training and the use of masks in indoor settings. The English Football League has reintroduced similar measures and is continuing a campaign to get more players vaccinated.

Meanwhile, Ralf Rangnick, United’s interim manager, has told Anthony Martial he should inform the club if he wants to quit Old Trafford.

Martial’s agent, Philippe Lamboley, told Sky Sports on Friday that the France striker wanted to leave United in the transfer window next month, which Rangnick said was news to the club.