Scott McTominay has revealed there are no hard feelings when it comes to Neymar after the pair’s fiery altercation in last night’s Champions League showdown. The duo were relishing the competitive nature of the clash as PSG ran out 3-1 winners at Old Trafford, leaving United with work to do in Leipzig to qualify.

McTominay was evidently fired up for the contest and put in a crunching challenge on Neymar to set the tone.

The Brazilian then appeared to grab McTominay’s manhood, before the duo came together on the stroke of half-time.

Neymar went on to have the last laugh though as he scored his second to seal the points for last season’s runners up late in the second half.

After the game, McTominay shed light on the words that were exchanged between the two players at the interval before insisting there are no hard feelings towards his opponent.

JUST IN: Man Utd transfer deal for Hakan Calhanoglu ‘will happen’ with talks advanced with agent 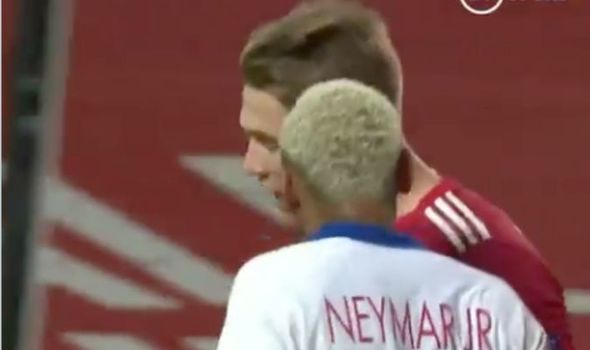 “It was fine, that’s football,” he told Esporte Interativo.

“He’s a top player. He says some funny things which obviously I can’t say.

“But that’s football, you know, people get angry, it gets heated, but as I say, he’s a terrific player and I have nothing but good things to say about him.”

Ole Gunnar Solskjaer praised McTominay for continuing without a fuss after the incident with Neymar.

The United boss said: “I don’t want to comment on opposition players. My players know my values. I want honest players.

“Scotty could have gone down when Neymar grabs his gentle parts but I don’t want them to do that.”

The PSG players were doing their utmost best to get Fred sent off too, although the Brazilian done himself no favours.

He should have walked for pushing his head into Leandro Paredes in the first half but escaped a red card, even after a VAR review.

The referee did eventually give him his marching orders in the second half for a second bookable offence.

In a separate interview, McTominay highlighted his frustration at the way the PSG players conducted themselves.

He said: “The reaction of their players is [shakes head]…

“I’ve got nothing to say about that, you get in trouble if you start speaking about that and the referee. 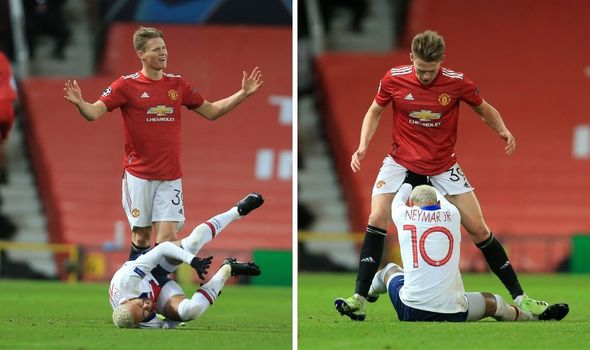 “I said at half-time if we don’t get anything from this game then we should be coming in disappointed and angry with each other.

“It’s a tough pill to swallow when you see how the game pans out, it was a sloppy goal to conceded then the way we played after that was brilliant, the way we approached the game was total focus.

“I’m hearing their goal was partly offside as well. For us where is the balance in the game with how the referee has approached decisions?

“We’re seeing mistakes week in, week out, for us it has to be rectified, get football back to the way it was.”