Manchester United boss Ole Gunnar Solskjaer has promised fans Donny van de Beek will be vital for the club. The Netherlands international impressed as the Red Devils beat Brighton 3-0 in the Carabao Cup on Wednesday night. And it was just his second start for the club so far following his £40million move from Ajax last month.

Manchester United beat Brighton for the second time in a week on Wednesday night.

The Red Devils rotated for the Carabao Cup showdown and opened the scoring through Scott McTominay in the first half, with the Scotland international nodding home Juan Mata’s cross.

Mata himself then doubled United’s lead, with Paul Pogba adding gloss to the win via a deflected free-kick having been introduced in the second half.

Van de Beek was impressive for United throughout the contest, dropping into spaces and giving license for the attacking players on show to roam.

And Solskjaer, speaking after the game, has promised fans the Netherlands international will be ‘vital’ having failed to start in the Premier League so far. 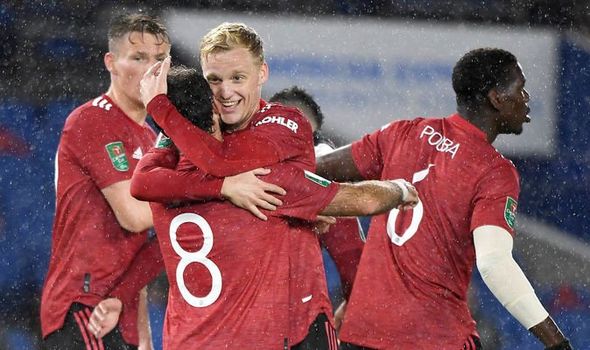 “We know how many games we’re going to play and he’s going to be vital,” Solskjaer said.

“He’s proved in every game he’s been a part of that he’s got high quality.

“He’s such a clever mover, he plays the game simply but effectively, with high quality. He’s knocking on the door.”

Solskjaer also hinted he could give Van de Beek a new role.

The Dutchman ended the Brighton game playing on the left wing, a position firstly occupied by the ineffective Daniel James. 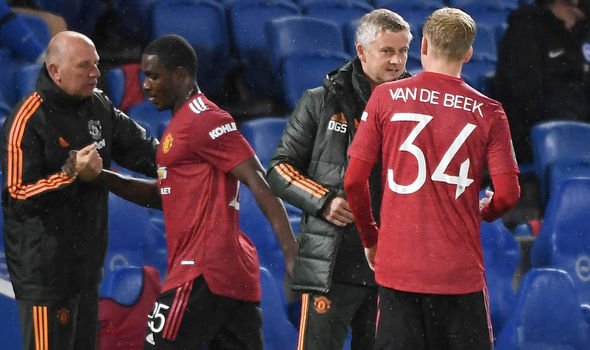 “Dutch football is tactical – he knows football, he’s got his head screwed on.

“He’s a different type of left-sided player compared to Dan James and Marcus Rashford, but coming inside and finding good pockets, why not?”

On the performance, Solskjaer added: “It is never easy coming away against a Premier League team and they put a strong team out as well, and gave us a good game.

“I think the first 20 to 25 minutes was two teams needing a bit of confidence to get into the game.

“The rhythm wasn’t really there and it probably looked like a 0-0 draw and a penalty shootout.

“But then we had some good play. The first opening, Juan made a great run to create the chance for Odion and that could have been a goal.

“The 1-0 goal as well, it was marvellous work from Juan and a great delivery.”

United are next in action against Tottenham on Sunday (4.30pm).

The Red Devils won 2-1 when they met at Old Trafford last season, with Rashford at the double in a stirring win.