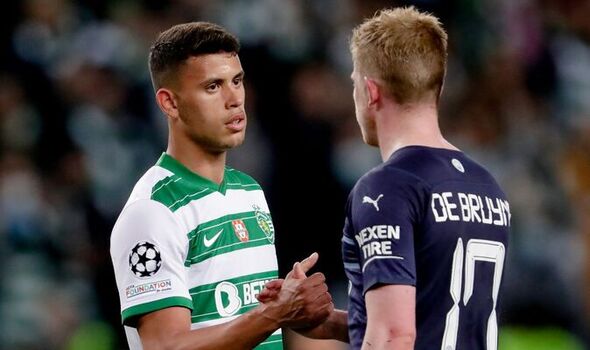 Manchester United have found themselves closely linked with Porto’s Vitinha in the past few days but there is an even better midfield signing from the Primeira Liga, there to be sealed. Just ask Pep Guardiola. Sporting’s Matheus Nunes is beginning to get people talking, not least because of continued transfer speculation linking him with a summer move to the Premier League.

United are not currently in the frame with Newcastle, Wolves and Everton among those earmarked as potential suitors but the Red Devils should definitely consider throwing their hat into the mix, given Nunes can just about do it all.

He’s no Darwin Nunez but he is an all-action, technically-gifted maestro that is capable of stamping his authority on the game.

Nunes has been building his reputation quickly in the Portuguese capital, where he has gone from a young, fresh-faced kid to one of the country’s most consistent performers in a matter of years.

The 23-year-old looks set to make the Portugal squad for November’s World Cup in Qatar and he’s only going to get better. At his current rate of development, he is on course to become one of the best of his ilk in Europe.

United should be looking to throw their hat into the ring, given there appears to be some legs to links with Vitinha.

This time last year, the 22-year-old was told Wolves wouldn’t be triggering their option to buy the player, who returned to Porto.

Now a big move could pay off but still, there will be elements of doubt as to whether Vitinha can cut it in England.

Meanwhile, Manchester City boss has already ruled that Nunes is one of the best players in the world.

He said in February after City’s first-leg Champions League knockout win over the Portuguese side: “Sporting are a fantastic team, they are the champions of Portugal, which have a very strong league, with Porto and Benfica, they change the ball well, they have fast and intelligent players.

“I would say that Matheus Nunes is one of the best players in the world today. Despite the difficulties and some mistakes, I have to be very satisfied because we took a big step towards the next round.”

Nunes is primarily a No 8 who can also play in defensive midfield or attacking midfield and is currently valued at £31.5m by Transfermarkt, which is less than Vitinha’s £34m release clause.

Whether Sporting would approve his exit at that figure is another question altogether and furthermore, Nunes has actually shown a willingness to stay at his current side for the foreseeable future.

“My goal is to fulfil the contract (until 2026)”, he told Portuguese newspaper Correio da Manha.

“I have a contract with Sporting. There is no point transferring me. I’m happy at Sporting. The Portuguese league is a great league.”

United do have two secret weapons up their sleeve though in the form of Cristiano Ronaldo and Bruno Fernandes.

Both have close ties to former club Sporting and they also play with Nunes for the Portugal national team.

If he was to show an interest in a move to the Premier League, there is no reason why he wouldn’t be open to joining United, if they were ready to commit to the player.

Nunes is a generational talent with a huge ceiling and if the Portuguese market is one United are going to explore, they would be foolish not to at least consider a swoop for the Sporting man.