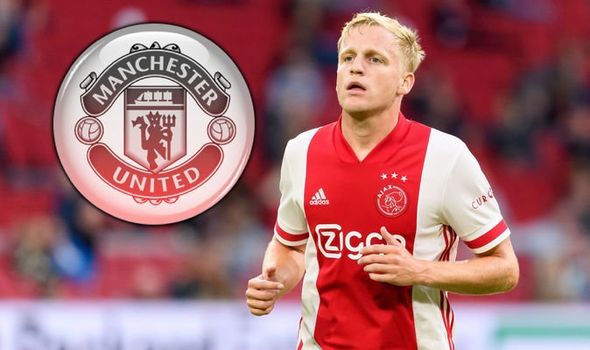 Manchester United expect to clinch the £40million signing of Ajax midfielder Donny van de Beek with Ole Gunnar Solskjaer having played a key role in convincing the Netherlands international to move to Old Trafford, according to reports.

The Red Devils have yet to make a signing this summer having concentrated their efforts on landing England winger Jadon Sancho from Borussia Dortmund.

But having had long-standing interest in Van de Beek, United are now closing in on bringing the 23-year-old, who was left out of the squad for Ajax’s friendly with Eintracht Frankfurt on Saturday.

Ajax boss Erik ten Hag admitted of the Barcelona-linked midfielder: “There have been some developments that made us decide us to keep him out of today’s squad.

“We will see what happens. We’ll make an announcement as soon as there’s some clarity.”

Now, the Daily Mirror say United are closing in on his signing and expect to wrap up a deal with neither Barca or Real Madrid having acted on their interest in the Dutchman, who has been on the radar of several of Europe’s biggest clubs for some time. 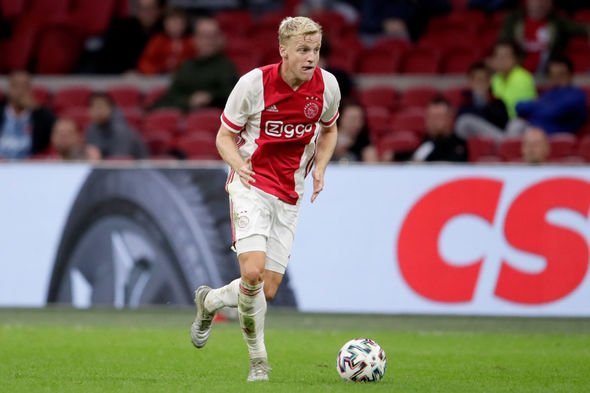 It is added that Solskjaer has been granted permission to hold further talks over the next 48 hours having already told the player that he sees him playing a key role in his team.

The Norwegian coach is said to have told the attack-minded midfielder he can help United to bridge the gap to Liverpool and Manchester City at the summit of the Premier League.

The Mirror add that, via sources, unless Barca or Real Madrid submit a late bid then Van de Beek will become a United player.

New Barca boss Ronald Koeman knows him well having managed him with the Netherlands national team and is a huge admirer.

Koeman also likes the look of Liverpool’s Gini Wijnaldum, out of contract at Anfield next summer, and was dreaming of an all-Dutch midfield also comprising of Frenkie de Jong, Van de Beek’s former Ajax team-mate.

But whether the Catalan giants have the cash to rival United remains to be seen and they are currently distracted by the ongoing drama of captain Lionel Messi seeking to quit the Nou Camp.

Such uncertainty in Barcelona, it has been suggested, prompted Solskjaer to make a move for Van de Beek as United also struggle to land Sancho from Dortmund.

The player produced 10 goals and 11 assists in 37 games for Ajax last term after mustreing 17 goals and 13 assists in 57 games the season before, when his club reached the Champions League semi-finals only to be downed by Tottenham in the final four in dramatic style.

He agreed a move to Real Madrid earlier this year only for the COVID-19 crisis to scupper Los Blancos’ plans. 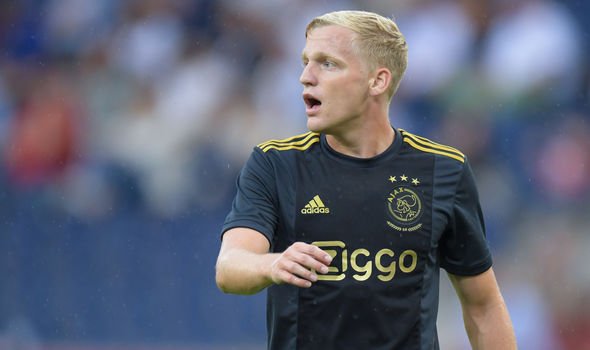 And Van de Beek reportedly is not willing to wait for Barca to make an offer of their own because he does not want a move away from Amsterdam to collapse again.

He will help form an all-star midfield at United with Bruno Fernandes and Paul Pogba as Solskjaer looks to hunt down Liverpool and City.

The Red Devils get their Premier League campaign underway a week later than most of their rivals due to their involvement in the Europa League earlier this month.

Their curtain-raiser will come at home to Crystal Palace on Saturday 19 September, with the game to be televised by Sky Sports with a 5.30pm kick-off.