Manchester United are poised to pursue Jadon Sancho with everything they’ve got with the transfer deadline creeping closer. And fans on social media think Matt Judge flew out to Germany over the weekend to negotiate a deal for the Borussia Dortmund star. Ole Gunnar Solskjaer feels the 20-year-old would be a vital signing, one capable of shining alongside Marcus Rashford, Bruno Fernandes and Anthony Martial in his attack.

Manchester United have spent the entirety of the transfer window chasing Sancho.

But, so far, they’ve found Dortmund to be tough negotiators with the Bundesliga giants demanding a huge £108million for their prized asset.

United have insisted they won’t be meeting that huge asking price and have alternatives on their radar, with Juventus’ Douglas Costa and Inter Milan’s Ivan Perisic both of interest.

But fans on social media think they’ve now spotted a clue that suggests the England international could be on his way to the Theatre of Dreams.

A United fan has tweeted pictures of two flights and claims that the same plane in the images was used by Judge to conclude a deal for Donny van de Beek, who arrived from Ajax earlier in the summer.

“This is the same plane that Judge took to Amsterdam to finish off the VDB deal,” @ORohitO said. “It was used to head to Dortmund and back to Biggin Hill (London over the weekend).”

He then did a second tweet, saying: “I can only share what I see or know. This is what I see. Conclude from here what you may and don’t shoot the messenger.”

Fans have been quick to respond to the message on social media, with one saying: “Sancho will play against Spurs lets go!”

A second said: “It’s going to be a great week.”

“Yeah I’m definitely getting gassed for this now,” were the words of a third excited supporter. 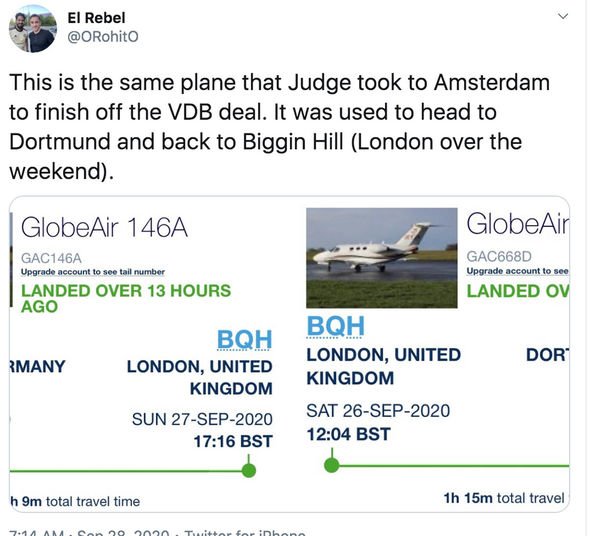 And a fourth chipped in with: “We pray for the best!”

Dortmund have seen Sancho shine early on this season, with the England star managing one goal and one assist from two league matches so far.

But he could now be on his way to United, with the 20-year-old eager to play alongside close friends Marcus Rashford and Jesse Lingard at Old Trafford.

Meanwhile, speaking recently, Sancho opened up on his career so far and how he had to work hard to realise his dreams of being a professional footballer.

He said: “From the age of seven I went to boarding school.

“I had to change my ways. At eight or nine that was when I had the manners and started to conduct myself better.

“I just had to motivate myself. When I left home that was the toughest year I had once I left my mum or sisters.

“All I knew was south London. My head was just gone. I was getting into detention.”

When asked about his influences on and off the pitch, he said: “On and off, it hasn’t been just one person. When I see my friends play that motivates me.

“When they do well that motivates me. And also people that helped me like my mum and dad.”