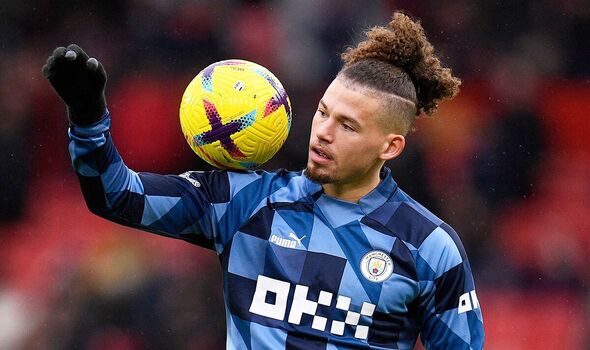 Manchester United fans directed a savage chant at Kalvin Phillips during Saturday’s derby at Old Trafford. Supporters seemingly referred back the claims by Pep Guardiola in December that the Manchester City star had returned from the World Cup overweight.

Phillips has struggled with injury problems since joining City from Leeds last summer. He has made just two Premier League appearances this season, both as a substitute.

He was again on the bench for the trip to United on Saturday. And the home supporters jokingly sang about him as he warmed up early in the second half.

Thousands of fans at the Stretford End chanted “get your t**s out for the lads” towards Phillips. The 27-year-old perhaps had the last laugh as City took the lead just minutes later through a Jack Grealish header.

Phillips cost City £45m but has not had the start he or Guardiola would have wanted to his Etihad career. He underwent surgery on a dislocated shoulder in September, which put his participation at the World Cup in doubt.

England boss Gareth Southgate still selected Phillips despite doubts over his fitness. He made two substitute appearances in Qatar before the Three Lions were eliminated.

Guardiola told reporters upon his return as to why Phillips was not involved in the team. The Spaniard said: “He’s not injured. He arrived overweight. I don’t know [why]. He didn’t arrive in the condition to do training sessions and to play.

“That’s why he cannot play. When he will be ready, he will play, because we need him, we need him a lot. It’s a private conversation with Kalvin.”

However, the issue was seemingly resolved just a few days later. Guardiola insisted he needs Phillips at the peak of his powers ahead of the busy schedule.

He has since said: “He has the perfect body now – so sexy. We will see for the weekend.

“He has spent the first part of the season out with surgery to arrive for the World Cup – and did everything to get to the World Cup. It’s not just about just being fit you also have to understand what we want to do, the movements etc.