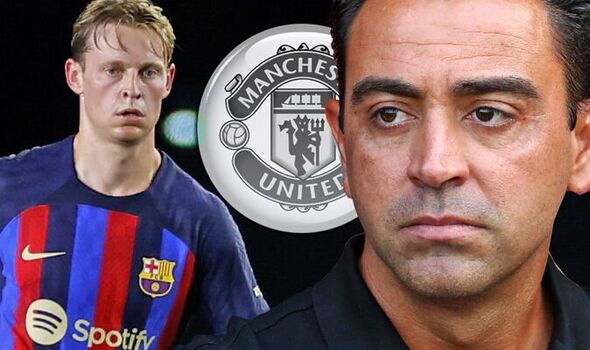 Manchester United’s hopes of finally bringing Frenkie de Jong to Old Trafford have been boosted thanks to Xavi green-lighting the Dutchman’s exit from Barcelona, according to reports. The Red Devils have been locked in talks over a move for De Jong for some time but are yet to push a deal over the line despite months of protracted negotiations.

A transfer fee has reportedly been agreed between United and Barcelona but the move is being held up by a handful of complications, including the player’s desire to remain at the Nou Camp and a series of deferred wage payments that are still owed to him. Xavi was previously thought to be determined to keep hold of De Jong but has since changed his stance by giving the go-ahead for the midfielder to be sold, according to AS.

It is claimed that Xavi is aware that Barcelona will need to raise funds in order to tackle their desperate financial situation and has sanctioned De Jong’s exit as a result. The Spaniard is refusing to rule out the possibility of United failing to land their man, though, and will be expecting De Jong to fight for his place in the Barcelona side next season if the move does not materialise.

It remains to be seen whether United will be able to convince De Jong to join their ranks in advance of the new campaign, with the player seemingly keen to stay at Barcelona despite the lure of a reunion with Erik ten Hag, who managed him during his time at Ajax. The United boss is said to have identified his former player as a priority target but has been left frustrated over the club’s inability to wrap things up with regards to the move over the last few weeks.

The Red Devils have also been held back in their efforts to land De Jong by a series of outstanding wage payments that are yet to be made by Barcelona. He agreed to defer a significant chunk of his salary during the COVID-19 pandemic, with his annual wage being reduced by around £9.4m in 2020/21.

He repeated the gesture last season by taking a £4.3m pay cut, meaning that he is owed £13.7m in basic unpaid wages by his current employers as well as another £3.4m in waived bonuses. Ten Hag recently admitted that he would have liked De Jong to have already signed for United by now as he expressed his desire to conduct the club’s remaining transfer business in rapid fashion.

“That’s for sure,” Ten Hag told Sky Sports when quizzed on the long-running nature of the ongoing saga involving De Jong’s future at Barcelona.

“The best and the most perfect situation is when you start pre-season with the squad fully equipped, but most of the time that’s not the fact of football, so I am realistic and I have to deal with the fact.”

For the latest news and breaking news visit: /sport

Kylian Mbappe and Real Madrid ‘have agreed’ strategy for transfer