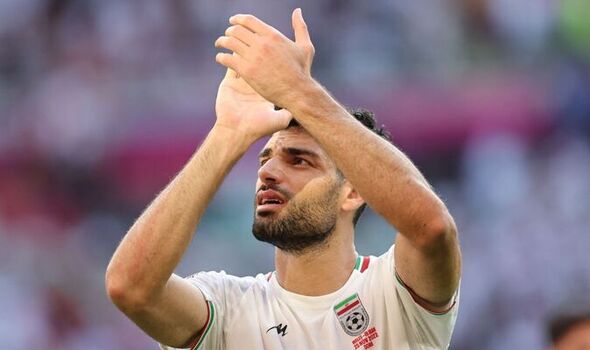 Manchester United are reportedly set to target a stop-gap striker signing in January to see the through until the end of the season and what better place to search for a solution than the World Cup in Qatar. Cristiano Ronaldo’s departure by mutual consent has intensified the need for attacking reinforcements this winter and although CR7 has not always been first-choice this season, he will still need replacing.

Reports suggest United are keen on targeting a short-term signing that will allow them to go big on a new marquee No 9 this summer.

The Red Devils are said to be open to an Odion Ighalo-esque signing that will help them with some extra goals between now and the end of the season.

But United may require more quality than that to maximise their chances of securing a top-four finish and potentially some silverware in the second half of the campaign.

One player that has put his name up in lights at the World Cup is Iran’s Mehdi Taremi, who scored twice in his side’s 6-2 opening defeat to England earlier this week.

His ruthless finishing really caught the eye despite England’s dominance after taking his only two chances of the game in confident fashion – including a late penalty.

But the eye-catching performance was also backed up with an excellent, selfless display in Iran’s 2-0 victory over Wales.

Taremi led the line in exemplary fashion, holding the ball up and pulling the 10-man Wales side out of joint.

He was also responsible for Wayne Hennessey’s red card after being the Wales goalkeeper to the ball. The extra man would eventually prove the difference for his side.

Carlos Queiroz’s prolific frontman has 60 goals and 38 assists in the Primeira Liga since moving to Portugal with Rio Ave in 2019.

He was signed by Porto after just one season in Portugal and he has continued to rip it up at the Estadio do Dragao ever since.

The 30-year-old would represent great business from United if they were daring enough to push ahead with an unlikely move.

In Taremi, they would be signing an experienced, well-rounded centre-forward capable of scoring goals and affecting the game in the final third of the pitch.

And for anyone that has doubts about whether he would be able to cut it in the Premier League, the forward has already proved his worth at the World Cup and in the Champions League.

Surround him with better plays and Taremi could even reach new heights in terms of goals and statistics.

United’s biggest problem would be enticing Porto into a sale mid-season, particularly given Taremi is one of their most-prized assets.

Furthermore, the project could prove a difficult sell if United are indeed set to sign another striker this summer which could effectively minimise Taremi’s chances of playing regularly.

Nonetheless, it’s an exciting, worthwhile option worth considering. With no other Premier League clubs expected to be in the mix – it could give Erik ten Hag’s side an edge post-January.