Manchester United are ready to test West Ham’s resolve with a substantial bid for midfielder Declan Rice this summer, according to reports. Rice has enjoyed an impressive season for the Hammers and has attracted plenty of attention from rival clubs.

The 22-year-old midfielder was a key part of West Ham’s strong campaign which ended with a sixth-place finish in the Premier League.

Rice made 35 appearances across all competitions for David Moyes’ side, anchoring the midfield and showing his range of abilities.

United are not the only side interested in signing Rice, with Chelsea long-term admirers and Manchester City also in the picture.

Moyes has repeatedly stressed that West Ham have no intention of selling their most-prized asset and are under no pressure to do so, with Rice under contract until June 2024.

However, the Evening Standard reports that United are ready to test that firm stance by making their interest clear in the summer transfer window, which opens on June 9. 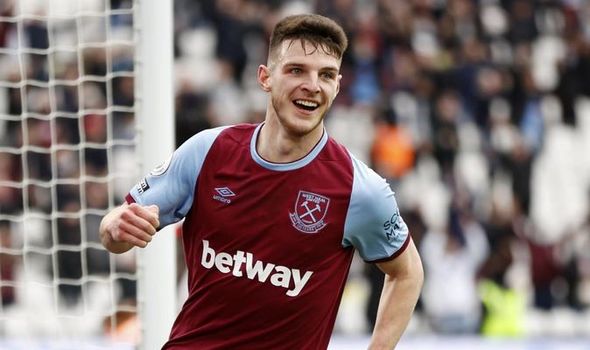 United are under pressure to make a splash in the summer transfer window after suffering defeat on penalties against Villarreal in the Europa League final on Wednesday.

Ole Gunnar Solskjaer told reporters in Gdansk that United need “two or three players to strengthen the starting XI” in order to improve on their efforts in the 2020/21 season.

United are targeting a holding midfielder as well as a centre-back to partner Harry Maguire and a forward, with Borussia Dortmund’s Jadon Sancho a possible arrival.

While United’s need for a player of Rice’s calibre is clear, they may find it hard to tempt West Ham to sell, with the Hammers looking forward to a campaign in Europe.

“I don’t think [owners] David Sullivan, David Gold or myself have any intention of losing Declan Rice,” Moyes said after West Ham’s 3-0 win over Southampton on the weekend.

“We have just qualified for Europe, I think it is a brilliant achievement and Declan is a big part of that and we want him to be a big part of what we do next year as well.”

Even if West Ham agreed to sell, they would likely have to surpass the club-record £80million transfer fee they paid Leicester for Maguire in August 2019.

“I look at the players who have joined some clubs from overseas and come in and nowhere near had the impact Declan Rice would have.

“I certainly wouldn’t put a price on it. You can decide which figure you want to put on it but I wouldn’t be sanctioning anything like that, that’s for sure.”

United vs Leeds: The hostile game English football has been missing