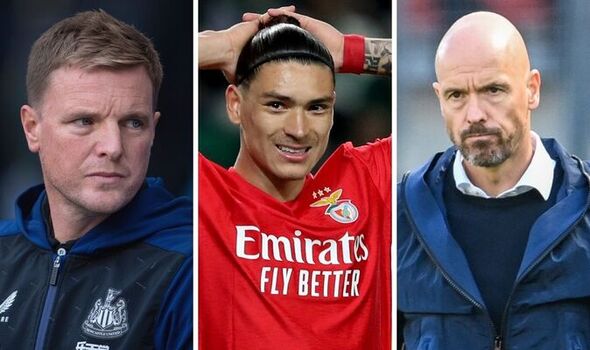 Manchester United may have to get moving if they want to sign Darwin Nunez as Erik ten Hag’s new marquee striker with Newcastle reportedly preparing a £60million bid for the Benfica frontman. It’s no secret that the Uruguayan international is on the Magpies’ radar but there have been question marks surrounding the size of Eddie Howe’s summer transfer budget due to Financial Fair Play restrictions in the aftermath of excessive January spending.

Newcastle’s new owners kickstarted the new era in style with a £90m January spree that has helped preserve their top-flight status with two matches to spare.

Things were looking bleak heading into the New Year but Howe and his backroom staff have turned things around with a helping hand from Yasir Al-Rumayyan’s chequebook.

But Newcastle are only really just getting started and according to Brazilian journalist Bruno Andrade, a £60m bid for Nunez could be submitted imminently.

The Primeira Liga club are believed to be looking for at least £67m to agree to a sale – although the vast level of interest is likely to drive up their asking price.

Manchester United are also serious about signing Nunez, who could be the new face of Ten Hag’s new Old Trafford project.

The Dutchman, who secured the Eredivisie title last night as Ajax thrashed Heerenveen 5-0, knows Nunez well after the striker dumped his current side out of the Champions League.

Nunez rose highest to power home a header at the AmsterdamArena in March in the last-16 second leg, before going on to score in both quarter-finals against Liverpool.

The performances have seen his stock skyrocket with the forward now boasting 34 goals in all competition this season.

Benfica are planning to encourage a bidding war this summer to maximise the final figure they receive for their talisman.

Arsenal and West Ham are also open to signing the prolific 22-year-old, providing the asking price is considered affordable.

Atletico Madrid have also held discussions with Nunez’s current reps – although he is set to link up with super-agent Jorge Mendes ahead of the summer window.

Liverpool boss Jurgen Klopp has already offered a glowing reference of Nunez, who he believes has all the attributes you would want in a modern-day No 9.

“Extremely good-looking boy and a decent player as well,“ said Klopp after the 3-3 draw at Anfield, in which Nunez scored.

“Really good, really good, I have to say. I knew him before, of course, but he played pretty much in front of me with these tough battles with Ibou Konate.

“Physically strong, quick, was calm with his finish when he finished the goal off. Good, really good. If he stays healthy, it’s a big career ahead of him.”