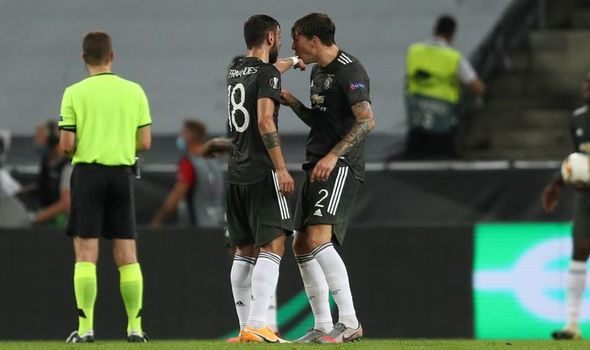 Manchester United star Bruno Fernandes confronted Victor Lindelof after Sevilla scored their winning goal through Luuk de Jong. The Red Devils suffered their third semi-final exit of the season and the Portuguese was furious with his team-mate.

Lindelof got himself in a bad position allowing de Jong to tap home past a helpless David De Gea.

But after the match Fernandes insisted it was a natural reaction in such a high pressure situation.

He said on BT Sport: “It’s normal when you concede. It’s not about me or Victor. What happened between me and Victor is normal.

“It will happen many more times in football. We need to see the mistakes everybody did and improve.”

Despite the incident with Lindelof, Fernandes felt United were much the better team in the Europa League semi-final.

He explained: “More than a positive start. We played a great game and created a lot of chances. But in football it’s not enough – we missed a lot in front of goal.

“We are not satisfied about this because we wanted to go through. Now it’s time to rest and refresh the legs.

“Their keeper did very well, but the quality we have we should have scored.”

Fans may not be allowed into grounds until the New Year