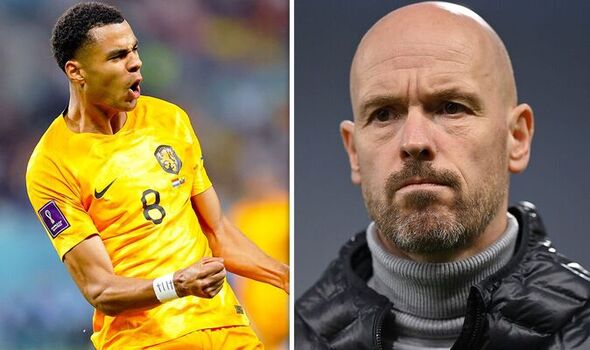 Manchester United must wait until at least after the World Cup to open any talks over the signing of Cody Gakpo, according to reports. United are keen on signing the Netherlands star in January but they will have to be patient.

Gakpo has built on his superb season at PSV Eindhoven last term by having a stunning start to this campaign. He has nine goals and 12 assists in 14 Eredivisie appearances, as well as five goal contributions in the Europa League group stage.

United were keen on a deal in the summer but instead signed Antony from fellow Dutch side Ajax for a fee of around £86million. Gakpo would likely cost less than Antony but his stock is only rising at the World Cup.

He scored the opening goal for the Netherlands in their 2-0 win over Senegal on Monday. The 23-year-old then scored a stunner against Ecuador on Friday.

Gakpo let fly with a powerful left-footed shot from outside the 18-yard box to show off his ability with both feet to put Louis van Gaal’s side into the lead.

Dutch journalist Marco Timmer gave an update on Gakpo’s future ahead of kick off. Timmer claimed interested clubs will have to pay more than £43m (€50m) for the versatile attacker.

However, there will be no movement on his future before the World Cup is over. Timmer says there will be talks between several clubs who are interested in the player.

He tweeted: “Gakpo update: Focus is completely on the World Cup, followed by talks between the management of the #PSV attacker and top clubs of the calibre Manchester United, Real Madrid, Liverpool and Bayern Munich. Certainly not a foregone conclusion that he is going. Target amount: 50 million plus.”

But United appear to be leading the way for his signature. When asked if United are the front runners, Timmer replied: “In my opinion, yes.”

United are in the market for attacking reinforcement in January. Cristiano Ronaldo had his contract terminated earlier this week to open up space in the squad and on the wage bill.

However, it remains to be seen how much money will be made available to Ten Hag in the winter window. United’s owners the Glazers are willing to sell the club, so their intentions in the transfer market for the remainder of their ownership must be in question.