Manchester United would be definite challengers for the Premier League title this season if they signed Tottenham striker Harry Kane, according to former Red Devils coach Rene Meulensteen. Kane is a long-standing transfer target for United and he revealed earlier this year he would be prepared to leave Spurs in search of silverware. However, a deal to take him to Old Trafford this summer would be extremely unlikely.

United have made just one signing so far in this window, bringing in Dutch midfielder Donny van de Beek for £40million.

But Meulensteen reckons a “top, top striker” is needed by Ole Gunnar Solskjaer, naming Kane as the perfect candidate.

“Obviously, there was a big, big gap there last year,” Meulensteen talkSPORT.

“And I think the gap started sort of in the early part of the season. 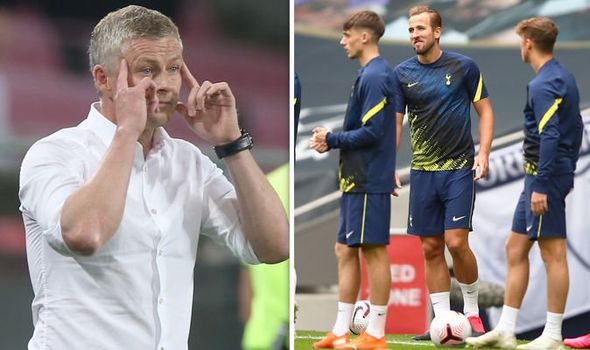 “What is vitally important is that United are going to have a really good start to the season so they don’t lose any ground, they are in there and they keep competing. Because that will grow the belief.

“I think with maybe another good signing, I keep saying they should bring in a really top, top striker.

“I think, for instance, if you were able to get Kane – I don’t think they would be able to get him – but if they would get Kane, I would say yes, they will compete for the title next year.”

Van de Beek’s arrival has led to question marks over the future of Paul Pogba.

Meulensteen reckons United won’t be able to play Van de Beek, Pogba and Bruno Fernandes together in every match but does not think that will bring about the end of the Frenchman’s second spell at the club.

“In certain games, you can get away with it because good footballers will always find a way to play with each other,” he added.

“[But] to insinuate does that mean Paul Pogba is gone? I’m not too sure.