A lifelong Manchester City fan, playing for the women’s team and receiving her first England call-up in April, Esme Morgan is living her dream.

Last season was something of a breakthrough campaign for the 20-year-old who speaks with a youthful exuberance as she tries to sum up a whirlwind 12 months that also saw her lift the FA Cup and make her Champions League debut.

“I still picture myself as a little kid running around doing what I love which is playing football,” Morgan exclusively told Sky Sports News.

“I think breakthrough is a really good word because coming into the season, I was perhaps a squad player but since the back end of the campaign I was able to increase my importance to the team.

“I massively enjoyed it despite us not getting as far in the competitions as we would have hoped and it’s good building blocks moving forward.”

The season before, Morgan went out on loan to fellow WSL side Everton, making 11 appearances for the club before coronavirus eventually curtailed the campaign in March.

Despite the short stint, Morgan credits the move as crucial to her development as well as providing a platform to showcase her talent to City from a distance.

“It was a massive opportunity to play at a really strong team at the WSL and gain invaluable match experience which I never had before,” Morgan said.

“I learnt so much from playing consistently every week and performing at a high standard not just in the games but in training.

“I knew that with the calibre of players at City that I wasn’t going to get that opportunity at the time but knew if I proved myself at Everton then I would come back and the opportunities would be there.”

Nevertheless, Morgan returned to Manchester and a club which was much-changed from the one she left, with a number of international stars signing on in what was one of the most successful transfer windows in the women’s game. 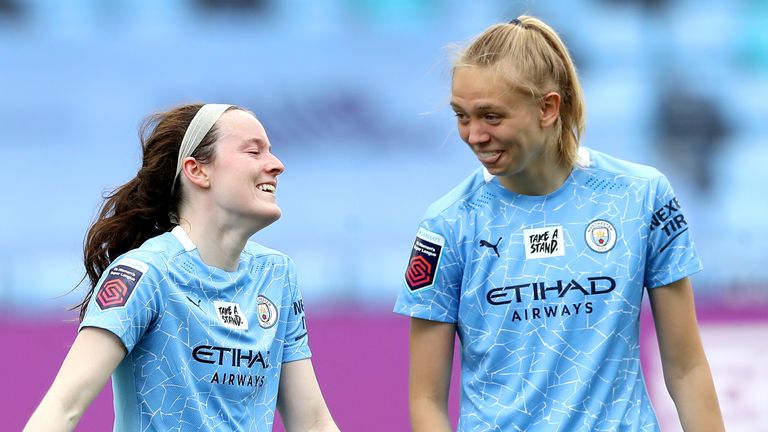 Among the big-name arrivals at Man City were Champions League winners Lucy Bronze and Alex Greenwood as well as US World Cup-winning duo Rose Lavelle and Sam Mewis.

For many, staking a claim in such a star-studded squad could have been a daunting prospect but a combination of Morgan’s quiet confidence and versatility (she can play either at full-back or central defence), as well as manager Gareth Taylor’s faith in her ability, has seen her flourish.

“Obviously I had a good spell on loan at Everton but even so, I feel like I have played a lot more than I expected coming into the season,” Morgan said.

“Being versatile has helped me slot in and get minutes here and there that I may not have picked up otherwise.

“Gaz (Gareth Taylor) was also so encouraging from the start, telling me he wanted me to be here and push myself alongside the calibre of players that we’ve got.

“You can’t help but learn in this environment, every single day you see a player do something outrageous where you think, ‘I need to put that into my own game’.

“I’ve watched Lucy (Bronze) really closely since she arrived at the club and there’s elements I can take from her to develop and it’s the same with the likes of Alex (Greenwood) and Steph (Houghton).

In total, Morgan finished the season having made 24 appearances for the club in all competitions, one more than City captain Steph Houghton.

It’s a far cry from watching her hero Houghton on the TV during the Olympics with Morgan very much proof that the London 2012 legacy lives on nine years later.

On those games, the Sheffield-born player said: “Steph (Houghton) was probably my first ever role model in women’s football.

“I only became aware of the women’s game because of the London 2012 Olympics and my first memory of watching women’s football was seeing Steph score a free-kick at Wembley on the TV.

“As a young girl who loved playing football how could you not be inspired by that? Someone scoring in front of 70,000 people and representing the nation.

“As soon as you see someone achieving what you want to do then it brings it more into reach and it’s so important for young children to have role models.

“She was a huge inspiration to me then and from that moment on I started following the England team and obviously being a City fan, Steph was always one of the main ones I looked up to along with Jill Scott and Karen Bardsley.

“It’s a bit surreal and crazy to now consider them as friends and team-mates and I am very lucky they inspired me at that age and got me into women’s football.”

With Houghton also renowned for her defensive versatility in the early part of her career, it could be argued Morgan is very much following in her childhood hero’s footsteps – moving from full-back to deputise for the injured Houghton in the heart of the defence in the second part of the campaign.

“They’re pretty big shoes to fill and I don’t think my feet are quite big enough to fill them!” Morgan said.

“I just try to take each game as it comes but recognised as soon as Steph got injured I was going to have a slightly bigger role to play.

“She’s been amazing supporting me from the sidelines and giving me advice as well which has made my life a lot easier coming straight into the team.”

‘This season has lit a fire inside me’

Although this summer’s Tokyo games may have been a tournament too soon for Morgan, the experience she has got this term with both club and country has spurred her on to come back even stronger next season.

“When I first got into the England camp, Phil Neville (then-England boss) was really honest and said the Olympics was probably going to be too soon for me and I completely understood that.

“For City, not progressing further in the Champions League and missing out on the WSL title after being so close has really lit a fire inside me.

“I am absolutely desperate to spend the summer getting better so I am ready to improve and hopefully take City to more trophies and be the most dominant team in the country.

“Having a taste for the England environment and the England camps is something I want more of too and if I establish myself more at club level it will inevitably give me more opportunities with England.

“Euro 2022 has always been the main target for me and I’m really motivated to become an important part of that squad.

“It would be an incredible occasion for the whole of the nation if we can take that opportunity and perform well at that tournament.”

Being immersed around so many international stars has also given Morgan an insight into what it takes to make it to the very top of the women’s game.

And although both World Cup winners Lavelle and Mewis are set to return to America to re-join their NWSL clubs, they leave Manchester and Morgan with a lasting impression.

“One of the things that has stood out for me by talking to the likes of Sam and Rose is their mindset,” Morgan added.

“Their desire to win all the time, even in training, is so competitive and they drive each other on.

“The ‘win at all costs’ mentality has developed over many years and Sam (Mewis) says it’s installed in their culture all the way back to when Mia Hamm was playing.

“So it’s followed right through from there and obviously it takes time to develop but there’s a lot of hunger in England to win as well.

“I think it’s just going to take a little bit more fight and an extra tiny bit more desire above the Americans and that extra bit of commitment to do whatever it takes to win to topple them.

“But I definitely think we’ve got the calibre of players technically, tactically and physically to challenge them and hopefully England can bridge that gap.”

Sky Sports has announced a three-year deal with the FA to become the primary broadcaster of the Barclays Women’s Super League from September 2021.

As one of the most competitive leagues, with some of the most famous names and teams in the world, the WSL will be one of Sky Sports’ flagship offerings.

The deal will see Sky Sports show at least 35 games exclusively live per season and further strengthens the broadcaster’s commitment to women’s sport.

Manchester City women’s player Esme Morgan was talking exclusively to Sky Sports News as part of a number of special interactive workshops for nursery school children on the importance of role models, run by the club’s City in the Community (CITC) foundation.