Gary Neville says Manchester United are “sleepwalking” into a top-four fight after their stuttering form continued with a goalless draw against Crystal Palace on Wednesday.

Ole Gunnar Solskjaer’s side produced a poor performance at Selhurst Park, only mustering one shot on target and missing the chance to open up a three-point gap on third-placed Leicester.

United were top of the league in January but they have only won two of their last eight Premier League games, falling 14 points behind Manchester City, who they face at the Etihad Stadium on Sunday.

Neville was disappointed by their “boring” performance against Crystal Palace and feels they are putting themselves at risk of falling out of the top four.

“We know the fans aren’t in the stadium, we know there’s been a lot of football, but they did look really lethargic tonight and well off it,” said the Sky Sports pundit. “The body language just looked really drained.

“I thought that progress had been made in the last few weeks and that they would cement that second place by picking up three points at places like Crystal Palace and against Sheffield United and West Brom, but they are now making it really hard for themselves.

“If you were Liverpool or Chelsea watching that tonight you’d be thinking, ‘we’re in with a right chance because they look leggy’.

“Manchester United have got to find something from somewhere.

“There was no urgency at the end of the game. You expected United to be throwing everything at it. You expected maybe some of the young lads to come on and do something to try and win the game, take a chance, take a risk, but there was almost a fear that maybe Crystal Palace would go and counter attack.

“It wasn’t a good night for United. You can’t have too many performances like that.

“I always said in the past when Louis van Gaal or Jose Mourinho were the manager, you can win, you can lose, you can draw, but you can’t be boring and that was boring tonight, watching that. 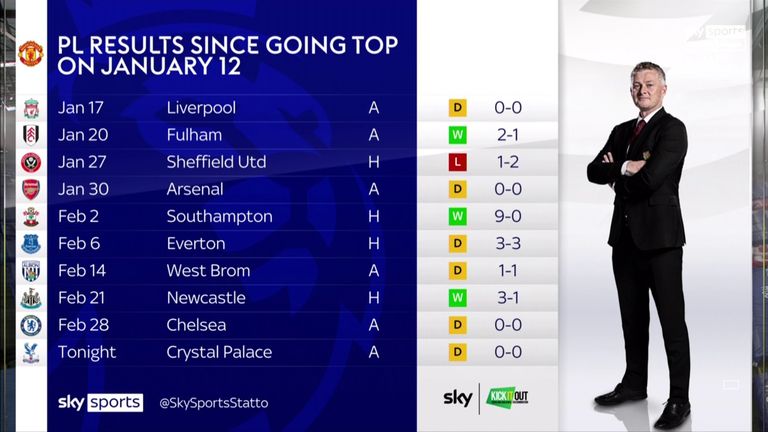 “They let games drift for large periods,” he added. “That’s happened in the big games where there’s been that lack of urgency and belief but now it’s starting to come against the teams at the bottom of the league.

“They are sleepwalking in games. They are thinking that they are okay, they will get a goal, because many times this season they have played badly in first halves of matches and then gone and won the second half. But now it’s not happening for them.

“You’ve got to have performances. You will get results sometimes when you play badly, but eventually it will catch you out. You need performances.

“There was a moment around Christmas when I thought performances were starting to come when [Edinson] Cavani had that run in the team and they were looking a bit better, but now performances are dropping back to where they were earlier in the season and they’re not getting results with them.

“They’ve got to be careful and become more alert to what’s happening because they are going to end up in a top-four race if they’re not careful.

“They were in a position a few weeks ago to have a comfortable run to the end of the season. They weren’t going to win the league, but they really could have cemented that second place and made it easy for themselves.”

Bruno Fernandes endured another difficult evening against Crystal Palace having struggled to reach his usual standards in recent weeks but Neville feels he’s not being helped by a lack of movement in front of him.

“He was sloppy from the first few minutes and he’s not been at his best this last couple of weeks,” said Neville.

“There may be a suggestion that he’s run himself into the ground and that could be true but you’ve got to have things happening in front of you as well and I thought Rashford on the left, Greenwood on the right, Cavani in the middle, they all stayed in their spots.

“When you watch the real fantastic front threes, and even this front three at times over the last few months, they are running diagonally across each other, there’s movement.

“There was no movement tonight. They were playing in straight lines which means for Bruno Fernandes, those two in midfield, [James] McCarthy and [Luka] Milivojevic, never got moved all night.

“Gary Cahill’s been a fantastic centre-back in the Premier League for many, many years but I didn’t see Greenwood or Rashford make a run in behind him.

“There was no movement, no urgency and they were static. That means Bruno ends up being easily marked and easily picked up.

“They were just too rigid tonight in that system and it ended up being too predictable and the only real threat came at points when Luke Shaw came forward on that side and put a little bit of energy into those overlaps.

“Other than that, it was nowhere near good enough. You won’t create chances in matches if you don’t take risks and you don’t make runs in behind and that’s what happened to United tonight.”

‘United must change mentality and approach to reach top’ 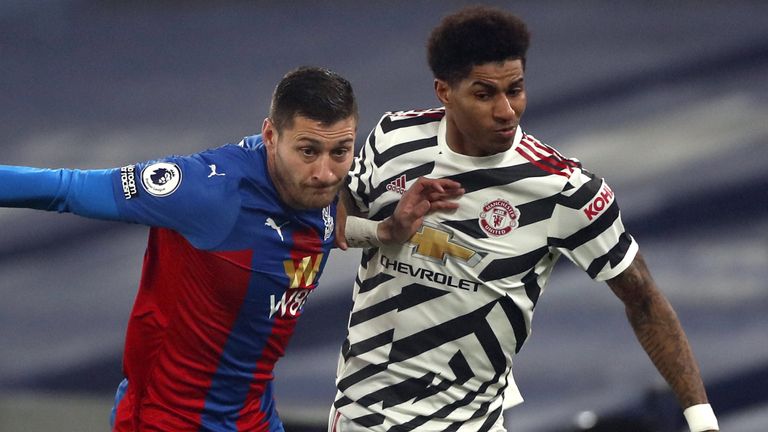 United now head to the Etihad Stadium on Sunday having failed to win any of their seven meetings with their big-six rivals in the Premier League this season and Neville believes a change of approach is required if they are to return to the top.

“They’ve got to have a back four that pushes up the pitch, they have to dominate possession.

“At this moment in time, this Manchester United team don’t have the belief in big games to go and grab them by the scruff of the neck.

“They’ve got to turn that mentality into one that they should win those games rather than thinking’ ‘we’re okay here with a point’.

“They’re nowhere near that level but they’re going to have to get there in the next 12 months or else the manager will come under pressure.

“There have been moments where I’ve thought there has been big progress. The record away from home has been really good. The resilience to be able to go 21 games unbeaten is some going.

“There are good things that are happening but you watch that tonight and you think it’s a step back. They can’t have too many of those.

“You’ve got to be dominant in games and this team is just a little bit too happy to sit back and play slowly and play on the counter attack.”

Solskjaer: We have to play better

Ole Gunnar Solskjaer added: “It’s not what we want, but that’s the football we’re playing in. We’re in the Premier League and you have to play better to win games.

“We know we’re in a battle to be as high in the table as possible. You sometimes see results that go the way we don’t expect.

“We know we’re in a fight and we need to pick up every point we can.”