Edinson Cavani set up Fred’s equaliser before scoring with a diving header as Manchester United beat Tottenham 3-1 on Sunday, strengthening their grip on second place in the Premier League and dealing a further blow to former manager Jose Mourinho’s Champions League qualification hopes.

In other games on Sunday, Newcastle United won 2-1 at Burnley and West Ham beat Leicester 3-2. 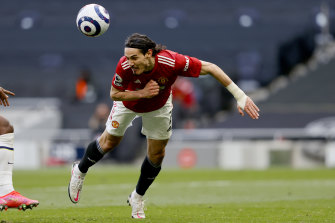 Cavani’s euphoria at scoring for United was clear as he roared in celebration at the empty north London stadium after what would have been an opener was ruled out for Son Heung-min falling after being caught by Scott McTominay in the buildup.

Even more irritating for United was Son then beating Dean Henderson at the goalkeeper’s near-post to put Tottenham in front in the 40th minute.

But United’s comeback began in the 57th when Fred teed up Cavani for a shot that was parried by Hugo Lloris and the Brazilian followed up with his first Premier League goal since 2018.

Having denied Bruno Fernandes, Lloris was beaten again in the 79th when the Portugal midfielder’s nutmeg helped to set up Mason Greenwood for a cross that Cavani got on the end of with a header. 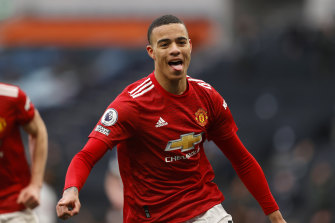 And Greenwood put further gloss on the win in the sixth minute of stoppage time by scoring after Paul Pogba and Cavani combined to set up the English forward for a shot that Lloris got a touch to but couldn’t keep out.

While United is locking down second place, Tottenham has fallen six points from fourth place with seven games remaining in an erratic season that saw a brief title bid disintegrate.

The Premier League trophy seems out of reach for United with Manchester City 11 points ahead, but Ole Gunnar Solskjaer is still on course to deliver the team’s highest finish since being runners-up three years ago under Mourinho.

Jesse Lingard took his goal tally to eight in nine appearances since joining West Ham on loan from Manchester United by netting twice in a 3-2 victory over Leicester.

The win allowed West Ham to dislodge Chelsea and move back into fourth place in the Premier League in pursuit of Champions League qualification for the first time.

David Moyes’ side held off a late Leicester fightback and is now just a point behind third-place Leicester.

Leicester’s cause was not helped by a breach of COVID-19 rules by some of their players.

James Maddison, Hamza Choudhury and Ayoze Perez were all left out for what could potentially end up being a pivotal clash for the European aspirations of both teams. 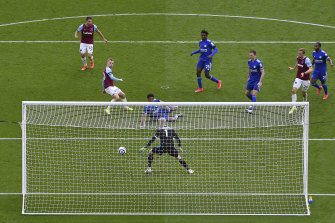 A moment of quality from the in-form Lingard, in front of England boss Gareth Southgate, put West Ham ahead in the 29th minute.

Right back Vladimir Coufal cut the ball back to Lingard, who sent a precise volley past goalkeeper Kasper Schmeichel from the edge of the area.

Lingard struck again in the 44th when the Leicester defence was caught out by a long ball from Issa Diop. Jarrod Bowen stayed just onside as he raced toward goal and, as Schmeichel came out, the winger squared for Lingard to tap into an empty net.

The hosts were 3-0 up just three minutes into the second half after Arthur Masuaku robbed Kelechi Iheanacho and fed Lingard down the left. Lingard cut the ball back to Tomas Soucek, who played it on to Bowen for a simple finish.

But West Ham have found 3-0 leads hard to hold onto in recent matches, having been pegged back to 3-3 by Arsenal and clung on for a 3-2 win at Wolves on Monday.

The jitters threatened to set in again when Masuaku lost possession and Iheanacho lashed home.

Ricardo Pereira should have halved the remaining deficit when he was played in by Youri Tielemans but Lukasz Fabianski thwarted the full back.

Iheanacho did grab a second when he prodded in Marc Albrighton’s cross at the start of six minutes of stoppage time.

Wesley Fofana then headed a last-gasp chance wide as West Ham held on to inflict only a second away defeat of the season on the Foxes.

At Burnley, Allan Saint-Maximin came off the bench to inspire Newcastle to a 2-1 victory that lifted the team six points clear of the relegation zone. 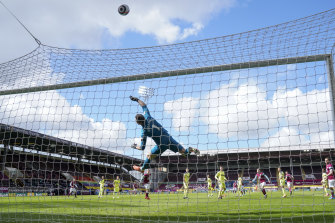 Newcastle’s goalkeeper Martin Dubravka tips a Burnley shot on goal over the net at Turf Moor on Sunday.Credit:AP

It was Wilson’s first appearance since February 6, with the Magpies winless during the time their top scorer has been out with a hamstring problem, but it was Saint-Maximin who would do the damage at Turf Moor.

Within two minutes of his introduction, the Frenchman, who has been limited to 18 league appearances this season through illness and injury, ran into the penalty area, drawing three defenders before pulling the ball back for Jacob Murphy to fire in an equaliser.

Bailey Peacock-Farrell, deputising for the injured Nick Pope in the Burnley goal, had enjoyed a relatively quiet afternoon to that point, but five minutes later he was picking the ball out of the net again as Saint-Maximin raced from the halfway line before finding the bottom corner.

It was a remarkable turnaround after Newcastle had been second best for almost a full hour, and one that could just transform their season.

Victory ended a seven-game winless run for Bruce’s side and the second-half display offered a road map out of trouble.

But Sean Dyche must rue the three points that got away as his side, which has won just one of its last eight, let a winning position slip for a second week running.