Paul Pogba “is on a six-week trial” at Manchester United, according to Paul Merson. The Red Devils midfielder has barely featured in the 2019/20 campaign due to injury but is available for selection when the Premier League restarts.

Pogba’s last competitive appearance came in the Boxing Day thrashing of Newcastle United but he has featured in the club’s practice matches ahead of next Friday’s restart clash against Tottenham Hotspur.

He is also about to enter the final year of his contract, although a one-year option is expected to be triggered to protect his transfer value.

Real Madrid and Juventus are interested in Pogba, and former Arsenal star Merson believes Solskjaer and co will use the remaining fixtures to gauge his viability alongside Fernandes. 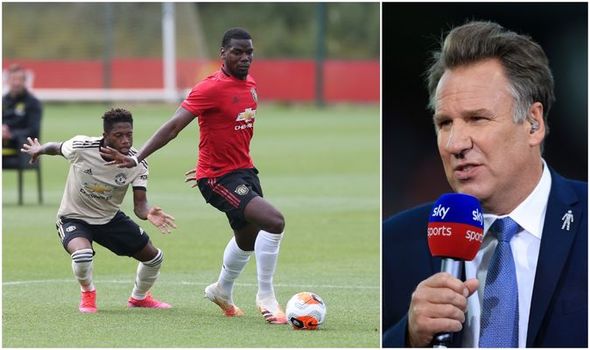 He told the Daily Star: “Paul Pogba is on a six-week trial at Manchester United and if it doesn’t work out he will be gone.

“The spotlight is going to be on him when he comes back because United were playing very well without him before the break.

“How he does over the next few weeks will decide whether they keep him, and how much he is really worth to any potential buyers.

“I think it’s a massive few weeks for him. If it doesn’t work out I think he will take the blame.

“He has a chance now to play with Bruno Fernandes and see how it works. I think they should work well together.

“It’s all about being on the same wavelength. He will have confidence in Fernandes. Before, he was playing Hollywood passes because he didn’t trust his team-mates.

“I think we’ll see a better Pogba because he will keep it simple now. If he looks up and sees Fernandes open he will play it to him.

“Those two should hit it off in my opinion. But let’s be honest, if it doesn’t work for Pogba now, it’s just not going to, is it?”