A hat-trick from Bruno Fernandes and a stunning display from Paul Pogba lifted Manchester United to a 5-1 thrashing of rivals Leeds as Ole Gunnar Solskjaer’s side opened their Premier League season in style at Old Trafford.

Fernandes gave United a first-half lead when he fired a shot in between Leeds goalkeeper Illan Meslier’s legs following a first-time pass from Pogba, his first of four assists.

Luke Ayling scored a stunning goal to equalise for the visitors after half-time, but it only served to spark the hosts into life as they hit three goals in the next 10 minutes. Mason Greenwood smashed a shot in off the post from the angle before Fernandes thrashed in his second and third goals in front of a frenzied home crowd.

And Fred scored the fifth on a promising day for Manchester United, on a day which saw Jadon Sancho make his debut from the bench and France international Raphael Varane introduced to the capacity crowd at Old Trafford as his signing from Real Madrid was confirmed before kick-off.

Here are five things we learned

It was not a surprise to see Manchester United’s first goal of the season scored by Bruno Fernandes. But for the midfielder to then go on and score two more goals and complete his first hat-trick for the club, on a day that saw Old Trafford burst into life in an outpouring of noise and belief, was further emphasis of how integral the Portugal international has become.

The unveiling of Raphael Varane shortly before kick-off led to an electric atmosphere at Old Trafford, as a capacity crowd returned to the stadium for the first time since March 2020. The France international brings quality and experience and will slot straight into United’s back four alongside Harry Maguire, while it was clear for all to see that Jadon Sancho will bring a significant upgrade to United’s right wing in place of Daniel James once he is ready to start matches.

Those two major signings led to a heightened sense of optimism around Old Trafford ahead of the new season, and a winning start against rivals Leeds only serves to increase that to another level. But in order to do that, United had to first banish the memories of last season’s inconsistent home form. The club have also lost home matches in August in each of the two previous seasons.

Up stepped Fernandes, who despite those new arrivals remains at the heart of all of United’s promising play and scored a stunning opening day hat-trick. The Portugal international picked up from where he left off last season and continued his outstanding form. No other Premier League player has contributed more goals or assists than Fernandes since his arrival in England and it was not a surprise to see him seize the occasion.

United will be expected to challenge Manchester City, Chelsea and Liverpool for the title this season. This was a statement win, and one that will have the rest of the league sit up and take notice.

Ahead of their opening match of the season, the message from Leeds manager Marcelo Bielsa would have been more of the same following their impressive debut campaign last year.

Perhaps his players took that a little too literally as they were thrashed 5-1 by their rivals, as they extended their run without a league win at Old Trafford to 17 games.

Last season’s 6-2 defeat to Manchester United was a low point for Leeds last season, if this opening thrashing is their lowest moment again, then Leeds will still be confident of having had a good campaign. 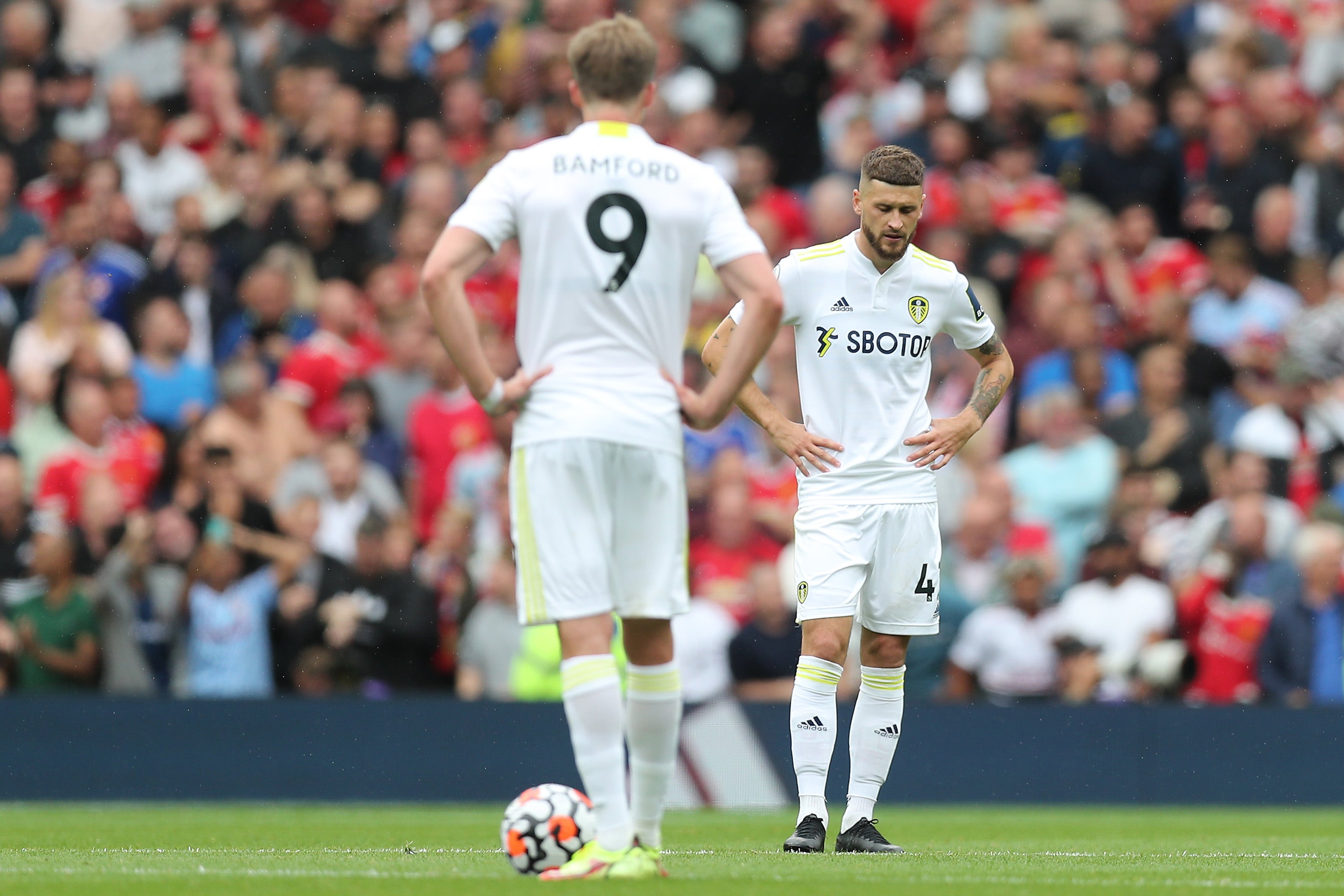 There were still plenty of signs that Leeds will sparkle yet again. Much of their attacking play in the first half was impressive, with some lovely combinations between Rodrigo and Raphinha and a couple of clever runs from Jack Harrison and Mateusz Klich.

Patrick Bamford was isolated, however, and the spaces in defence and midfield allowed Solskjaer’s side several clear openings. The same could be said following that 6-2 defeat last December. Following that defeat, Leeds simply picked themselves, stayed true to themselves and went again and the message will remain the same ahead of next week’s home opener against Everton.

With Edinson Cavani unavailable due to his extended summer break, Manchester United’s Premier League opener presented Mason Greenwood with an early opportunity to state his claim as Solskjaer’s first-choice striker for the first few weeks of the season.

His second half goal was the highlight but the 19-year-old impressed in an all-round number nine’s performance, which is where Greenwood is likely to get the majority of his minutes this season due to the arrival of Sancho, who will occupy their right wing.

Greenwood’s finish was typically unerring but his link-up play and dribbling also caught the eye, with the England international looking confident when dropping deep to receive passes and bringing other players into play. There was an excellent take and pass to Dan James, which led to the winger having a shot at goal.

With Cavani unlikely to return ahead of next week’s trip to Southampton, it looks like he has done enough to keep the spot ahead of Anthony Martial – and his performance bodes well for the rest of the season too.

Paul Pogba in the mood with four assists

With Paul Pogba now into his final season on his contract at Old Trafford, the midfielder produced one of his best performances since joining the club five years ago as he made four assists in the thrashing of Leeds.

Pogba could have been pulling on a PSG jersey later today were it not for Lionel Messi’s sudden departure from Barcelona – as the French club were reportedly set on signing the 28-year-old prior to Messi becoming available. 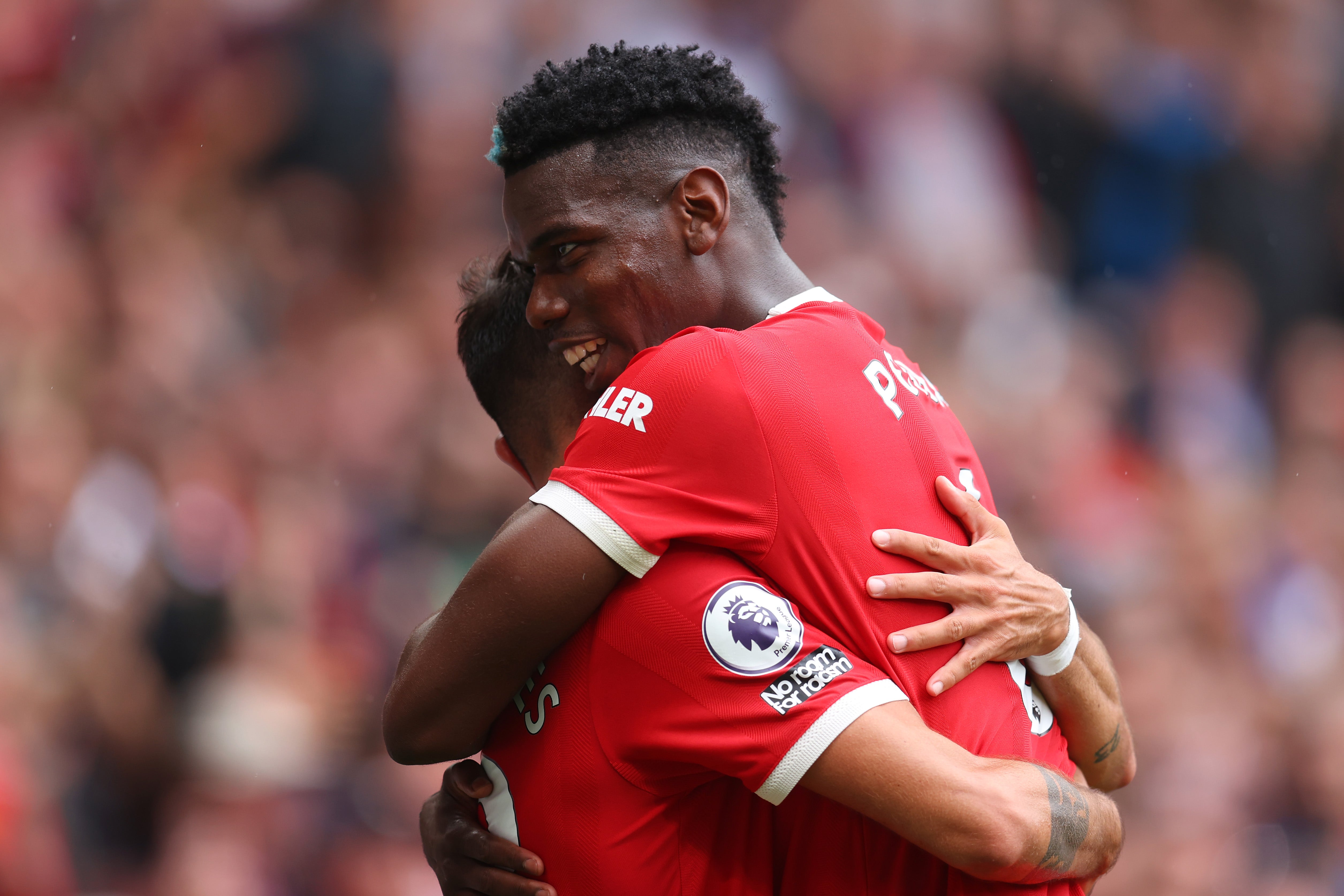 Pogba was tremendous against Leeds as he matched the high level of performances we saw from him at the Euros earlier this summer, with the France international continuing to show a promising partnership with Fernandes when drifting in from the left and combining in central areas.

But, as it often is with Pogba, it was his passing that almost stole the show in United’s statement win. His pass to Mason Greenwood for United’s second was sublime and in making four assists, he has already tallied more in one match than he did in the entirety of last season.

If this is to be Pogba’s last season at the club, he certainly looks like he means business.

For all of their promising play in an attacking sense, Leeds badly missed Kalvin Phillips in the heart of their midfield and Manchester United ruthlessly exploited the spaces left by the absence of the England midfielder.

Phillips was outstanding in man-marking Fernandes in the 0-0 stalemate between the sides last season, but without him the Portugal international had the running of the central areas.

The opening goal came from such a position, with Scott McTominay finding Pogba, who flicked the ball onto Fernandes who had made the third-man run off the back of Robin Koch.

Leeds had been warned earlier in the game following a couple of driving runs from McTominay – and the gaps were not plugged in the second half as Solskjaer’s side racked up the score.