Manchester United eased their way through to the last 16 of the Europa League after an eventful, but ultimately goalless, second leg against Real Sociedad.

Dan James gifted the Spanish side an early route back into the tie with a clumsy foul in the box but Mikel Oyarzabal sent a dreadful penalty well off-target. United went close through a fierce Anthony Martial shot, saved low down, before Bruno Fernandes clipped an effort off the crossbar midway through the half.

Both teams made triple subs at the break and La Real settled the quicker after those changes, with Modibo Sagnan bouncing a header off the crossbar.

Another header almost provided the opening goal at the other end, as Axel Tuanzebe powered in what would have been his first for the club, but Victor Lindelof was adjudged to have committed a foul as the delivery came over and the game finished 0-0, United progressing 4-0 on aggregate.

Here are the player ratings from the game at Old Trafford.

Dean Henderson – 6. Safe with his handling and footwork. Didn’t face a shot on target.

Aaron Wan-Bissaka – 6. Wasted a few good crossing positions. One of three subbed at the break.

Eric Bailly – 7. Beat Isak for pace and strength. Solid throughout and cool on the ball.

Victor Lindelof – 6. Caught out once or twice but no great disasters, having switched from right to left in the centre for this game.

Alex Telles – 6. Industrious and a good outlet on the run, but not too much finesse about his game in possession.

Fred – 7. His usual combative self in the middle, with some very good surges into the box. Subbed at the break.

Nemanja Matic – 6. Strolled through the encounter with enough clever moments to frustrate La Real on the break.

Mason Greenwood – 7. Made himself room for a couple of shots and dribbles but lacked accuracy in the finish.

Bruno Fernandes – 7. Almost scored a very good chip and produced some good deliveries into the box in his half a game on the pitch.

Dan James – 5. Clumsy to give away the penalty and should have scored with a header. Forced off injured in a disappointing outing.

Anthony Martial – 7. Wasn’t given much space to work in but fashioned himself a couple of decent shots.

Brandon Williams – 5. On at right-back at the break and lucky not to be sent-off within five minutes for a couple of fouls. Looked very rusty.

Axel Tuanzebe – 7. Played central midfield after coming on. Neat on the ball and powered in a header which was ruled out.

Amad – 6. Half an hour on his Old Trafford debut. 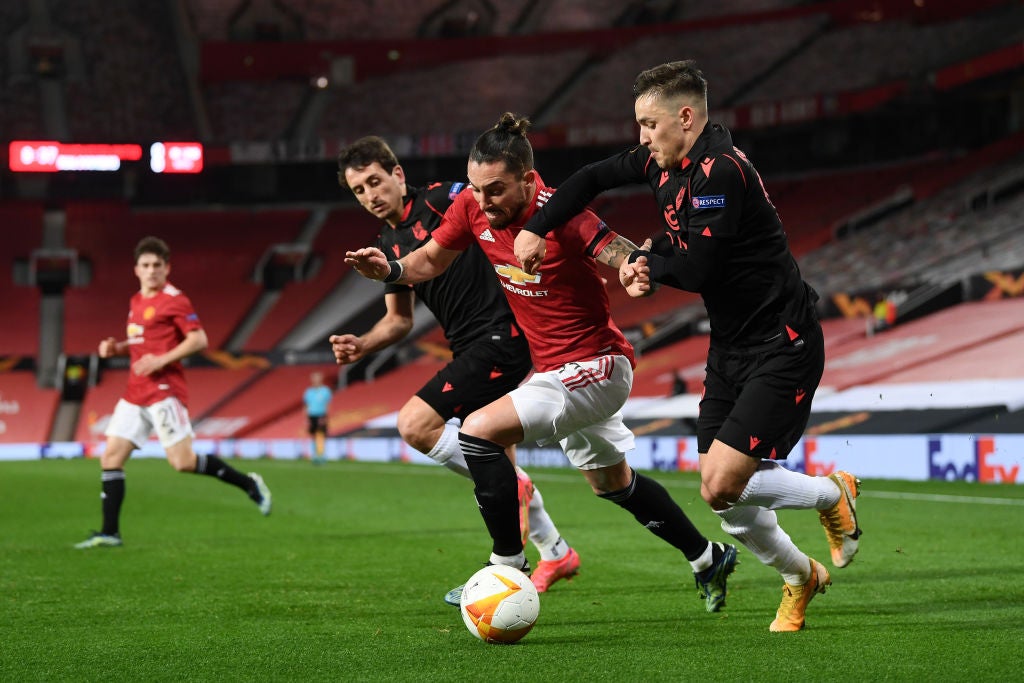 Alex Remiro – 7. A couple of fine saves. Continued to enhance his reputation over the two legs.

Igor Zubeldia – 6. Turned inside out a few times by Greenwood and Martial.

Modibo Sagnan – 8. Brought a more reliable presence to the back line with his recovery work and played out from deep well.

Aihen Munoz – 6. Something of a bystander in a reserved, defence-minded role.

Ander Guevara – 7. Moved the ball quicker than United could cope with at times. Powerful running from deep to support the attack.

Martin Zubimendi – 6. Hit-and-miss in the centre of the park.

Mikel Merino – 6. Controlling from the centre, though bypassed by United’s more direct attacks.

Adnan Januzaj – 5. A determined showing, but not one with much quality or end product.

Alexander Isak – 6. Kept quiet most of the night by Bailly, though kept making his runs off the ball.

Mikel Oyarzabal – 6. Very poor missed penalty which could have made the second leg interesting.

Portu – 6. Little impact in the second half.

Jon Bautista – 5. Nothing fell his way after the break.