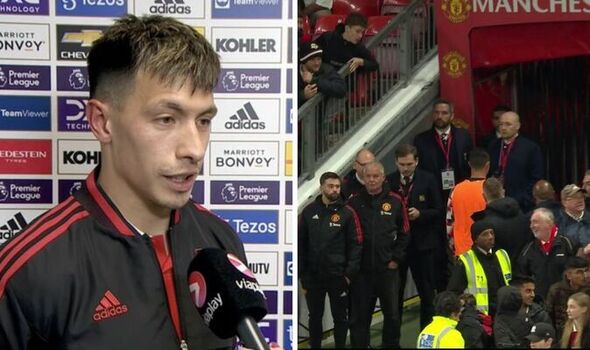 Lisandro Martinez had no idea Cristiano Ronaldo stormed down the tunnel early but regardless, he did not want the incident to take the shine off Manchester United’s 2-0 victory over Tottenham at Old Trafford. Erik ten Hag’s side were excellent from start to finish as they dominated proceedings and if it hadn’t been for Hugo Lloris, the visitors would have been on the receiving end of a one-sided thrashing.

The World Cup-winning captain with France made a string of world-class saves, two of which were to deny Marcus Rashford from getting his name on the scoresheet in the second half as United went for the throat.

The Red Devils took the lead just after half-time when Fred’s deflected effort squeezed into the bottom corner of Lloris’ goal.

It was then 2-0 when Bruno Fernandes, who turned in a standout display, curled home expertly from just inside the box.

Then, rather annoyingly for United, a great night’s work was somewhat overshadowed by Ronaldo’s antics as he stormed down the tunnel early – refusing to celebrate the result with his team-mates and fans after being kept on the bench by Ten Hag.

The United head coach vowed to deal with the incident on Thursday, while impressive centre-back Martinez did not seem bothered by Ronaldo’s surly tantrum as he focused on fine team performance and victory.

He told Viaplay: “I didn’t see anything. I don’t know. I only enjoy with the people, we won, and that’s important.”

That was the motto for the majority of United’s players, who were keen to soak in the electric atmosphere after such a spirited collective effort that showcased their top-four credentials.

If United are able to play like that regularly at home, Old Trafford has the potential to become a fortress again.

Tottenham, however, have a lot to ponder after another toothless display that suggests they are lacking a Plan B under Antonio Conte when it comes to the crunch matches against the Big Six.

Meanwhile, Match of the Day host Gary Lineker could not believe Ronaldo’s decision to boycott the end of the match, issuing a damning assessment of his behaviour: “I’m sorry, that is unacceptable – it is so poor.”

Micah Richards was in agreement, adding: “For one of the greats of the game to do that when your team are winning, making it about him, is disappointing.”

Ronaldo also made it clear he was furious at being substituted on Sunday in United’s 0-0 draw with Newcastle at Old Trafford.

The Portuguese veteran should have had a penalty before he was replaced by Rashford in the second half – a call that did not go down well.

He made his frustrations known as he walked off the pitch, shaking his head and talking to himself in fury.

It’s now turning into a season to forget for the five-time Ballon d’Or winner, who recently struck his 700th club goal in the 2-1 win at Everton.

Ronaldo has started just three of United’s 10 Premier League matches – playing the majority of his football in the Europa League after attempting to pursue a summer transfer.

James Rodriguez to return from injury for Everton against Manchester United