A swathe of supporters continue to hire planes to give Frank de Boer tactical pointers, but a Netherlands fuelled by Memphis Depay and Gini Wijnaldum have flown through Group C unblemished and hold status as the tournament’s top scorers.

There has been criticism over the manager’s betrayal of Dutch football’s religious 4-3-3 system and question marks over some of his selection choices, but his charges have picked up maximum points, have created and converted chances almost at will while only being breached twice.

North Macedonia were the latest to be dispatched by the Holland machine in the legendary Goran Pandev’s final international game, with all three goals at the Johan Cruijff Arena containing the common dominator of Depay.

Their main man, who played a direct role in 58 per cent of Netherlands’ successful attempts in qualifying, has carried over his decisive form to the tournament proper.

Barcelona’s new signing has netted nine times in his last 10 appearances for the national team and provided the platform for Monday night’s comfortable victory. 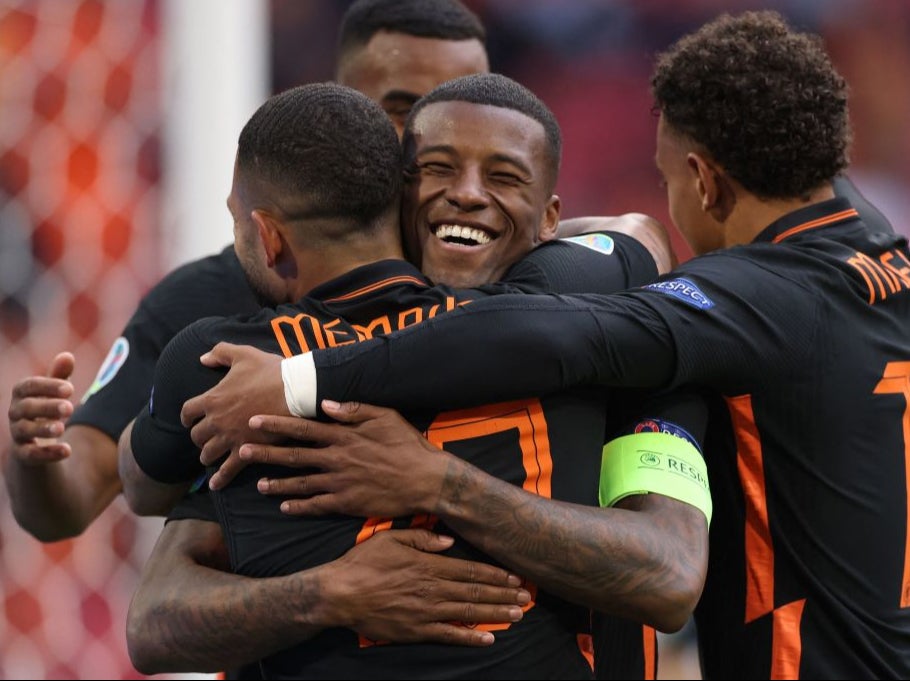 The player La Liga’s giants missed out on, Wijnaldum, recorded a double to move to 25 international goals, motoring past Marco van Basten’s tally.

What was an enjoyable encounter for the Netherlands, did not shape up as such in the opening minutes.

On 10 minutes, North Macedonia had a goal disallowed for a very tight offside call when Aleksandar Trajkovski sped into space and onto a lovely ball from Pandev before slotting past Maarten Stekelenberg.

The debutants continued to be enterprising and the pair combined to brilliant effect again. Pandev flicked a pass towards Trajkovski, who thundered in a screamer from distance that smashed off the upright.

Netherlands were fortunate to not be behind, before then blitzing their way through to another win.

Depay swept home after a stunning counter, with VAR allowing the goal to stand after reviewing a strong Daley Blind challenge on Pandev in the build-up.

The dynamic Denzel Dumfries twice went close after the opener with De Boer’s men turning up the ante after the break.

Wijnaldum, who made a super run from deep, tapped home after being supplied by Depay on the left.

That goal saw him match Van Basten’s haul, and just seven minutes later, he surpassed it.

Donyell Malen, who assisted the opener, was also involved with a cute pass to Netherlands’ No 10 in the build-up.

There was a flood of emotion and embraces when Pandev was substituted in what is expected to be the farewell to a 20-year international career and North Macedonia almost had a silver lining late on.

Darko Churlinov paced towards a neat Enis Bardhi throughball from deep and fired low past Stekelenburg, only to have his effort chalked off for offside.

Boban Nikolov then struck wide from a tight angle but there was to be no joy on the scoreboard to crown a spirited performance.