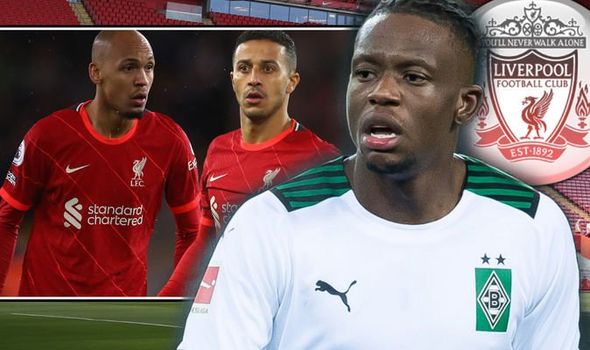 Liverpool’s lack of fit senior centre-halves wrecked their chances of defending the Premier League title last season. They patched themselves up as best they could, overcame a rocky period, and salvaged a third-placed finish. It was a respectable finish in the context and they addressed the problem in the summer with the signing of Ibrahima Konate. But what might have happened had Liverpool signed a direct replacement for Dejan Lovren when he left 12 months earlier?

Central defence is now no longer a problem with Virgil van Dijk, Joel Matip, Joe Gomez and Konate all fine options. Instead, this season, it has been a different area of the pitch that has been their downfall – the midfield.

Perhaps the Reds should consider fixing this issue now rather than in the summer. Their lack of midfield control will cost them the Premier League title but they can still win the Champions League, and maybe the Carabao Cup or FA Cup too. Not if their midfield problems persist, however.

Fortunately, there is a realistic cost-effective solution available to them in the January transfer window – one they are well aware of.

As Sunday’s draw with Chelsea showed, Liverpool no longer control matches as effectively as they did two seasons ago when they won the league. That is the key difference between them and leaders Manchester City.

MUST READ: Three players Liverpool need to step up without Salah, Mane and Keita

When Fabinho and Thiago Alcantara start together, Liverpool have won 15 games from 15 across all competitions, keeping 12 clean sheets. That runs goes back to October 2020 and the duo were key to rescuing a top-four finish last season.

But when without either of the two, Liverpool lack class and control in the middle. Thiago was absent at Stamford Bridge and it showed.

Those results, plus the draw away at Chelsea, account for 16 of the 18 points dropped by Liverpool this season. The other failure to win came in the home draw with Chelsea, when Thiago started on the bench.

Without Thiago and Fabinho together, Liverpool struggle to master the midfield. Frustratingly the pair regularly pick up niggling injuries.

When they do, their stand-ins cannot replace their qualities in breaking up play and dictating the tempo.

James Milner and Jordan Henderson toiled at Chelsea and despite their qualities are not the all-energy forces they were two years ago. Naby Keita and Alex Oxlade-Chamberlain have been inconsistent this term while Harvey Elliott and Curtis Jones have had injury-wrecked seasons and still have plenty to develop.

With Milner out of contract at the end of the season, captain Henderson having just turned 31 and Keita and Oxlade-Chamberlain entering the final 12 months of their deals this July, Liverpool need to freshen up the midfield.

They are likely to make that a priority in the summer but should perhaps fast forward the process to give themselves the greatest chance of silverware this season. Otherwise it will feel like a wasted season.

Borussia Monchengladbach’s Denis Zakaria might be the answer. Per reports, the Reds have enquired about a January deal and he is a player who would fit into their midfield thanks to his intelligence and his technical and physical abilities.

Capable of playing as a holder, a box-to-box midfielder or in a more advanced role – and even as a centre-back – the combative 6ft 3ins Zakaria is excellent in possession but also adept out of it.

He can break up opposition attacks and win his individual duels but can also progress the ball up the pitch. He’s tall and therefore a presence yet also pacier than Fabinho or Thiago.

He would be the kind of high-grade defensive-minded back-up Liverpool’s squad currently lacks, with none of Henderson, Milner, Keita or Oxlade-Chamberlain renowned for being defensively destructive players.

Zakaria should not be pigeon-holed at just that, either.

At 25, he would suit short-term and long-term purposes. He’s out of contract in six months and SportBILD have suggested Gladbach could sell for as little as £6million. He also earns £50,000 per week which mean he would not require a mammoth salary at Anfield.

At his age, for a 40-cap Switzerland international with 124 appearances in the Bundesliga and Champions League experience, £6m is a bargain price.

Liverpool would be very wise to be proactive about their midfield problems rather than reactive because Fabinho, 28, and Thiago, 30, will continue to pick up injuries and without them, the team suffers.

He could play as the holder if Fabinho is out, as the ball-winner and ball-player if Thiago is out or perhaps even as an attack-minded No 8 alongside the two when they’re both fit. He could also allow a change in formation to a 4-2-3-1 with himself and Fabinho as the two-man partnership.

Zakaria could be the one to ensure their near-inevitable periods of absence don’t hurt Liverpool as much in the second half of the season as they have in the first. It would be the ideal leaving present from departing sporting director Michael Edwards.