From a car-crashing snowman to a goal-smashing showman! Michail Antonio is dancing his way into West Ham hearts after setting Premier League record in Leicester triumph

From the missing person faux-pas and the snowman in the super car to the club’s top scorer of the Premier League era — it has been quite a ride for Michail Antonio at West Ham.

He arrived to little fanfare from Nottingham Forest six years ago, ushered through the doors at Upton Park with Nikica Jelavic, Alex Song and Victor Moses on a busy deadline day.

And he did not make an instant impression. The club’s co-chairman David Gold thought he was doing a good deed when he retweeted a social media post asking him to help find a missing person, last seen in Manchester. 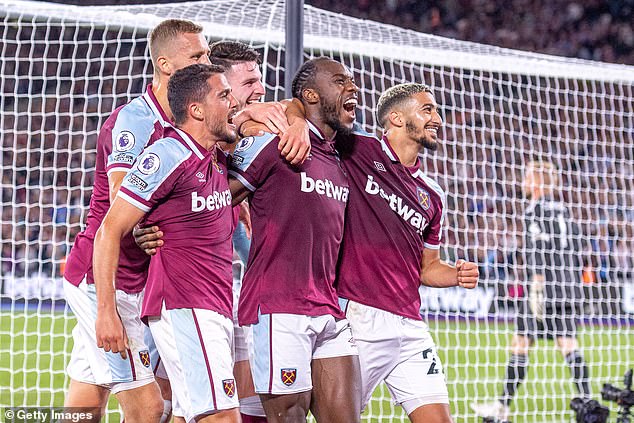 Unfortunately, the accompanying photograph was of Antonio — who made only one appearance in his first three months at the club, several weeks earlier, as a substitute at Manchester City.

All of which was long forgotten on Monday night as he moved clear of Paolo Di Canio on to 49 Premier League goals for the Hammers with two late strikes in a pulsating victory over Leicester.

He is well adrift of Vic Watson and Geoff Hurst, the club’s greatest ever goalscorers, but as his name rang out around the London Stadium it seemed as if the long-suffering fans had finally found the hero they were looking for — and he had been there all along. 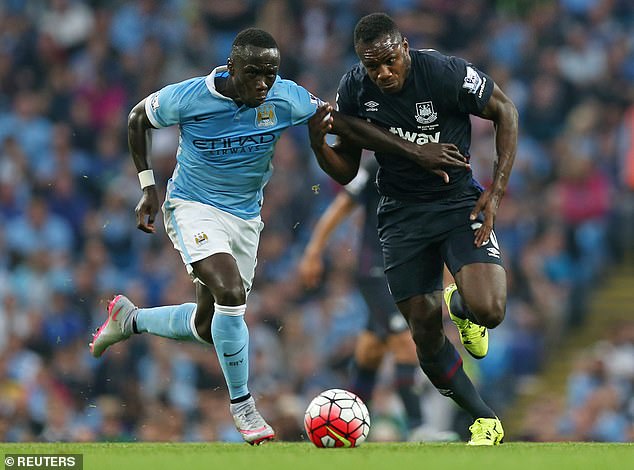 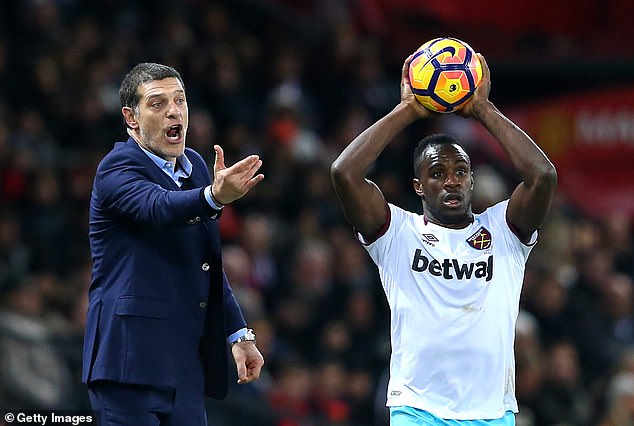 Antonio celebrated in typically exuberant fashion, dancing with a cardboard cut-out of himself after his first goal and then hoisting it above his head, in honour of Jennifer Grey’s character Baby in the 1987 hit film Dirty Dancing.

Then he muddled up his romantic dance movies and talked about Save the Last Dance in the heat of his post-match interview. ‘Score the goal, make history, nail the celebration, get the film name wrong in the interview,’ tweeted Antonio. ‘Baby, forgive me.’

His happy demeanour is infectious. He adores his football and plays with a smile and an attitude rooted in his humble beginnings in non-League. Still, on a Sunday, if not playing, he will be at his mum’s in south London for dinner.

Little wonder the fans feel a connection, especially when Antonio is in the form of his life, transformed from utility wide man and emergency full back into the much-feared spearhead of a team on an upward curve. 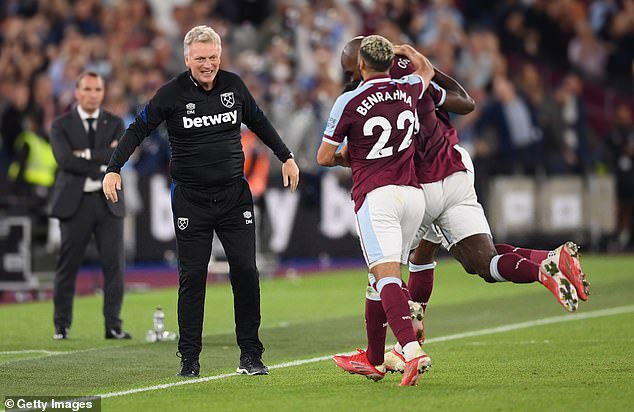 However, David Moyes’s return to the Hammers has seen Antonio completely transformed 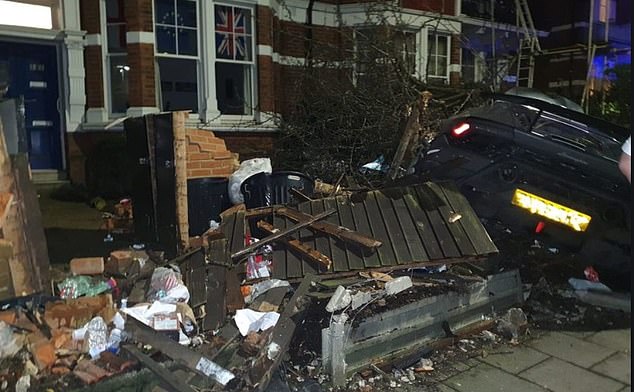 Moyes returned four days after Antonio crashed his car on Christmas, dressed as a snowman 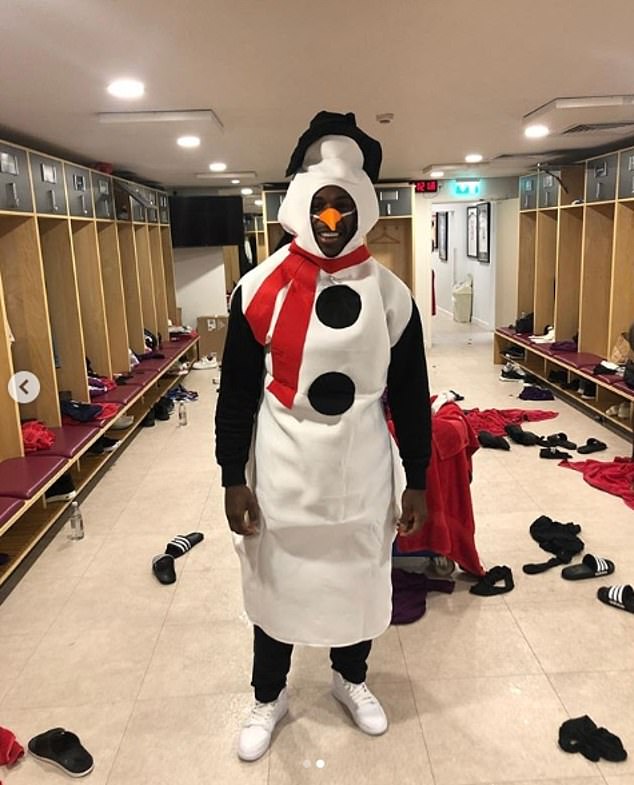 Antonio, 31, dressed as a snowman before he crashed his car into a front garden in Balham

West Ham have squandered millions on strikers, from the financial disasters Sebastien Haller and Felipe Anderson to the fleeting but unforgettably awful loan spells of Jonathan Calleri and Simone Zaza.

David Moyes has influenced many things for the better since his return to the club and perhaps the key one has been to impose good sense upon the recruitment policy.

Gone, for the time being, are the vanity signings of co-owners Gold and David Sullivan, always prone to one more roll of the dice on a striker served up by a friendly agent. Replaced by a simple plan to pursue players the manager values and wants in his squad. Imagine that.

Moyes returned to West Ham in December 2019, just four days after Antonio had crashed his £210,000 Lamborghini into a bin-shed in the front yard of a family home in south London, on Christmas Day, having lost control of the car while dressed as a snowman. 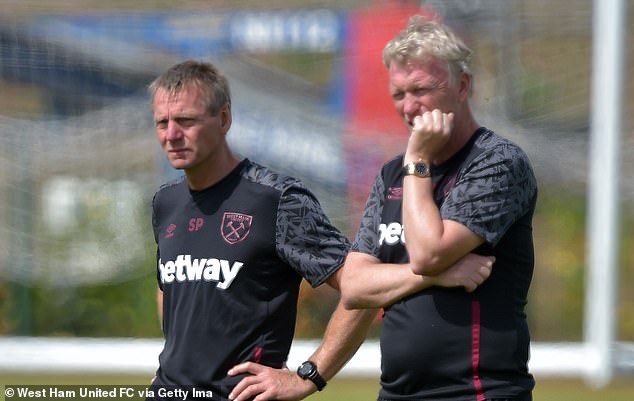 West Ham fans have long craved a hero to adore from the terraces, after big-money flops such as Felipe Anderson (left) and Sebastian Haller (right)

The pair have been good for each other. Twenty-two of Antonio’s Premier League goals have come in 43 appearances since.

This season, he has taken the No 9 shirt from Said Benrahma. It was not a decision taken lightly. He was fond of his No 30, but decided to embrace his new role as a centre forward and the responsibilities that come with it. He has opened with three goals in two games. ‘Last year, I was disappointed with 10 goals,’ said Antonio. ‘I wanted 15. Three in two now. Who knows, I could even get 20.’

Moyes and his coaching staff, including Stuart Pearce, who signed Antonio at Forest, can take credit. They have identified his ability to play up front and nurtured him but those who know the player will tell you the goal knack was there in his teenage days as a winger at Tooting and Mitcham. It was evident, too, at Sheffield Wednesday and Forest. 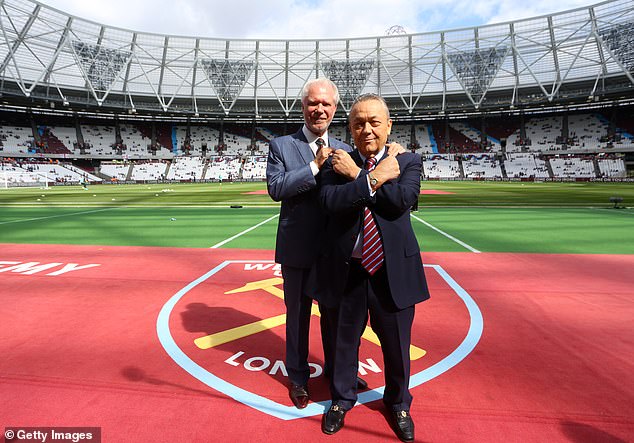 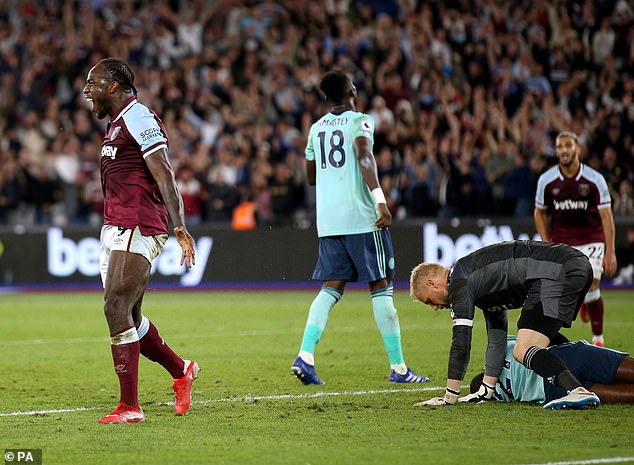 Now, West Ham’s most unlikely hero has made history as their Premier League top scorer

He has devoted time to refining his link-up play and finishing, but, as a centre forward, he is simply in front of goal more often. He is strong and quick, has the desire to reach crosses and excels in the air in an age when it often seems more important for central defenders to look good on the ball than to head it.

His physical attributes remain, and he has matured into the role and has a better understanding of his body. At the age of 31 and as a father of four, he has adjusted his lifestyle and diet, cutting down on the intake of red meat, focused on a better sleep pattern and noticed fewer of the muscle problems that used to disrupt his consistency.

‘I’m no longer the young pup,’ said Antonio. ‘I kept believing that I was and there were things I could have been better with. I used to eat what I wanted. Now I’ve changed my diet and routine. And I’ve noticed I’ve had fewer niggles and not felt my hamstrings at all.’

At West Ham, having hailed their new hero, they will hope that continues to be the case.