Mick Rathbone left Everton in 2010 after David Moyes saw he had become weary and worn down… now the 63-year-old is loving life at Salford City, can rap along to Eminem and has no desire to retire as he releases the sequel to his much-loved first book

It’s the time of year for talk of Father Christmas but today, on a beautiful morning in Salford, thoughts of Peter Pan are more appropriate during a poignant conversation with Mick Rathbone.

Rathbone is one of those people in football who is known and respected far and wide through his nickname. There is nothing ‘Baz’ has not seen during a career that has spanned almost half-a-century, as a player, a manager and physiotherapist and seen him represent all manner of clubs.

We meet at the Peninsula Stadium, Salford City’s home, to discuss Rathbone’s recently published memoirs, The Smell of Football 2. The first edition, which came out in 2011, was shortlisted for sports book of the year but the decade that followed lent itself to so much new material. 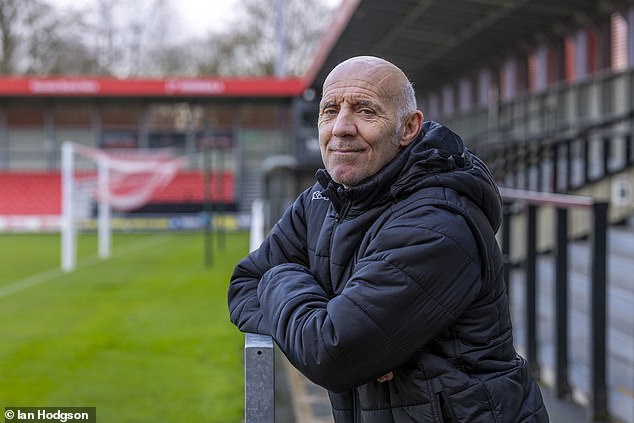 He is 63 now and, in all likelihood, this will be his final job but he keeps being drawn back. The title of the tome is the giveaway: it’s the smell of football, from the freshly mown pitch in front of us to the liniment oil and the expensive aftershave in the dressing room. It all keeps drawing him in.

‘You want to retire, you want that short-term benefit of being sat at home with your feet up,’ Rathbone says. ‘But, deep down, you know this is a drug. It is so much a part of your life. There is a fear, really, of walking away from it all.

‘You know, there is still that amazing moment when you are doing some running with the lads, trying to get them back. You join in the session, the long passing, the little one-two drills, then a weights circuit. It’s bloody magic, you know? It really is.’

And he means it. Rathbone is approaching pensionable age but he does not want to grow up, in the best possible sense. He enjoyed his time as a player at Birmingham, with Trevor Francis, and became a stalwart at Blackburn but it is the second phase of his career that has been so colourful.

From working with David Moyes at Everton, onto spells with England’s Under-17s – where he was part of a European Championship winning set up – Wigan, Blackpool, Nottingham Forest, West Ham back to Everton and now into Salford, Rathbone’s zest for life is unmistakable and the enthusiasm with which he approaches each new day is infectious. 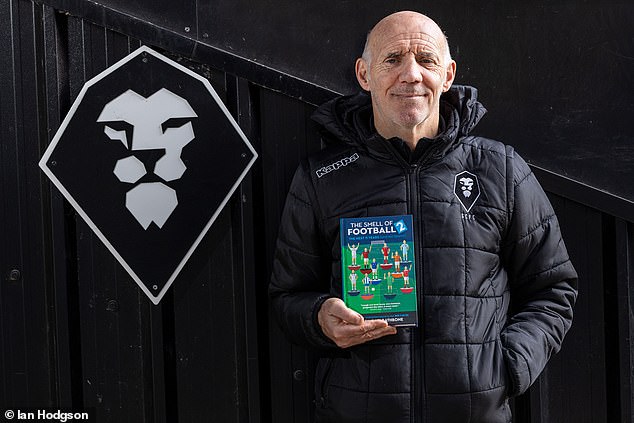 Rathbone has just released The Smell of Football 2, the sequel to his successful first book

It would be possible to talk for hours about stories from all those clubs but the one thing that seems to leap out from every word is the desire to stay young at heart, to win the battle with Father Time and stay relevant with the new generation.

‘Do they think I am too old?’ he asks. ‘Well, look at it another way. They are keeping me young. When it is my first day at the club, I do my Eminem rap…’

You do your what?

‘Oh yeah,’ Rathbone is smiling now. ‘These lads look at me and must think: “this fella is going to do a Waltz or some Frank Sinatra!” It’s that sickening noise of spoon on glass – tink, tink, tink, tink! You look around and see all the players are terrified. Nobody wants to sing, do they? 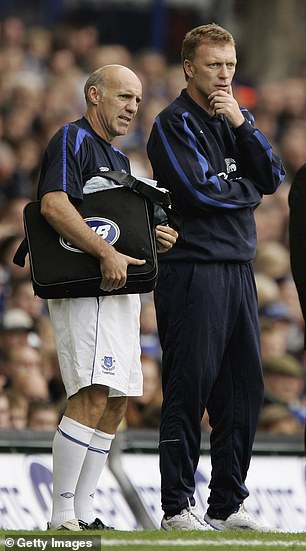 David Moyes made the decision to release Rathbone from Everton in 2010, having noted his friend had become weary and worn down

‘I always say: “Lads, I don’t know any songs. Shout anything out and I will try my best… wait… what was that at the back? The final rap scene from Eight Mile? Ok! Come on!” I’ve had five standing ovations for it! It is that reaching down and getting into the “youngness”, if you will.

‘I joined a local gym in Blackburn. I’ve always been aware of getting old. Anyway, this day, I go in and I guess there was some initiative in the local community, as there were two nurses at the desk. I said to them: “Good morning!” They replied: “Morning. Are you here for heart attack or angina?”

‘I was like: “Jesus Christ! I can do 10k in 37-and-a-half minutes on the treadmill!” I was just about to join Nottingham Forest – the day I drove in, they asked me if I was coming to fix the showers! That’s the theme of the book.

‘I’m not old – I’m bloody wise and I am bloody experienced! There has been a shift in me. I’m no longer the relic, the wrinkly, bald-headed old guy. I’m now a wise old sage… I’m probably the best version of myself. I know how to say “keep calm and carry on”.’

It says much for his outlook on life and his approach to the profession that there is not a hint of bitterness or cynicism. Football is an easy industry for those traits to emerge, particularly if you have been in it so long, and Rathbone could easily have been scarred from leaving Everton in May 2010.

David Moyes made the decision to release Rathbone, having noted that his long-time friend had become weary and worn down. The description of this episode in the opening chapter is gripping but it says much for the relationship the men have that there was never any chance of a falling out. 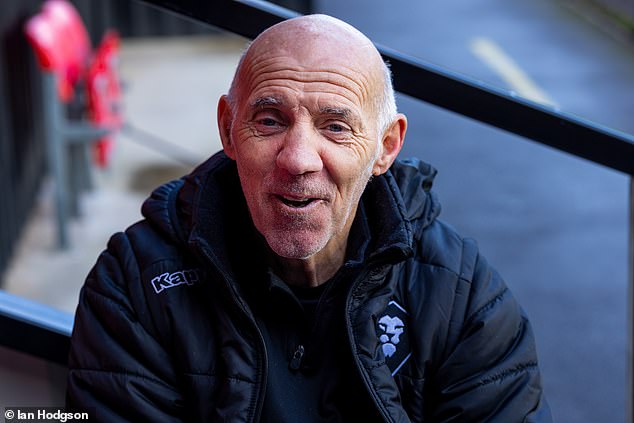 ‘I’m David’s biggest fan,’ says Rathbone of Moyes, who is once again showing himself to be a Manager of the Year candidate by reviving West Ham. ‘He’s showing how good he is to everyone, which I did predict. What happened between us was an amicable parting of the ways.

‘He is a very-gifted football person, a top guy but he is also someone you would never be able to outwork. If you believe in the mantra, the harder you work, the more success you get, he is the personification of that. The sheer ethic to work hard and inspire is incredible.’

The outlook Moyes has is one Rathbone subscribes to himself. These may be challenging times but a lesson can be learned in the importance of remaining positive and always aiming to challenge yourself. Growing old in a sport for the young is not a sign you should ever stop pushing.