Mikel Arteta admitted Granit Xhaka “overstepped the line” after the midfielder was shown a straight red card for grabbing Ashley Westwood by the throat during Arsenal’s 1-0 loss to Burnley.

“We were on top from the beginning to the moment of the sending off,” Arteta told Sky Sports. “We threw the game away.”

Xhaka was initially shown a yellow card for the incident, but referee Graham Scott changed his decision to a red after consulting the pitchside monitor at the Emirates Stadium.

Xhaka’s petulance proved costly for Arsenal, who had appeared in the ascendency early in the second half following a poor first-half showing, with Pierre-Emerick Aubameyang’s 73rd-minute own goal eventually consigning them to their seventh Premier League defeat of the campaign.

When asked if Xhaka’s behaviour was unacceptable in his post-match press conference, Arteta said: “Absolutely.”

He added: “He’s made a mistake, clearly, that has cost us.

“We were prepared, knowing this was a game we clearly had to win, but with 10 men it makes it much more difficult. You give the opponent a chance and you end up losing on a set-piece.” 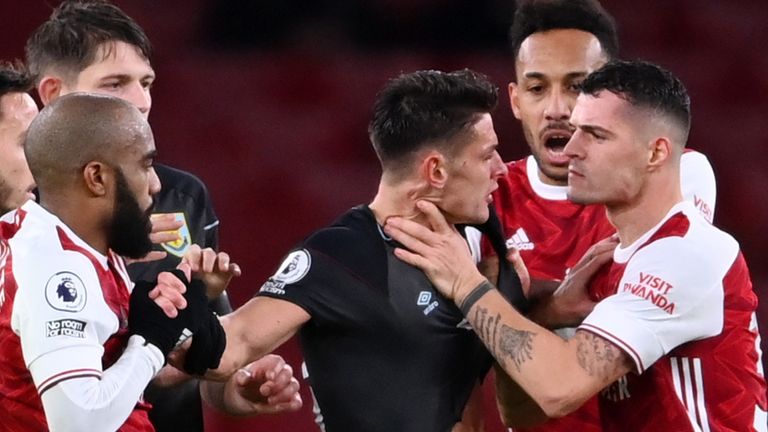 Arsenal were fortunate that Xhaka’s midfield partner Mohamed Elneny was not also sent off after he appeared to raise his hands to the face of James Tarkowski moments before Burnley’s decisive goal, and Arteta feels his players must show greater discipline.

“I think being unacceptable doing that action is because the players are in a moment where they are so willing to do more, to fight more, to show how committed they are, to be alive in the games, that on this occasion Granit has overstepped the line,” he said.

“There is another action with Mo that I haven’t seen but looks similar. We cannot make that mistake because that’s the wrong approach to what we are trying to do.” 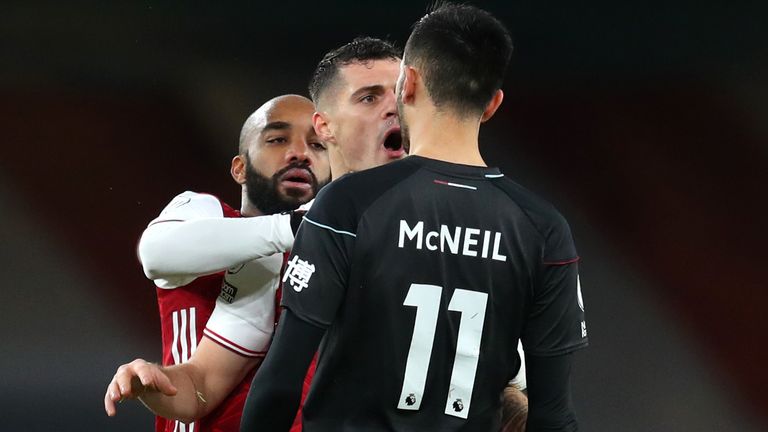 The final whistle at the Emirates Stadium was met by jeers, but Arteta insisted the 2,000 fans in attendance were behind the team during the game and thanked them for their support.

“The players are hurting but thank you so much to the fans because I think they were tremendous, behind the team with the support they were giving, knowing how difficult it’s been for all of us in this competition in recent weeks,” he said.

“I think they reacted like that because they saw how the team tried, how they went about it, how much passion they put into the game [despite] our limitations.”

“But again, we lost the game. We gave the opponent a chance and they scored.”

“Arteta has been let down by his players. These players are not good enough to play for Arsenal. They are a country-mile from where they need to be. They are not a very good team.

“Before the game l wrote down the players l would put my house on. I like Leno and Tierney. Aubayameng is a top player. That’s three. And l am going through the rest of them and l am struggling.”

Smith: Arsenal must stick by Arteta

“Arteta has made mistakes, but you will along the way. Extending David Luiz’s contract, Willian seems a strange signing and he’s on a lot of money, and someone like Cedric Soares coming into the club. They are spending a lot of the “wage-bill on players of a certain age.

“Arteta will be scratching his head on how to turn into around. But as a manager you are only as good as your players and he hasn’t got a good enough group. He has some promising lads who are doing well in the Europa League and he will be looking at that for the Southampton game and beyond. He needs to do something, he needs to change this pattern.

“I can’t remember a time when Arsenal have been in this position.

“Arteta has kept faith in Xhaka, surprisingly l think, and he has blown it. It’s just that lack of discipline letting the side down. When you are in a hole, you don’t need to keep digging. He has let his team-mates down and it has cost them the game.

“There are so many problems at the football club. Behind the scenes, there will be players pointing the finger at Arteta. He has to cope with that. You just hope that the hierarchy stick with him and give him the authority to do what he will be trying to do over the next couple of years.”