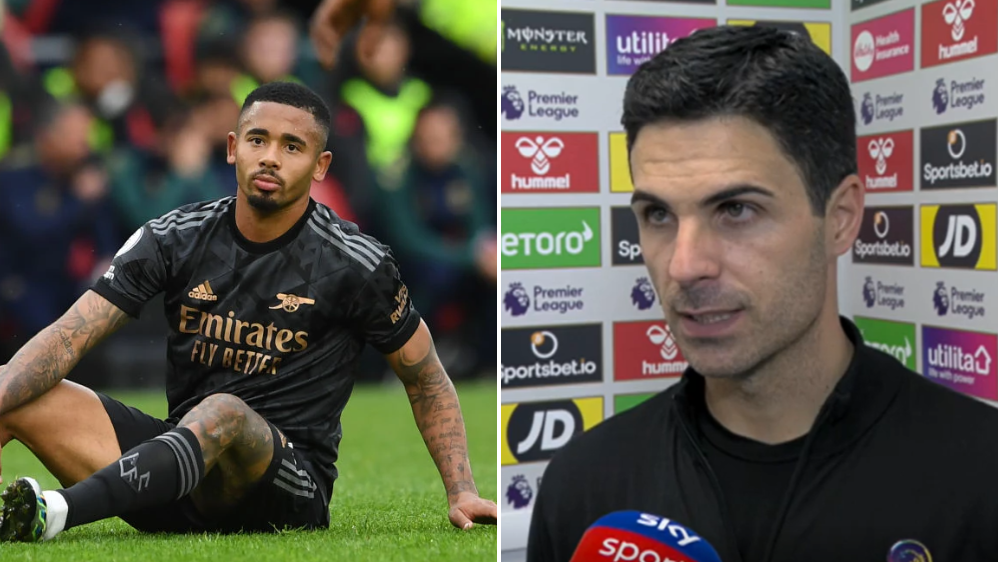 Mikel Arteta has defended Gabriel Jesus after the Arsenal striker endured another frustrating afternoon in the Gunners’ draw with Southampton.

Premier League leaders Arsenal were held to a 1-1 draw on Sunday as Stuart Armstrong cancelled out Granit Xhaka’s opener at St Mary’s.

While the Gunners remain two points clear at the top of the Premier League and have enjoyed their best ever start to a season, Arteta admitted he was ‘very disappointed’ his side failed to secure all three points on south coast.

Jesus was among those to miss chances for the visitors and the Brazilian has now gone five games without a goal for Arsenal.

The £50m summer signing made a superb start to his career at the Emirates Stadium but has not found the back of the net in almost a month.

Asked if he was ‘concerned’ by Jesus’ form, Arteta said: ‘I’m sure today he will be disappointed because he had the chances to put them away.

‘Knowing Gabi, he’s disappointed when he scores two goals and could have scored three or four, so he can do that.

‘But he has the chances, and he’s always there. He gives so much to the team, and it’s a shame he couldn’t put them away today.’

Arteta said he had ‘no complaints’ after the Southampton draw and conceded his team needed to be more clinical in front of goal.

‘This is football,’ he said. ‘We were really good in the first half and totally controlled the game.

‘We created loads of big chances that we didn’t put away. In the Premier League, unfortunately, if you don’t do that when you are top of the game, you can have some difficulties.

‘In the second half, we put ourselves in problems with the amount of giveaways that we had, especially with ball possession, and that didn’t allow us to control the game the way we wanted.

‘Their direct play and long throws, and set pieces disrupted the game a lot. We tried to react, and I still think in the second half, the two biggest chances were ours, but we didn’t put them away.’