Home » Soccer » Mikel Arteta's Arsenal: Too obvious how to beat this struggling and sterile side

“We need to generate more to win football matches,” said Mikel Arteta afterwards. That much is clear but how are Arsenal planning to do that? Their 2-1 defeat to Everton at Goodison Park on Saturday was more of the same from a team languishing towards the bottom of the table.

Ten games have yielded one win and Arteta cannot argue that his team have been unfortunate. Not now. This is no false position, this is a poor Premier League team. The problems are apparent and, perhaps even more worryingly, they are familiar. Arsenal do not create chances from open play let alone score them and that sluggish approach play is beginning to appear as if it is by design.

“Everton have just let them have the ball,” said Jamie Carragher, on co-commentary for Sky Sports. “The same as at Tottenham – let Arsenal have the ball and what can they do? They create nothing.

“When a team drop off and they are winning, it is up to you then to create chances not keep the ball. Possession means nothing then, it is about what you create. The competition is not who keeps the ball the most. Everton are winning, they have dropped off. What can you create?

“I cannot think of anything in this second half where Arsenal have created a chance that they should have scored or the goalkeeper has made a great save. That is the name of the game.”

Fifteen minutes into the second half and Arteta’s side had seen 82 per cent of the ball but not forced Jordan Pickford into a save. That finally came in the 96th minute through Bukayo Saka’s cross-shot.

It made Arteta’s complaint afterwards that his side “lost against Burnley without conceding any shots on target” so curious. By that measure, how could he possibly point to misfortune here after mustering only two shots on target in the match? “We dominated the game,” he told Sky Sports. “We created enough chances at least to draw the game. I think the luck is not on our side.”

It is an alarming assessment of an insipid display.

The penetration is not there but the template to beat this Arsenal team is obvious. They have lost six of the eight Premier League matches in which they have had more possession this season and it would have been seven had West Ham taken their chances. The other one was a narrow victory at home to bottom club Sheffield United. There is no easier team to play against without the ball.

“It is not that they are missing big chances a lot,” explained Carragher. “They move the ball very slowly from back to front and very rarely expose defenders one-on-one.”

Some of the criticism that is being directed at Arsenal has dogged them for a decade, the ceaseless chatter about a lack of character and talk of an absence of leaders in the dressing room.

But the sight of a side so devoid of creativity, so unable to break teams down, must be particularly galling given that the club led the way in this respect even as decline set in under Arsene Wenger.

Where is the verve, the brio, the willingness to commit defenders? Of the teams that have played in the Premier League throughout 2020, only Sheffield United and Burnley have completed fewer dribbles. Arsenal ranked second for dribbles in the previous decade.

They ranked second only to Manchester City in that 10-year period for big chances created too, but that is a distant memory now at a club that find themselves ranked in the bottom half of the Premier League table for shots on target and expected goals in 2020.

This is a team out of ideas. The problem is only exacerbated by the fact that the idea for Arsenal’s opponents need not change until they do. Not every side is as devastating on the counter-attack as the Tottenham pairing of Heung-Min Son and Harry Kane but they can all try it.

The low block is low risk against Arsenal.

“This ball possession story is more for sports philosophers than it is for me,” said Jose Mourinho after the 2-0 win in the derby. “What matters is what you do with the ball. We play well on the counter-attack, we have got fast players. We have been clinical when we have got our chances.

“Sometimes you just have to defend and sit deep.”

Manchester City will not do that in the Carabao Cup on Tuesday. Chelsea and even Brighton might look to engage Arsenal higher up the pitch in the coming weeks in the Premier League. But even if Arteta can negotiate those games then there looms a run of fixtures that could prove critical.

There is the meeting with Sam Allardyce’s West Brom at The Hawthorns to kick off 2021. The visit of Steve Bruce’s Newcastle in the FA Cup. The home game against Roy Hodgson’s Crystal Palace that follows before Newcastle return to the Emirates just four days later. All will sit deep. All will let Arsenal have the ball and wait to see what they can do with it.

Will Arteta be able to find the answers? It was always going to take time. This is an imbalanced squad with some of the higher earners past their prime and many of the more promising talents still years away from it. Mesut Ozil might be a quick fix but how much damage would deviating course so dramatically do to the coach’s credibility?

Establishing the attacking patterns that Arteta is presumably looking for was always going to be the hard part. Breaking down deeper defences was one of the last pieces in the puzzle for Jurgen Klopp at Liverpool and it took him years. Ole Gunnar Solskjaer has had two and considerably more investment at Manchester United and there are still question marks about whether it is clicking.

What will worry Arteta’s advocates is that it is not as simple as him clearing out unwanted players and bringing through the next generation. The fear when watching recent signings such as Willian, who delivered a wretched performance at Goodison Park, is that good money is being thrown after bad.

It is difficult to sell the idea that a mess is being cleaned up while it is still getting messier. 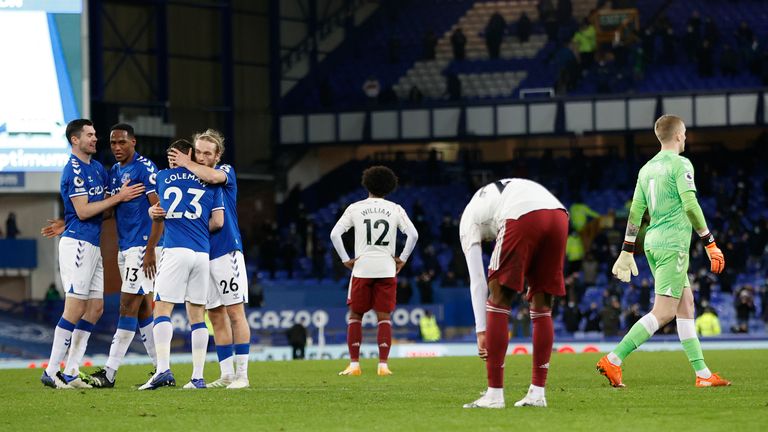 “For them to get back to where they want to be, regular Champions League positions, challenging for honours, certainly the top honours, they are going to have to go through a lot of pain,” added Carragher.

“They will do. There have been a lot of poor signings going back a long time. Arsenal’s recruitment in the last few years has been shocking. Absolutely shocking. Arteta needs three or four transfer windows. This group of players is nowhere near good enough.”

It is a grim thought, but it is difficult to disagree.

Arsenal are not typical relegation fodder. They are not being dominated like Sheffield United and West Brom, and they have not looked quite so leaky defensively as newly-promoted Fulham.

But compare the underlying numbers to, say, fellow strugglers Brighton, and one might ask why they should be regarded as a superior side. The statistics show that the Seagulls have created better chances and given up fewer. They too have had more of the ball. They too have not used it particularly well.

Bad teams can look very different but they share one trait – they are all too easy to beat. Until Mikel Arteta figures out a way to stop that happening, his Arsenal can only be described as a bad team.