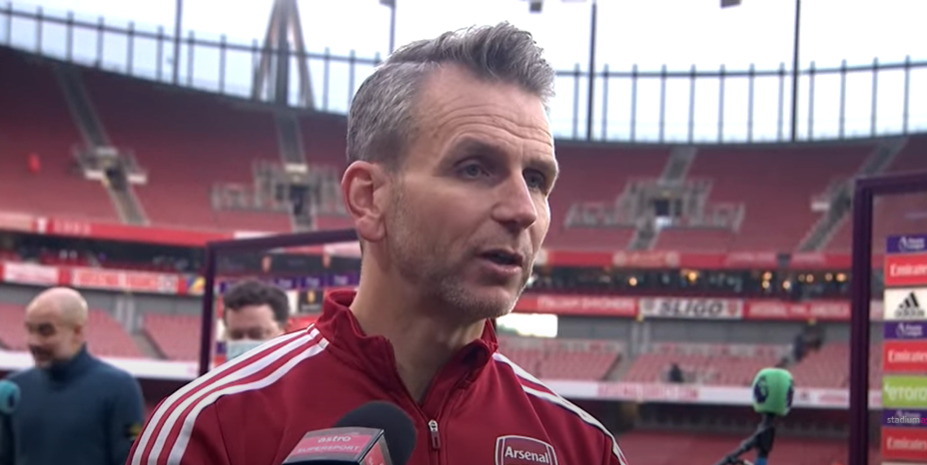 Mikel Arteta’s assistant manager Albert Stuivenberg admitted Arsenal defender Gabriel needed to ‘be smarter’ after being sent off during the Gunners’ 2-1 defeat to Manchester City.

Pep Guardiola’s side pulled further clear in the title race with a hard-fought and controversial win at the Emirates Stadium on Saturday.

Bukayo Saka put Arsenal ahead on 31 minutes but Man City were awarded a penalty after a VAR check in the second half and Riyad Mahrez converted the spot-kick.

Brazilian defender Gabriel was then sent off for a second yellow card and Manchester City finally made their numerical advantage count in injury-time when Rodri poked past Aaron Ramsdale.

Stuivenberg, who took charge of the team after Arsenal boss Arteta tested positive for coronavirus, said the defeat was ‘very frustrating’ and admitted that Gabriel should have been ‘smarter’ after being handed a yellow card.

‘We are very frustrated with the outcome if you play a game like this against one of the best teams in the world,’ he said. ‘At the end to have zero points is frustrating because we should have won the game.

‘It is something we have to learn, we have young players in the team and have to control our emotions. If you are on a yellow you have to be smarter.’

Despite Arsenal leaving empty handed, Stuivenberg said ‘a lot of positives’ could be taken from the Premier League clash as Man City moved 11 points clear of their title rivals and the Gunners stayed fourth.

‘A lot of positives and we have to build from here, this is the level we have to play,’ he added. ‘Everyday we work hard to create this situation.

As well as Gabriel’s dismissal, Arsenal were also aggrieved that Martin Odegaard was not awarded a penalty when he appeared to be fouled by Man City goalkeeper Ederson.

Arsenal’s Aaron Ramsdale said: ‘I am basing it on both penalties – the inconsistency of going to the screen, the referee might have ruled out it straight away when he looked at it.

‘I am at the other end of the pitch for our penalty shout. The goalkeeper comes out with his foot and he either catches him or the ball.

‘The Bernardo [Silva] one, he stood him up and it got given. Penalties are penalties, but for us it is getting told to look at the screen.’