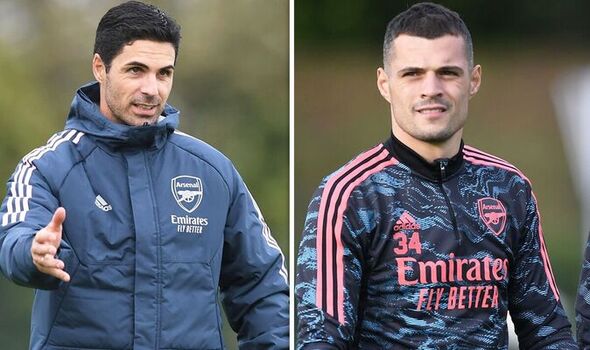 Arsenal boss Mikel Arteta may change his transfer priority for January once he sees how his side performs against FC Zurich this evening. The Gunners will be without Granit Xhaka for the first time this season due to suspension.

Xhaka has featured in every one of Arsenal’s 17 matches so far this term. The Swiss has enjoyed a new lease of life as a left-sided No 8 and has become a favourite with supporters.

Three years after he was stripped of the captaincy by Unai Emery, Xhaka is enjoying his time in north London more than ever. He is one of the first names on the team sheet for Arteta.

The one game he didn’t start this season was away to Bodo/Glimt in the Europa League but Arteta needed him to come on for the final 30 minutes in a tight 1-0 win in Norway. However, he will not be available to be called upon this evening.

Arsenal should have too much for Zurich even without Xhaka. But removing an almost ever-present from the team will leave a sizable gap to be filled.

Arsenal attempted to sign a midfielder late in the summer but failed to land Aston Villa’s Douglas Luiz. He has now signed a new contract at Villa so will not be leaving in January.

Arteta also wanted a winger in the summer but again was not able to get a deal over the line. A wide attacker is thought to be his priority in January.

Arsenal need more support for Bukayo Saka and Gabriel Martinelli, who have each started every Premier League game this term. But tonight’s match may open Arteta’s eyes if it doesn’t quite go to plan in midfield.

Albert Sambi Lokonga has struggled of late, while Fabio Vieira perhaps isn’t physically ready to be a regular in the Premier League. Xhaka has quickly become one of the most important players at the club and how Arsenal perform without him will be crucial.

The way he occupies the left channel and makes forward runs into the box throws into question what managers were doing with Xhaka for his first six seasons at the club. Any sort of injury to the 30-year-old could seriously disrupt Arsenal’s form this season.

Arteta will be watching his back-up midfielders closely against Zurich. And if he doesn’t think they are up to the job, his priority in January may switch to signing someone who can.