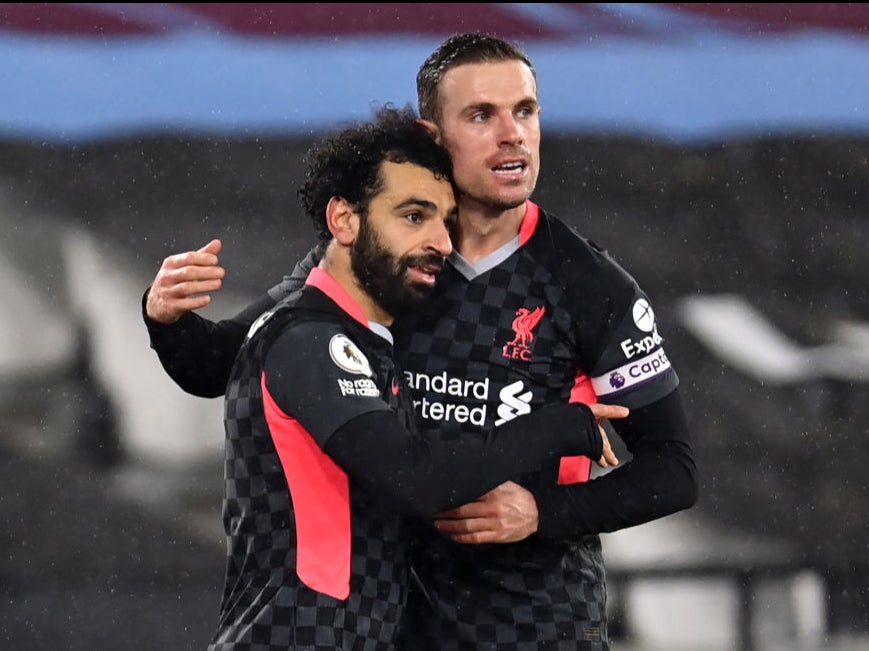 It consisted of two 40-yard diagonal passes: the first from Trent Alexander-Arnold to Xherdan Shaqiri, the second from Shaqiri to Salah. From start to finish, there were only four touches between the three of them, the final two seeing the Egyptian control the ball out of the sky with his right foot and clip it beyond Lukas Fabianski with the outside of his left. Simple yet devastating, efficient yet beautiful. Liverpool 2020/21 doing things the 2019/20 way.

The importance of this win against one of the form teams in the league is as much in the three points that take Liverpool third, four behind leaders Manchester City, as it is in those who achieved it. The XI was patched together from front to back, more so than usual at the top end with news earlier in the day that Sadio Mane has joined the long list of those struck down by injury. Fingers remain crossed that this minor muscle complaint is only a one-match impediment.

It was only on Thursday that Mane had helped inspire victory over Spurs: the 3-1 as important for being the first win in six as it was for breaking a run of four matches without a goal. With his absence, along with Joel Matip’s ankle keeping him out of the second half of that encounter and totally out of this one, and Roberto Firmino starting from the bench, building momentum from that overdue win was no certainty.

Not simply because they were up against this iteration of West Ham, organised with frills in all the right places and four wins on the bounce to show for it. But the areas where Liverpool were short corresponded to their host’s strengths.

Divock Origi and Xherdan Shaqiri, very much understudies alongside Mohammad Salah, were unable to coax a stubborn back four too far out of position. Nat Phillips, accompanying Jordan Henderson in the centre of defence, spent so much time with Antonio by his side they may officially qualify as a support bubble.

A cagey first-half was probably edged by the hosts, who saw less of the ball but more of the worthwhile openings. A sweeping move from right to left on 24 minutes twisted Liverpool into all sorts and eventually needed Andy Robertson to head off the line, albeit a relatively straight forward clearance after deflections had taken the sting out of Tomas Soucek’s shot.

Salah began darting behind as Liverpool opted for an aerial route beyond the last line. Thiago Alcantara plugged to find a prettier route with little avail, though did produce the pass if the opening 45 minutes. Out on the left, a couple of jinks inside created an angle for a reverse pass played to perfection through a closing window between the last man and the goalkeeper. Origi’s finish on the slide was sent the wrong side of the near post.

It elicited a brief uptick in Liverpool’s intensity before the whistle blew for half-time, but carried over into the second period, no doubt with some helping words from Jurgen Klopp. And it was through sharper shifts and some more calculated attacking play that they were able to polish off the match within 23 minutes of the second half.

Perhaps we could narrow that window to 12 minutes. For it was that long after the introduction of Curtis Jones that Liverpool had their first two. His assist for the opener came within 34 seconds of stepping onto the pitch.

On for James Milner in the 56th minute, the midfielder, who only turned 20 on Saturday, drove into the final their to put West Ham on the back foot, off-loaded to Alexander-Arnold and continued his run to get the ball back before finding Salah, who did the rest.

That this had come a few moments after Antonio had spurned an opportunity to grab lead – curling wide from the edge of the box off a Jarrod Bowen pullback – was a blow. Albeit one that threatened to manifest.

West Ham could have no qualms over the second, even if it did emanate from their corner. A headed clearance broke to Alexander-Arnold, with three teammates in black sprinting’s away towards goal. A swipe sent Shaqiri off on the left-wing and his first-time cross seemed unnecessary at first. But as it dropped to Salah, onto the perfect controlling touch, before the equally deft finish, not even claret-and-blue eyes could find fault.

Soon it was time for the substitutes to dig in. Firmino, replacing Shaqiri immediately after his assist, played a sick one-two with Alex Oxlade-Chamberlain, on for Origi, whose between the legs flick caught all bar the Brazilian by surprise. The side-foot from Wijnaldum was academic.

No doubt there will be claims Dawson’s goal, free and arriving late at a corner three minutes from the end, will take the gloss off this result. But it was another step towards the defending champions usual high standards. The second reminder in four days that Liverpool are not giving up their title without a fight.