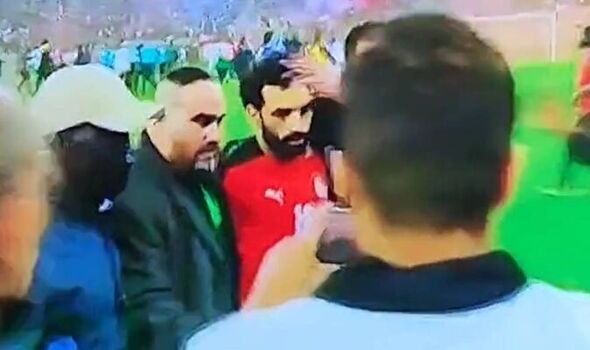 New footage has emerged of Mohamed Salah being pelted with missiles with dozens of officials trying to protect the Liverpool star as he made his way down the tunnel following Egypt’s defeat to Senegal on Tuesday evening. Egypt held a 1-0 lead over Senegal heading into the second leg of their World Cup play-off tie in Cairo.

An own goal from Hamdi Fathi inside four minutes had proved to be the only goalmouth action in 90 minutes, forcing the game into extra time. The tie ended up being decided on a penalty shoot-out in a repeat of the Africa Cup of Nations final.

Senegal captain Kalidou Koulibaly was first up for his country but he sent his effort crashing off the woodwork. Salah, who failed to take a penalty in the AFCON final, stepped up to take Egypt’s first spot-kick.

But the Liverpool superstar was also unable to convert, skying his effort high over the crossbar. More penalties were missed before Senegal were in the ascendancy after Edouard Mendy saved from Mostafa Mohamed.

Sadio Mane had the responsibility to step up for Senegal next, who smashed his effort down the middle to send his country through to the 2022 World Cup. Wild celebrations followed but there were also some concerning scenes at the end as Egypt’s players tried to head back down the tunnel.

Salah was seen being escorted by security off the pitch with one man holding his hand over the Liverpool star’s head. But footage has now emerged of Salah cowering as he made his way down the tunnel after being struck by missiles.

The 29-year-old eventually made his way off the pitch and into the dressing room. The Egyptian FA have now released a damning statement following the match, claiming their players were subject to racist abuse.

The statement read: “The Egypt national team have been exposed to racism with offensive signs in the stands against the Egyptian players in general, and Mohamed Salah in particular. The crowd also intimidated the players by throwing bottles and rocks on them during the warm-up.

“The Egyptian group’s busses have also been exposed to assaults that led to broken windows and injuries; filed with pictures and videos as proof in the complaint submitted.”