Report as Motherwell return to action with big win; Steve Robinson’s side stay eighth on 11 points; They have games in hand on sides above them; Ross County stay seventh on 12 points 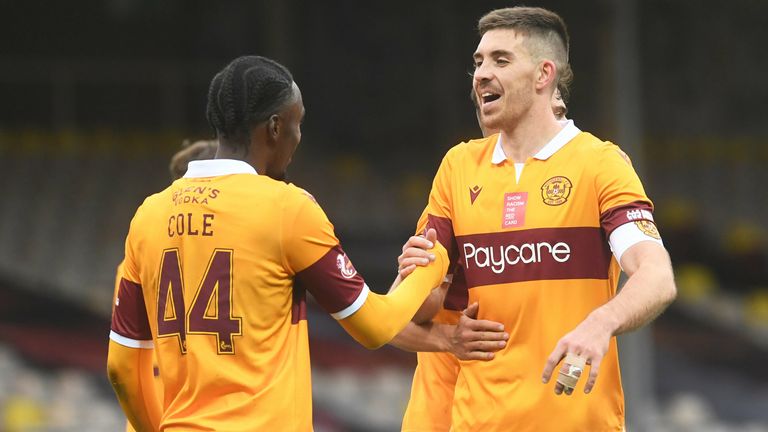 Motherwell overcame the loss of goalkeeper Trevor Carson to record a 4-0 Scottish Premiership victory over Ross County in their first game for four weeks.

Carson went off injured in the 28th minute but recent signing Aaron Chapman enjoyed a clean sheet and a thumping win on his unexpected debut as the hosts produced a clinical display.

Tony Watt, Mark O’Hara, from the penalty spot, Callum Lang and Devante Cole were on target as Motherwell showed they had not been adversely affected from their lay-off, which was a result of Kilmarnock and St Mirren’s Covid-19 problems.

Well did not have it all their own way – Declan Gallagher and Watt produced excellent goal-line clearances – but the clean sheet was a major plus given major selection problems at the back.

Motherwell had seen defenders Bevis Mugabi, Rickie Lamie and Liam Grimshaw drop out through injury and a positive Covid-19 test since their previous game, a 5-1 defeat by Rangers on September 27.

Manager Robinson was already missing four other defensive and goalkeeping options through long-term injuries and reverted to a flat back four with midfielder O’Hara playing at centre-back. The situation got worse when Carson could not continue moments after receiving treatment for a knee injury following a collision with County winger Regan Charles-Cook as he came out of his box to head clear.

There had been few chances until Watt opened the scoring in the 37th minute when he attacked Nathan McGinley’s inviting cross and knocked home from six yards. Cole, making the first appearance of his second spell at Fir Park, soon fired over on the turn.

Former Accrington and Peterborough goalkeeper Chapman, another recent signing, clutched a couple of testing crosses before being beaten in the final moment of the half.

However, Gallagher cleared off the line after Charles-Cook had got on the end of Charlie Lakin’s cross.

Motherwell midfielder Liam Polworth curled just wide inside 60 seconds of the restart and the hosts doubled their lead in the 54th minute after Alex Iacovitti brought down Watt with a sliding challenge. O’Hara sent Ross Doohan the wrong way. County came close to making a game of it. Ross Stewart saw his header cleared off the line by Watt before volleying wide from six yards following Michael Gardyne’s knockdown. The forward appeared to be taken out in the process but referee Craig Napier gave a goal kick.

The game soon drifted away from the visitors when substitute Lang turned home from close range in the 64th minute after Gallagher had headed Polworth’s corner back into the goalmouth.

Doohan saved well from Watt before Cole raced clear of the County defence following a long ball and produced an emphatic finish high into the net in the 72nd minute.