‘After our dad was killed, mum used to threaten us with a call to Bert to come and sort us out’: Nephew of ‘Lisbon Lion’ Bertie Auld recalls life living with a legend after the Celtic hero’s death at the age of 83 last month

At the age of 11, Ian Cairns sat by his older brother William as his Uncle Bert delivered the news that their father had been kicked to death outside a Glasgow pub. The passage of time has done nothing to blur the sharp memories of a Saturday morning in 1975.

A Celtic icon, Lisbon Lion and leader of men, Bertie Auld got the words and tone just right. When the occasion demanded, he usually did.

‘We were staying at my gran’s house and Uncle Bert called me and my brother into the room to give us the terrible news,’ Cairns recalls now. 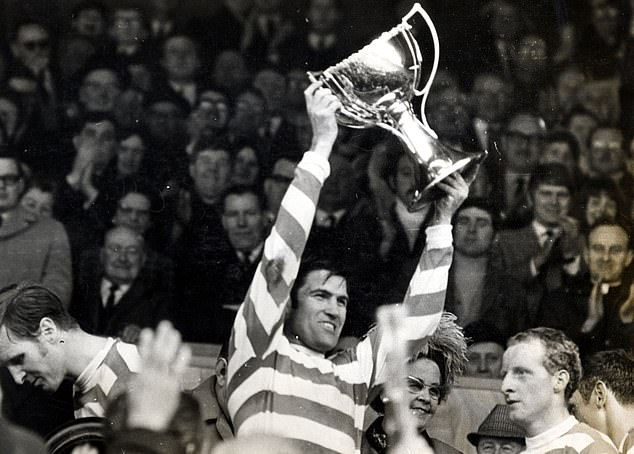 ‘I can remember it word for word and how he said it and the impact it had on me despite the fact it was 46 years ago.

‘He was an imposing figure. When dad was killed, we were very young and mum used to threaten us with a phone call to her Bert to come and sort us out.

‘But, more than that, he was a good man and I got to spend a lot of time with him.

From that point, he became quite special to me.’ Long before his death last month at the age of 83, Auld became special to tens of thousands of football supporters.

On a sun-baked afternoon in Portugal’s old national stadium in Lisbon, the startled players of Inter Milan looked on as the midfielder belted out the words of Glen Daly’s Celtic Song in the tunnel before kick-off. In that moment, he confirmed his status as the larger-than-life embodiment of the first British team to win the European Cup.

He left Celtic to play for Hibs for two years before managing the Easter Road side to the First Division title in 1980/81. Dementia robbed him of a chance to milk the acclaim of the two sets of fans at tomorrow’s League Cup final at Hampden. Granted VIP access to the great man’s life over five decades, his nephew Ian agrees he would have lapped it up.

‘Honestly, I could take you to Marks & Spencer at Parkhead Retail Park and show you where we used to meet up in the car park,’ said Cairns.

‘It’d take 20 minutes to get in the door then another 30 minutes to get served because he was laughing and joking with everybody.’ In the face of a debilitating illness, the laughs became a little harder to find.

Ex-professional footballers were found to be three-and-a-half times more likely to die of a neurodegenerative disease. And Auld was the fourth member of the Lions after captain Billy McNeill, legendary winger Jimmy Johnstone and Lisbon goalscorer Stevie Chalmers to succumb.

‘Robert, his son, dealt with the illness wonderfully,’ added Cairns. ‘At one point, there wouldn’t have been a week gone by when I wouldn’t see him or speak to him.

‘We didn’t see as much of him over the last four or five months. I last saw him two weeks before he passed in the hospital. Robert and I walked him along to the day room and he was still winking and gesturing and pulling the faces, but he was finding it more difficult by then. He gave me a lovely cuddle when I was leaving.’

A charismatic manager of Partick Thistle then Hibs, his status as one of the true characters of Scottish football ensured he never had to put his hand in his pocket in a public house in Glasgow or Edinburgh. Or, when he’d had one too many, pay for his own taxi.

‘Mum and Uncle Bert were the two favourites and when he was a manager with Partick Thistle he used our house as a bolthole, if you like,’ continued Cairns.

‘He’d have a couple of beers and, because he lived away out in Strathaven, it was easier just to jump in a taxi and come to our house in Knightswood.

‘I can still see him the night he arrived in a taxi sprawled in the back seat with the black boots, the black jeans and the black shirt on like the Glaswegian Johnny Cash.

‘He was telling the taxi driver where to go for his £16 fare, turning the air blue.’ The driver’s first mistake was admitting he was a Rangers supporter. His second was voicing an opinion on football. In blunt terms, he was told that his knowledge had as much substance as the centre of a doughnut. Seeking a peaceful resolution, the cab driver offered to settle for the great man’s autograph in lieu of payment.

Those who entered the court of King Bertie basked in the reflected glow of his personality. Latterly, he became known as much for his exuberance as he was for his days as a hard-as-nails technically gifted midfielder. A relationship with Bertie Auld had much the same impact as the freedom of Glasgow.

‘When he was the manager at Partick Thistle and they played Rangers, I would be able to take five or six of my pals up for the game,’ said Cairns. ‘They would hide their scarves and we would go in through the players’ entrance.

‘Uncle Bert would shout: “In you all go”. And when they played Celtic I played the same trick with my Celtic pals. So from 13 or 14 years of age, I realised that he was important.

‘We would go out to his farm outside Strathaven and spend time with my cousins. He had stables for about seven horses. My cousin Susan (Bertie’s daughter) was a champion showjumper and Robert (his son) was good on the horses as well.’ Sporting excellence was imprinted on the family DNA. Ian’s older brother Willie Cairns played professionally for Queen’s Park, Partick Thistle and Dumbarton before he died tragically of a heart attack in Canada aged just 34.

When his mother passed away six years ago, the family embarked with a heavy heart on the task of clearing out her semi-detached home in Knightswood. Behind two wardrobes in the bedroom, they stumbled upon hidden treasure. 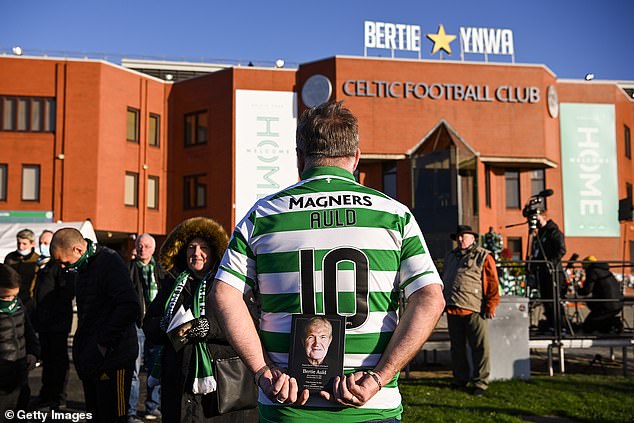 ‘We found uncle Bert’s Birmingham City contract in a small envelope,’ said Cairns. ‘When you opened it up, it became a massive sheet of paper. There were all kinds of things in there.’ Auld’s mother ran a shop in Maryhill Road, the profits bolstered by Partick Thistle players trudging back to Firhill from training in Ruchill Park and stopping by for a filled roll and a bottle of Irn-Bru.

‘When gran died in 1995, we were cleaning her house out and I found a black polythene bag at the bottom of one of her cupboards,’ added Cairns. ‘I opened it up and it had a Holland top, a Scotland top and a Wales top from his three international caps in 1959.’ Auld’s playing career finished at Hibs as one of the most decorated Scottish footballers of all time. He played in two European Cup finals, winning one and losing the second to Feyenoord in Milan.

But for an unexplained omission from the Scottish League Cup final of 1957 – a 7-1 win over Rangers – he’d have played in two of the most iconic games in Celtic history. Former chairman Sir Robert Kelly had a disproportionate say in the team selection that day and some still suspect he had a hand in Auld’s Scotland career ending at the age of 21 with fewer caps than Robbie Stockdale or Kevin Kyle.

Cursed by a quick temper, the last of his three international appearances came in a 2-1 win in the Netherlands in May 1959.

‘He wasn’t proud of this but he was the first Scotland international to be sent off,’ explained Cairns. ‘There was a kerfuffle at the end of the Holland game and he was red-carded. ‘At that time, it was up to a club to put players forward to the committee for international recognition. And the rumour is that Celtic chairman Bob Kelly was embarrassed by the red card and had an input into what happened with Scotland.

‘How true that is I don’t know for certain. But Uncle Bert liked a song, a party and a drink and, let’s face it, those were three things Mr Kelly didn’t like much at all…’ Dementia was the one opponent he could never hope to conquer. God knows, he tried his best.

In August, after the diagnosis, Auld’s son Robert arranged a lunch in the Celtic Skybox for family and friends, including Lions team-mate John Clark.

‘We were standing looking at the magnificent stadium,’ said Cairns (left). ‘Uncle Bert was frail and not the way he used to be. But I said to him: “Here Uncle Bert, this will bring back memories”.

‘He just looked at me with a wee twinkle in his eye glanced at the pitch and said: “Naw son, my memories are all down there…”.’