Match report as Czech Republic booked their place in the quarter-finals of Euro 2020 against Denmark after Tomas Holes and Patrik Schick secured 2-0 win over Netherlands; Dutch were reduced to 10 men when Matthijs de Ligt was sent off The Czech Republic set up a quarter-final tie with Denmark as second-half goals from Tomas Holes and Patrik Schick dumped 10-man Netherlands out of Euro 2020 with a 2-0 win in Budapest.

Following a goalless first half, Netherlands defender Matthijs de Ligt was sent off upon VAR review for a deliberate handball as the last man as he tangled with Schick (55).

The Czechs made their numerical advantage count when the excellent Holes converted at the far post (68), and the contest was put to bed when Schick tucked in Holes’ cross to notch his fourth goal of the tournament (80).

Having excelled in the group stages, it was a disappointing end for Frank de Boer’s side, but Czech Republic march on to face the emotional wall of Denmark in Baku next Saturday. 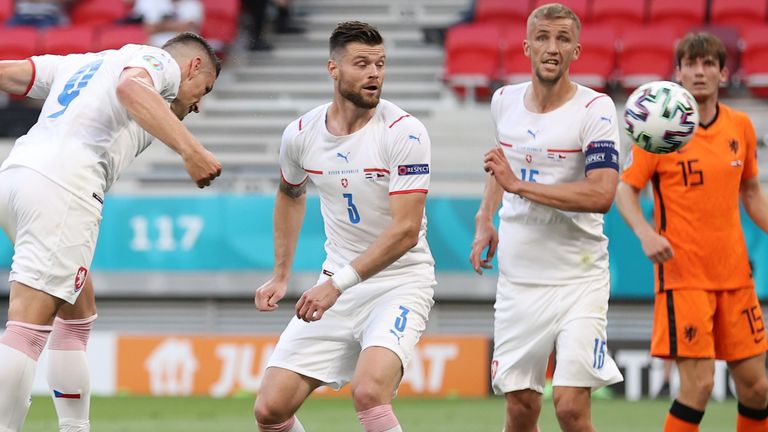 Man of the match: Tomas Holes.

How the Czechs shocked Netherlands

The Czechs have now reached a fourth quarter-final in seven European Championships, and, having been runners-up at Euro 96, they will be dreaming of Wembley once more on July 11.

This was the first meeting between the Netherlands and Czech Republic since October 2015, when the Dutch were beaten 3-2 in a Euro 2016 qualifier.

Indeed, they had lost each of their previous two games against the Czechs – both coming in qualifying for the previous European Championships.

Netherlands head coach De Boer continued with a 5-3-2 formation, despite being heavily criticised when he first unveiled the approach. But the debate over the decision to ditch their traditional 4-3-3 line-up had been stifled by a 100 per cent start to the tournament. 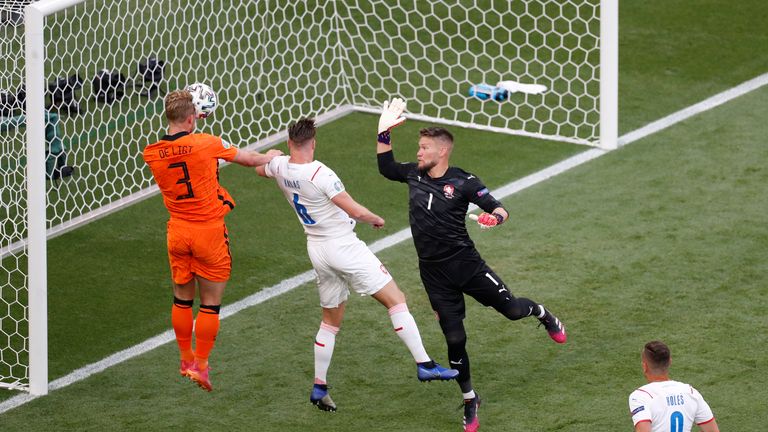 It was the Dutch who made the brighter start in front of a packed house at the Puskas Arena as De Ligt rose to meet Daley Blind’s short corner after eight minutes, but he was unable to direct his header from an acute angle on target, before Memphis Depay blazed wide from the follow-up.

The Netherlands, who had found their rhythm through three group games in Amsterdam and were the leading scorers in the opening three matches – cantering to top spot – came close again five minutes later when Denzel Dumfries’ diagonal run was found by Blind, but Tomas Kalas did well to slide across and block the shot.

Czech Republic had only won one of their previous seven games at major tournaments, but they fired a warning sign midway through the opening period as Tomas Soucek outmuscled Marten de Roon to meet Petr Sevcik’s cross, but his glancing header did not trouble Maarten Stekelenburg.

The subsequent drinks break did little for De Boer’s men as their opponents came even closer with seven minutes of the first half remaining. Soucek this time was the architect as he found Lukas Masopust, but Antonin Barak’s attempt on the overlap was flicked over by a brilliant recovery block by De Ligt. 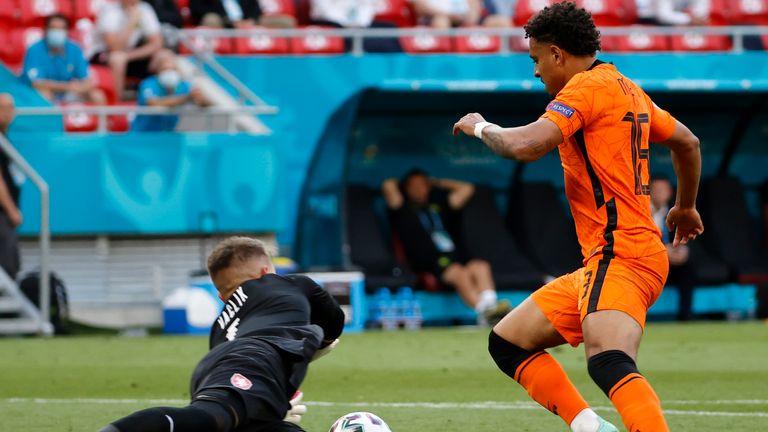 At the interval, Sky Sports’ Gary Neville said on ITV: “The Czech Republic have had the better chances. A bit more of a killer instinct and they could be ahead.”

The Netherlands needed a fast restart but an early booking to Dumfries for a flailing arm on Pavel Kaderabek set the tone for an ill-disciplined second period. The game turned on its head in the 52nd minute when Donyell Malen cut through the Czech defence but was denied by Tomas Vaclik as he sought to round the goalkeeper. 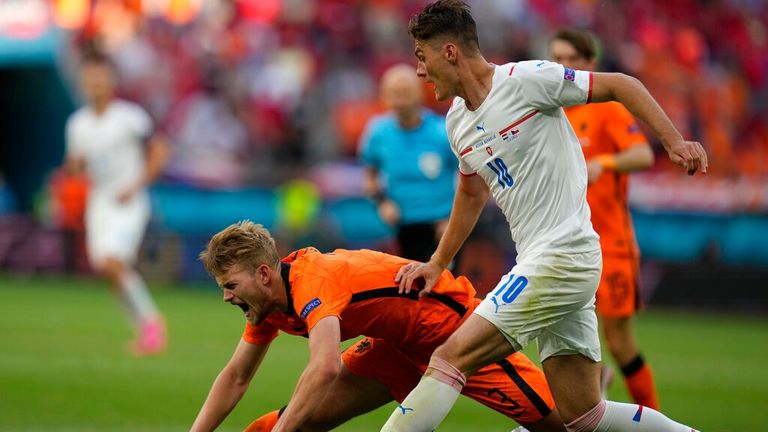 Jaroslav Silhavy’s side took full advantage of the reprieve as a searching ball forward caught De Ligt the wrong side of Schick within 60 seconds, with the centre-back forced into drastic action to shovel the ball from underneath him with his hand.

Referee Sergei Karasev did not spot the initial infringement, but, upon VAR review by Stuart Attwell, the booking was upgraded to a red.

Sky Sports’ Nick Wright said: “The Czechs were already finding a lot of space in attacking areas and there’s likely to be more for them now following that red card. The Dutch have switched to a back four. Van Aanholt and Dumfries will surely have to be more selective about when they bomb forward from now on.”

Frustrations were boiling over for the men in orange, and they duly fell behind in the 68th minute when Kalas rose at the far post to head a free-kick back across goal for Holes to stoop and head in from close range. The second drinks break in the sweltering Budapest heat did little to stem the tide towards Stekelenburg’s goal, and, following a raft of substitutions, the Czechs made the game safe.

Holes did remarkably well to skip through the Dutch midfield before his cut-back was tucked in by the composed Schick at the near post.

This was the first major shock of Euro 2020, and, with Denmark now awaiting in Baku, the prospect of replicating their semi-final appearance in 2004 is becoming an increasing reality for Czech Republic. 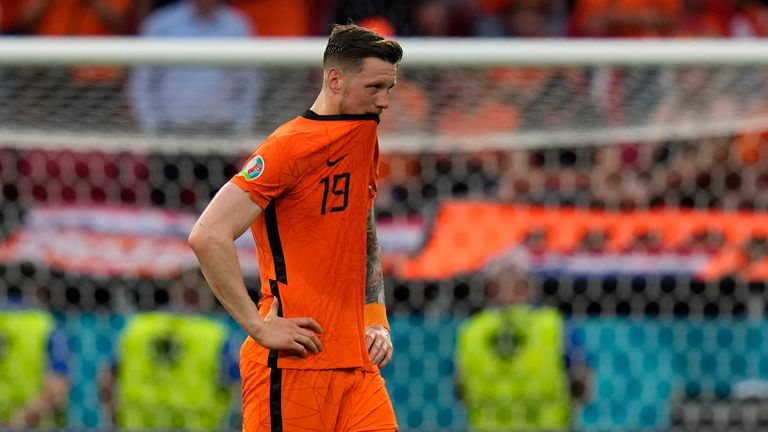 “The first Czech goal was coming… they had the Dutch on the ropes. They were punching and punching. De Boer’s men wilted like you wouldn’t believe… they looked really poor after the sending off. They didn’t tactically adapt.

“The Czechs fully deserved it. They had more character and more personality.”

On the minute that turned the game…

“Malen does so well – then he just complicates it. The goalkeeper anticipates it, knows what he’s going to do. That then runs into the moment of the match…

“I never buy into it that you slip, that you’re unlucky. You only slip as a defender when you’ve got your footing wrong, when you’re out of position when you’ve misread the flight of a ball and you panic.

“He gets his footing wrong because he’s misread the ball. It’s a really poor bit of defending. When the first bit goes wrong, a young defender makes the second mistake. An experienced one makes the first mistake and then lets the forward go through because you’ve still got 11 on the pitch.” Man of the match – Tomas Holes 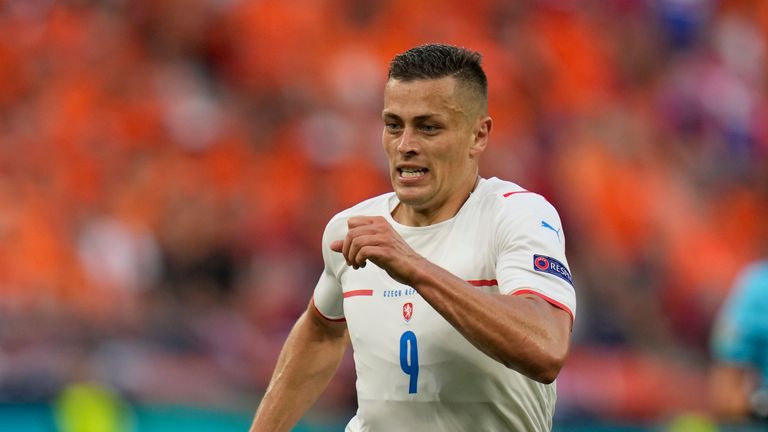 Holes became the first Czech player to both score and assist in a single match at the European Championships since both Jan Koller and Milan Baros also did so against the Netherlands at Euro 2004.

Besides his offensive contributions, the defensive midfielder nullified Frenkie de Jong, producing four tackles and regaining the ball on nine occasions – more than any of his team-mates.

Czech Republic will play Denmark in Baku on Saturday July 3 in the quarter-finals; Kick-off 5pm.

The Euro 2020 knockout stages are up and running! Already, Wales‘ adventure has come to an end after a comprehensive 4-0 defeat to Denmark, while Italy did not have things all their own way against Austria at Wembley. Roberto Mancini’s side needed two extra time goals to seal their place in the quarter finals. Sky Sports’ News reporter Geraint Hughes and Sky Sports features editor Peter Smith join Kate Burlaga to look back at the opening last-16 ties…

PART 1 | Sky Sports News report Geraint Hughes reflects on Wales‘ chastening defeat at the hands of Italy. Where did it go wrong for Rob Page’s side in Amsterdam? He also gives his verdict on Wales’ tournament and what the future may hold for the team and Gareth Bale as they look to qualify for 2022 World Cup.

PART 2 | Italy took over Wembley on Saturday evening and Sky Sports’ Peter Smith was there to see Roberto Mancini’s side’s book their quarter final spot. However, it wasn’t as plain sailing as many people predicted. We discuss the game and Italy’s prospects going forward as they await a huge showdown with wither Belgium or Portugal in the last eight in Munich on Friday. Finally, the countdown is on for England vs Germany on Tuesday. We look at what is coming up across Sky Sports’ digital platforms as we build up to the huge Wembley clash!

Alexandre Lacazette has stepped up to become Arsenal's talisman