Report and free match highlights as Leicester win seven of their first nine away games for the first time, matching their entire tally from last season; Andy Carroll scores late on – his first goal for Newcastle in 10 years and his first since returning in August 2019

Wonderful finishes from James Maddison and Youri Tielemans fired Leicester to a 2-1 win at Newcastle as they registered a seventh away Premier League win this season.

Jamie Vardy had the ball in the net for Leicester in the 13th minute, but it was ruled out for offside, in a tame first half with few highlights. Not since September 2018 had St James’ Park witnessed fewer shots in the first half of a Premier League match.

Both sides improved in the second half, with Maddison (55) firing Leicester into the lead shortly after the break. Tielemans (72) then powered home a great finish before Andy Carroll (82) made it a nervy finish for the Foxes with a left-foot volley.

It was the first time Carroll found the net since re-signing in August 2019 and his first Newcastle goal since Boxing Day in 2010.

Leicester held on to win a seventh away Premier League game, matching their entire tally on the road from last season. The result sends them third in the table above Tottenham and a point behind joint leaders Liverpool and Manchester United. Newcastle remain in 15th.

How Leicester won again on the road 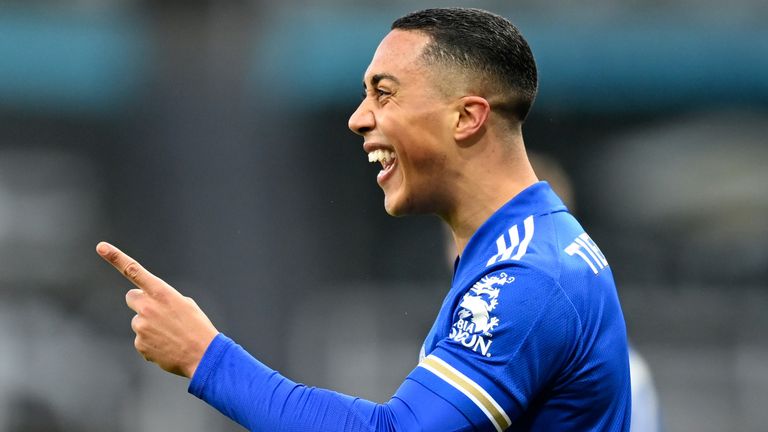 Leicester began well and had sights of goal in the opening 15 minutes. The returning Maddison fired an effort wide early on, before Vardy and Tielemans missed chances to send the ball goalwards. However, any goal would have been ruled out anyway with Vardy offside.

Vardy did have the ball in the net shortly after. Maddison slotted the striker through, and he sent the ball trickling over the line with an angled finish, but the offside flag was raised.

Man of the match: Youri Tielemans.

Newcastle began to find their feet though and, much like they did with Liverpool in midweek, frustrated Leicester in a stop-start first half. The Foxes calved out a half-chance after some neat play between Maddison, Harvey Barnes and Timothy Castagne, but the latter’s cross hit Barnes in the face before going wide.

The half ended with a set-piece each and both teams mustered a shot from them. Firstly, Wesley Fofana sent a header swinging over the crossbar from a Maddison corner, before Ciaran Clark also fired wide after Matt Ritchie delivered a free-kick.

In a much more free-flowing second half, both sides went close early on. Castagne sent a lovely ball over the top for Vardy, but he could only find the side of the net. Newcastle then had their best effort, with another long, floated pass from Fabian Schar finding Ritchie on the left. He fired a cross in, but Evans was just ahead of Callum Wilson to see the ball away.

Leicester broke the deadlock 10 minutes after the break with a superb goal from Maddison. Barnes played in Vardy down the left and he weaved too easily past Federico Fernandez. He then pulled the ball back for Maddison at the top of the area, who sent a thunderbolt effort past Darlow. 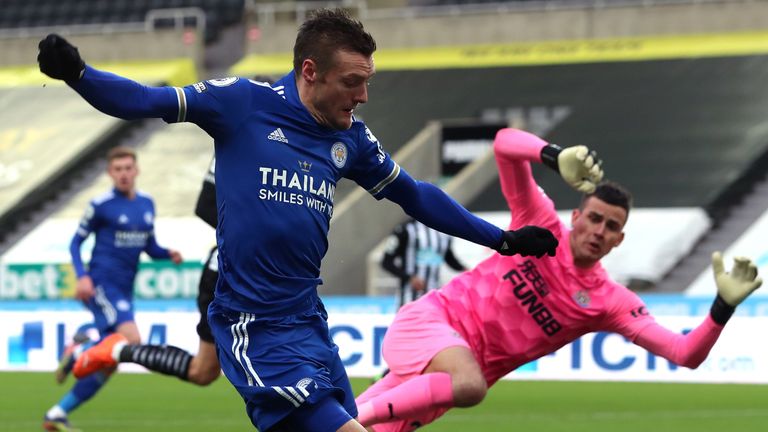 Newcastle saw some good attacking play between the two goals – substitute Jacob Murphy a lively addition – but it was Leicester who scored next to double their lead. Tielemans was involved in stealing the ball back in midfield, driving forward before Maddison picked out Marc Albrighton on the right. His fizzing cross landed perfectly for Tielemans as he hammered a volley home.

Vardy could have made it three shortly after, but smashed an effort onto the crossbar while also being flagged – again – for offside. But Newcastle sprung a late surprise as Carroll scored two minutes after coming on. Leicester failed to properly clear anther Ritchie free kick, dropping to the striker who fired home with a precise volley. 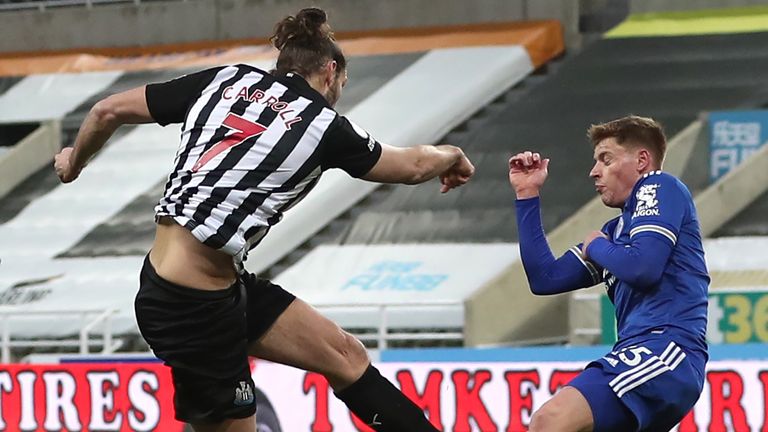 Newcastle then began to push for the equaliser and Wilson should have scored in, firing an effort at Schmeichel from close range. However, he was also flagged for offside. Harvey Barnes – who had scored in the previous two games – also went close with two late efforts but another goal wasn’t needed as Leicester held on for another away win.

Man of the match – Youri Tielemans

Like much of the Leicester squad, Tielemans made a welcome return to the XI on Sunday and once again produced an impressive performance. He made a team-high 28 passes in the opposition half with 81 touches overall.

He also scored an impressive goal, which he helped to create when he smuggled the ball to Maddison in midfield. The finish was superb, as was his run to get there.

Tielemans has now scored four Premier League goals this season, his best tally in a single campaign in the competition. Much like Leicester themselves, he prefers life on the road, with each of the Belgian’s last five league goals coming away from home.

Both sides are in FA Cup action on Saturday. Newcastle face a trip to holders Arsenal while Leicester travel to Sky Bet Championship side Stoke. It’s another quick turnaround from Newcastle, who host Sheffield United in the Premier League on Tuesday, January 12, live on Sky Sports; kick-off 6pm. For Leicester, they welcome Southampton on Saturday 16 January; kick-off 8pm.