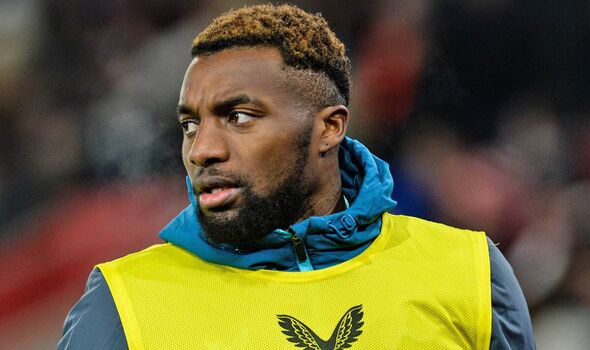 Newcastle are open to offloading Allan Saint-Maximin this month as they look to land Everton’s Anthony Gordon, according to reports. The Magpies have seen the Frenchman fall out of favour this season. And whether he leaves before the end of the month remains to be seen.

Newcastle signed Saint-Maximin back in the summer transfer window of 2019, with the Frenchman becoming a popular player in the three-and-a-half years since.

However, he’s fallen out of favour under Eddie Howe this season – despite his obvious talent.

Now, according to the Daily Mail, Newcastle are open to selling Saint-Maximin before the transfer window shuts next week.

With the Toon confident of landing Gordon, amid a chaotic season at Everton, their current winger’s days at the club may be numbered.

The report also adds that Newcastle had tried to use Chris Wood in a swap for the Toffees star, too.

However, Wood has since proceeded to join Nottingham Forest on loan until the end of the season – a year after arriving from Burnley.

Forest themselves have been touted as potential suitors for Saint-Maximin as they look to stay in the Premier League.

Yet Howe’s comments after his side’s 1-0 win over Southampton on Tuesday suggests the player could still have a future on Tyneside.

“I thought all the subs, even Jacob coming on, he didn’t have as long as the other two, did really well,” said Howe.

“Alex’s contribution to the goal was exceptional, and he could have scored right at the end. Really, really pleased with him.

“And Maxi, his decision-making, and when to dribble and when to pass, was at the highest level. I think we’re seeing Maxi hopefully return to his best form.”

Howe was asked about Gordon after his side’s Carabao Cup victory.

And he kept his cards close to his chest by saying: “Honestly, I’ve got no idea.

“I’ve been preparing for the game, so I’ve got no idea. But I wouldn’t comment on individual players anyway.

“I’ve got no idea if we’ve got any closer to anything, but we’re actively looking, I have said that. But as of tonight, I have no update.”

Former Arsenal star Emmanuel Petit, meanwhile, thinks Saint-Maximin would be a great signing for the Gunners to make.

“If Saint-Maximin can improve his decision-making and do the right things at the right moments,” he said.

“Just like Martinelli, I can imagine him being a revelation at Arsenal. He has so much pace and makes the difference with the ball at his feet.

“One against one, he is fearless when he faces defenders.

“How will he respond to being on the bench at Newcastle? I’m pretty sure at the end of the season, if his situation is the same, there will be some big talks between him and Newcastle.

“Maybe there is an opportunity for Arsenal if he is unhappy or unsettled.

“He is not the first name on the team sheet anymore and he was the star at the club before everything changed. Now he is on the bench. Football moves fast.”