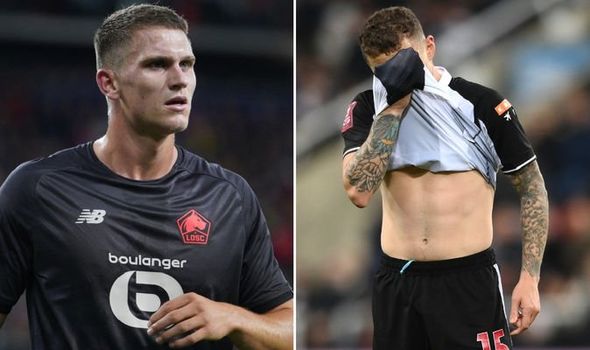 Newcastle have been warned they may have made it more difficult for themselves to upgrade on their defence with signings such as Diego Carlos and Sven Botman this month due to the nature of their FA Cup exit on Saturday. League One’s Cambridge, sat 16th in the third tier, dumped the Magpies out thanks to Joe Ironside’s goal at St James’ Park.

Eddie Howe’s side were looking for some respite in the FA Cup having won just one Premier League match all season and he made just three changes from their last match.

But they badly toiled at home to Cambridge and were deservingly dumped out of the competition despite the likes of Allan Saint-Maximin and new signing Kieran Trippier starting.

Newcastle are looking to improve their chances of avoiding relegation to the Championship with a raft of January additions, having drafted in Trippier from Atletico Madrid for a fee of £12million plus add-ons this week.

After Trippier, the next priority for the Tyneside outfit is bringing in a centre-back and perhaps two if Howe gets his wish. They want to recruit both Sevilla’s Carlos and Lille’s Botman.

MUST READ: Newcastle have Botman transfer hurdle as ‘second approach made’

Signing both could cost as much as £60m with Newcastle believed to have had approaches for both players turned down by their clubs.

But Premier League winner Chris Sutton, the former strike partner of Newcastle legend Alan Shearer at Blackburn, fears for their chances of signing the duo after the defeat to Cambridge.

“I just wonder whether Carlos and Botman see that result today and look at the Newcastle line-up and think, ‘Really? Do I want to be going there?’

“Of course money is important but all the money in the world, do you want to get relegated and be playing in the Championship? That’s the realisation.”

The former Norwich, Blackburn, Chelsea and Celtic frontman added: “This is one of the best days in Cambridge’s history to go to Newcastle, to play in the way which they did. This wasn’t a Newcastle reserve team.

“Eddie Howe went really strong. It was one hell of a victory. To a man they were absolutely fantastic and deserved it.

“I mentioned before the game Howe when he was manager of Bournemouth made a lot of changes, wholesale changes, in the FA Cup.

“I think he was trying to build momentum with this team but it’s had the opposite effect. There’ll be questions asked – I’m not suggesting he’ll lose his job but it’s not been a great start from him whatever way you look at it.

“The Geordies are behind him but it’s one win at this moment in time. It’s alright having all the money in the world, but Eddie Howe has to get this team organised and playing better than what they are. Otherwise they’re going to go down.”

Ex-Leicester, Birmingham, Blackburn and Derby midfielder Robbie Savage added: “They can’t defend, that’s the big problem. You look at Howe’s teams in the past – they do concede a lot of goals.

“If that’s a Steve Bruce performance today, he gets absolutely hammered. Hammered.”

Newcastle have won just one Premier League match from 19 games and sit on 11 points but will hope to clinch a second win when they host Watford at St James’ Park next weekend.

The Hornets are two places above them but just only two points ahead and are without the influential Ismaila Sarr due to the Africa Cup of Nations.