There will be no full house at Wembley for the Euro 2020 semi-final or final with Government reluctant to increase the capacity beyond the current 60,000 limit due to Covid concerns

England fans face a black market battle to secure tickets for Wednesday’s semi-final with Denmark and a potential final on Sunday as the 60,000 seats available at Wembley have already sold out.

The Government are reluctant to increase the capacity beyond the 60,000 limit announced last month, despite the possibility of England reaching their first major final for 55 years.

The capacity limit has already been raised twice during the tournament, from 22,500 for England’s group games, and 45,000 for the last-16 tie between England and Germany.

The FA have been given an allocation of 9,000 by UEFA for the semi-final, with all the tickets already accounted for by the England Travel Supporters Club. 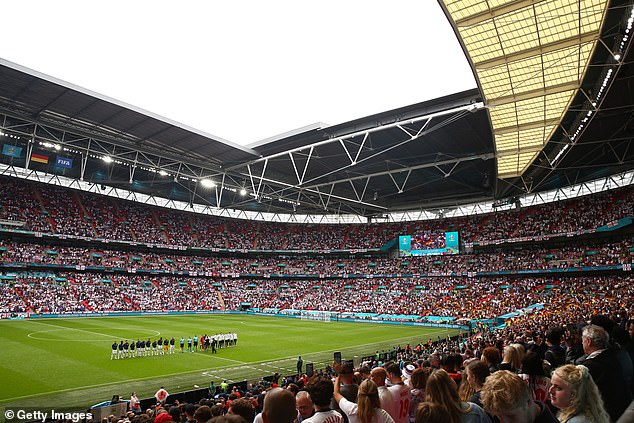 The Danish FA (DBU) have said its allocation of 5,000 tickets to the game will be sold solely to Danes living in the UK, as the country is on the amber travel list.

Anyone wishing to make the journey would have to quarantine for 10 days on arrival, meaning their deadline to fly over was last Tuesday.

The DBU have sent Denmark jerseys and flags to Danes living in England ‘so they can be well dressed for the semi-finals’.

For Tuesday’s semi-final between Italy and Spain at Wembley, both countries are also on the amber list — although the Balearic Islands are on the green watchlist.

Travellers from there could attend if they take a Covid test on or before day two after arriving, and would only have to quarantine if it is positive.