Spurs: Mourinho hits out at Solskjaer

Ole Gunnar Solskjaer’s son has now waded in on the argument between the Manchester United boss and Jose Mourinho following some fiery comments from the pair at the weekend. United walked away 3-1 winners against Tottenham on Sunday to solidify their second-place position in the table.

But there was an incident in the first half which attracted some strong comments from Solskjaer after the game.

Edinson Cavani thought he had opened the scoring for United midway through the opening 45 minutes only for his goal to be ruled out by referee Chris Kavanagh.

Replays showed that Scott McTominay had made contact with Son Heung-min’s face in the build-up to the goal.

The Tottenham star fell to the ground in agony as he held his face with Kavanagh eventually deciding to give a foul against McTominay.

JUST IN: Man Utd rank behind West Brom in list which may cause transfer issues 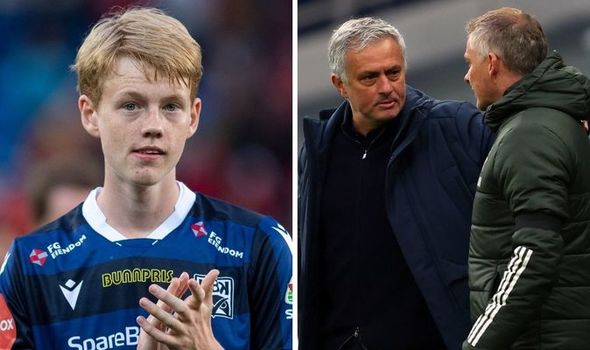 While Solskjaer was delighted to walk away with all three points, he took aim at Son in his post-match duties.

“We shouldn’t be conned. If my son stayed down for three minutes and needed 10 mates to help him up, he wouldn’t get any food,” Solskjaer said.

Mourinho though staunchly defended the South Korea international after the game, taking aim at Solskjaer in response.

“Sonny is very lucky that his father is a better person than Ole. Because as a father you have always to feed your kids, doesn’t matter what they do.

“If you have to steal to feed your kids you steal. I’m very, very disappointed.

“I have told Ole already what I think about his comments.”

Now Solskjaer’s son, Noah, has responded to the spat between the two Premier League managers.

“Yes, I laughed a lot on Sunday too,” he told local newspaper Tidens Krav. 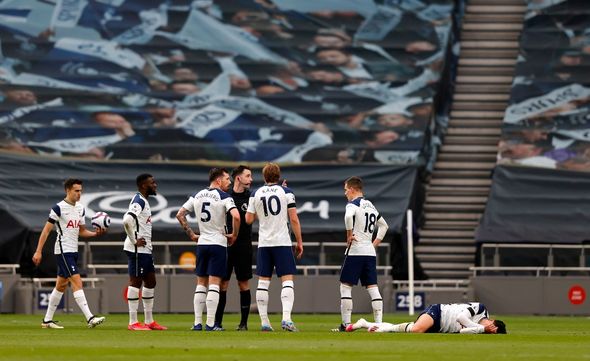 “I always get food, I can assure everyone about that.

“[Teammate] Max [Williamsen] asked me if I had been given food when he met me before training today.

“I have never been lying down the way Son did. Mourinho probably just wanted to take the focus away from the fact they had lost.”

Noah Solskjaer plays for Kristiansund BK in Norway having previously played in the academy at United.