Home » ‘One nil and you still don’t sing’: A fan’s night back at the football

“It’s football Jim, but not as we know it”. That’s what my dad John, who’s watched Crystal Palace since the early 60s and before the pandemic had never gone a year without watching a live game, said as we finally returned to Selhurst Park on Wednesday night. He’s not actually a massive Star Trek fan but there you go, lockdown has changed people.

It was always going to be emotional. Not just that it was the first time many Palace fans were allowed back for the first time in over a year but throw in Roy Hodgson’s last home game as manager after four years at the helm of his boyhood club and it meant there were few dry eyes at SE25 on Wednesday evening.

Particularly when the 73-year-old with the five-decade career in football, who hasn’t yet confirmed he is actually calling time on that career, was afforded a surprise guard of honour from his players and those of Arsenal before the final home game of the season. “That was quite emotional” said my dad as we applauded along with the 6,000 other Eagles fans inside the ground.

It was my first live game since Palace won against Brighton at the Amex in Sussex back in February 2020, which wasn’t a bad game to leave things on, but the score was the last thing on the minds of any of the fans lucky enough to get a ticket to see this dead rubber against Arsenal, as two mid-table Premier League teams battled it out.

Having just about made our allotted time thanks to the wonder that is South London traffic we were reminded what supporting Palace was like as Dad’s QR code printed out ticket didn’t work, it turned out the club had emailed him the wrong ticket. A great start and first uttering of “typical Palace” but as the friendly young steward welcomed us in with a “welcome back gents” the enormity of what was happening started to unfold.

Being back inside a football stadium suddenly felt like the first time. Way back in January 1992 was when my Dad first took me to Selhurst and some of the sights and sounds that hit me as a six-year-old did the same. The bright green of the pitch, the chatter of the crowd, the pre-game music, the Palace players blazing their practice shots into the crowd – one missed me by literally inches. It was good to be back.

To be honest, the idea of fewer people in a football stadium on match-day actually does quite appeal for someone with low-lying anxiety like me. The gangways in the Holmesdale weren’t as crowded, you had actually proper leg room and there was a shorter than normal queue for a cup of tea. I could genuinely get use to this. Especially as the noise the 6,000 made on the night didn’t sound much less than the capacity crowd of 25,000 normally make.

Thanks to Covid restrictions it meant there wasn’t a chance for the usual pre-game routine of the pub as we had an allocated time to enter the ground which left little time for a loosener at the Pawsons Arms. Which was a shame as although I would never categorically say it was the best pre-Palace pub they do have a landlord, Graham, who looks like Eagles legend Darren Ambrose in about 15 years time. I’m not sure any of the other establishments around Selhurst and Norwood can really compete with that, unless there is an Attilio Lombardo lookalike pulling pints in the Shelverdine Goathouse.

Before the players emerged Palace played a pre-recorded tribute to Hodgson on the giant screen above the Whitehorse Lane end just in case you weren’t aware it was Roy’s last game. To be fair, the fans lapped it up and already there was wiping of eyes and quivering lips.

Hodgson was then given his welcome which he looked genuinely taken by and waved to the crowd more enthusiastically than I’ve seen in hie four-year spell as manager. That continued into the game as he responded to every chant of “Hodgson, give us a wave”, the sort of thing he doesn’t normally allow himself to indulge in.

Weirdly there was no customary playing of ‘Glad All Over’ as the teams emerged, instead it was some old crooner number and I still haven’t found out if that was a mistake from the comms team or a request from Roy himself. Either way it meant the game kicked off in quite a relaxed, leisurely manner. That soon changed though. 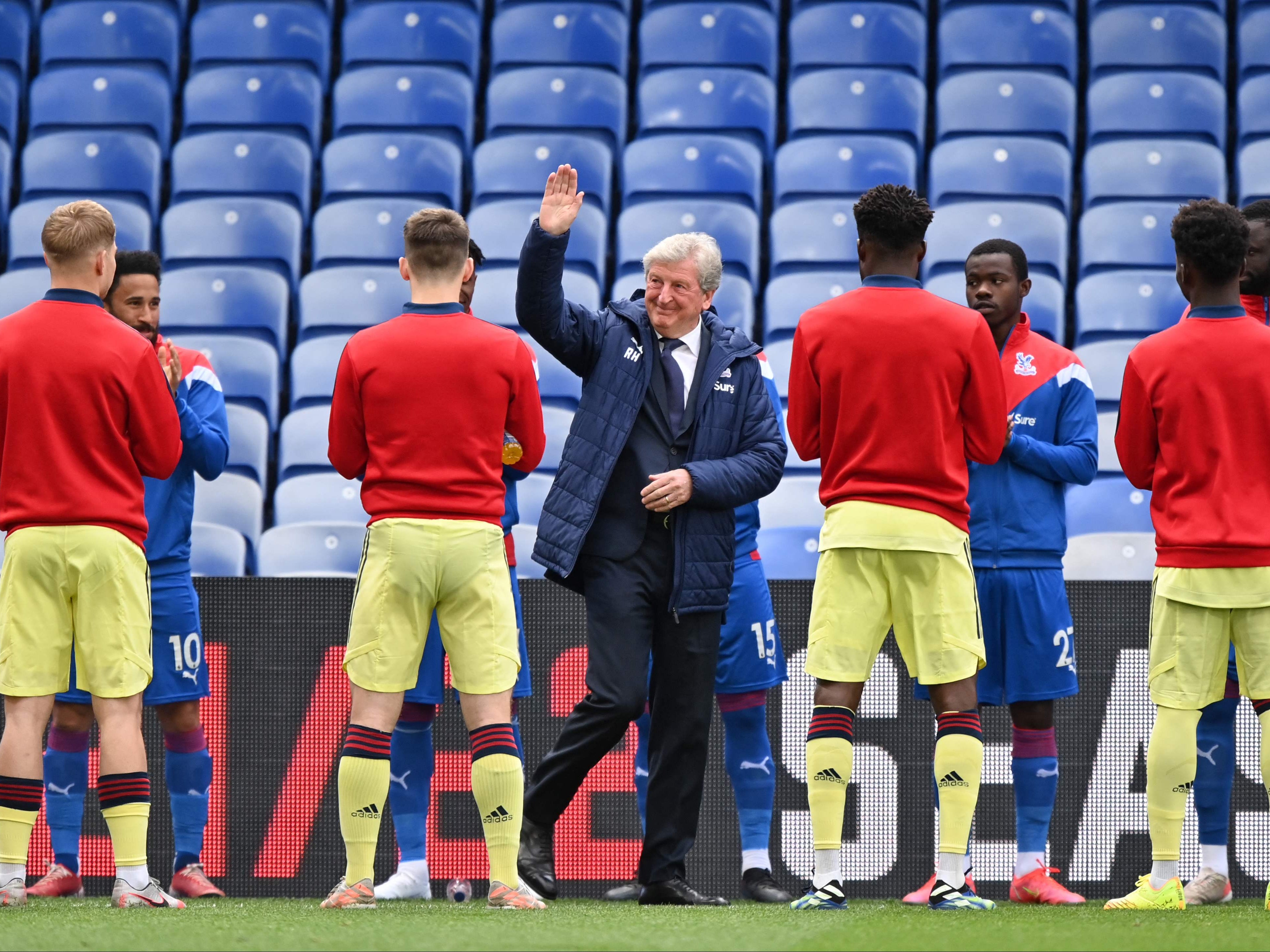 Despite being Palace’s most successful Premier League manager ever after four comfortable mid-table finishes, Roy’s position as manager has been debated long and hard over the past year or so, with those opposed to him and his style of football getting angrier and angrier and those who want him to stay getting more and more worried about what’s next. But all that gave way to a ferocious show of support for the team and the man himself on the night. Everyone, for once, pulling in the same direction.

Especially the Palace fans who seemed to have got their sense of humour back after months of watching on TV and getting annoyed on Twitter. A chant of “can you hear the Arsenal sing?” and “your support is f******* s***” sung towards an empty away end drew chuckles. But it was the action on the pitch where having fans back made a difference. Every challenge, every decision that went against Palace was met with quite frankly inappropriate levels of anger but that anger wasn’t really directed at referee Anthony Taylor or the players. It was directed at lockdown and having been banned from live football for so long. That anger, though, changed the game.

“The dynamics of the game, the ebb and flow are completely different with fans in,” said my mate Andy Street, who found a seat near us (socially distanced, mask on, of course). “It’s almost a different sport to the games played behind closed doors”. And he was right. No way would any of these fans be getting so worked up about Kieran Tierney taking too long over a throw in if they were watching at home but who cares. They were able to get irrationally angry and that was their right. Nature was healing.

After a slow start Palace got into the game and Christian Benteke looked a threat again, having rediscovered his form of late. Of course, just as Hodgson’s side were looking to open the scoring, Arsenal went down the other end and did just that, Nicholas Pepe prodding in villain of the night Tierney’s cross. Typical Palace again. The weirdest part of that was not seeing Palace concede – that’s routine this season – but the complete lack of noise as the away team scored. You are so conditioned to hear that little cheer from the away end that when it didn’t arrive (three times in total) it was very jarring.

Half-time came and went and with it so did most of my energy. I’d forgotten, after a year of being indoors, just how tiring watching a live football match was. Stewards had to start reminding fans to keep their masks on, which most duly did, and chants of “one nil and you still don’t sing” started up towards that imaginary away end again.

Benteke equalised with his fourth goal in four games and it looked like Palace would earn a point they more than deserved before the Gunners snatched it late on with two goals against the run of play; their second and third shots on target all game. The players left the pitch and then returned as Hodgson and trusty assistant Ray Lewington were rewarded with gifts from the club for their service. “There’s only one Roy Hodgson” rung around the ground as it had all game and he thanked the fans for the support over the last four years, name-checking them as reasons the club had done so well at times. After the crooner song earlier I half expected him to belt out Frank Sinatra’s ‘My Way’ just to really stick it to Palace Twitter but of course it was a classic Hodgson speech; honest, eloquent and professional. Just like him.

“There’s so many things you can say about Roy Hodgson” said my mate Rob Sutherland through dewy-eyes, “but it won’t touch upon all the great things he’s done for Palace over the last four years. It’s not always been the most entertaining but I wish him the best and I send him all my love.”

It was certainly Hodgson who was feeling the love on Wednesday night at Selhurst and Palace fans who were loving being back. Roll on next season.