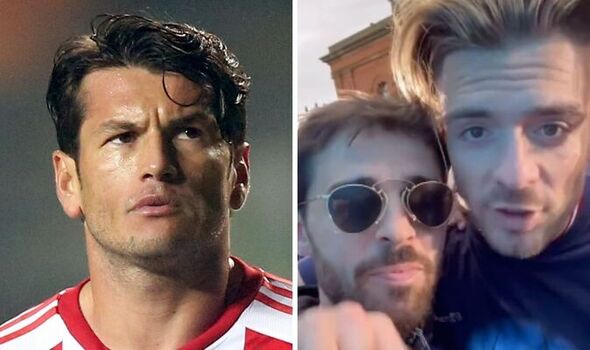 Paraguay legend Nelson Valdez, who played under Jurgen Klopp at Borussia Dortmund, has jumped to the defence of his compatriot Miguel Almiron by savaging Jack Grealish over the comments he made about the Newcastle man during Manchester City’s Premier League title party. During an Instagram video with Bernardo Silva, the £100million man appeared to mock his team-mate Riyad Mahrez’s performance against Aston Villa, by claiming he “played like Almiron.”

The comments, which many feel have crossed the line, have made the front pages of sports newspapers in Almiron’s homeland in South America, sparking additional further on social media.

Now Valdez, who played for his country at the 2006 and 2010 World Cups, has called out Grealish over what he considers a dismal season following his British-record transfer to the Etihad Stadium last summer.

The 38-year-old wrote on Instagram: “A player who costs more than £100m and is set on the bench, it is better to remain silent than talk s*** about Miguel Almiron.”

On yet another unforgettable afternoon of final day drama, Pep Guardiola’s side came from 2-0 down in the second half to beat Villa to pip Liverpool to their sixth Premier League title.

Grealish was forced to watch on nervously through his fingers from the bench against his former side and when asked by Bernardo what the secrets were behind the win during Monday’s celebrations, the seemingly-drunk England international certainly didn’t hold back.

He said: “Riyad [Mahrez]: take him off as soon as possible… he played like [Miguel] Almiron.

“Number two, he’s been so good this season [Bernardo] but get him off the pitch. Off!”

Grealish was one of the main attractions as City’s stars celebrated their triumph and the former Villa man was keen to lap up the party mood.

Before adding: “Enjoy it Jack, enjoy it, why not. Fantastic well done.”

The attacker was sporting a gravelly voice on Monday following a heavy night before City’s parade as celebrations continued long into the night.

After chanting songs and swigging beer on the bus, Grealish arrived on stage at City’s party with another bottle of beer and a Jagerbomb.

Yet come Tuesday morning, Grealish had already flown to Ibiza as he was snapped alongside Wayne Lineker at his popular day club, Ocean Beach.

The 26-year-old is set to link up with his team-mates at St George’s Park next week, once he has finished celebrating City’s crowning moment.