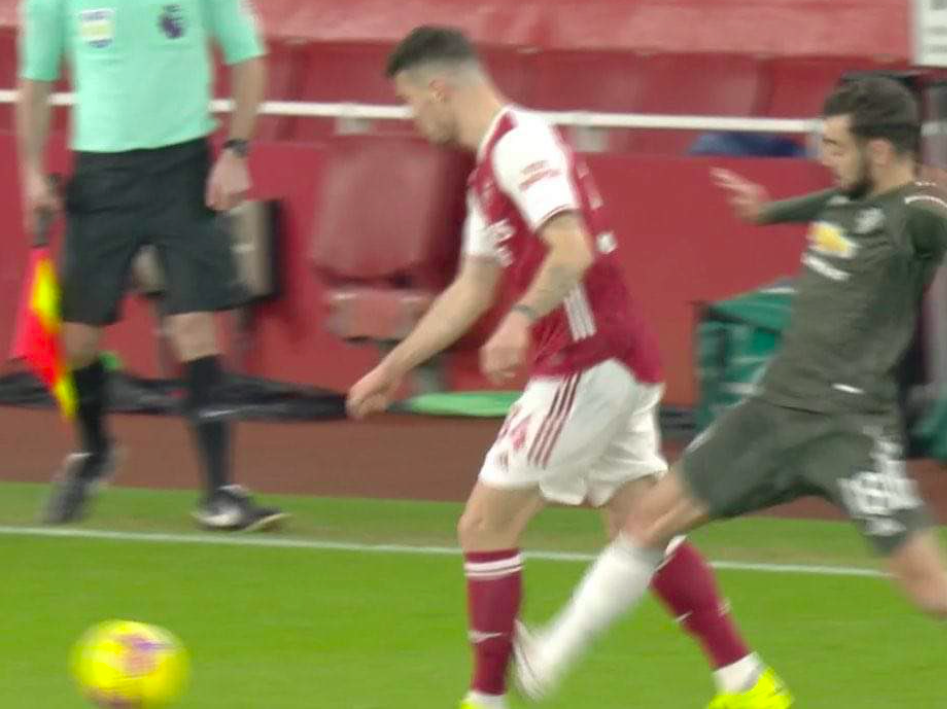 Paul Scholes has criticised Bruno Fernandes for his tackle on Granit Xhaka in the first half of Manchester United’s clash with Arsenal and says the midfielder was ‘lucky’ to escape punishment.

Fernandes was typically at the heart of the action in the opening 45 minutes at the Emirates and had a penalty shout turned down before being on the receiving end of a clumsy challenge from Cedric Soares, who caught him in the face with a flailing arm.

Referee Michael Oliver showed Soares a yellow card but Fernandes appeared frustrated as play continued and seemed to take out his anger on Xhaka with a rake down his unsuspecting opponent’s ankle from behind.

The incident was checked by the video assistant referee but Fernandes got away without even being booked, a decision which shocked former United star Scholes.

‘I’ve been in this position a few times myself!’ Scholes told Premier League Productions at the half-time break.

‘He’s not happy with the stray arm from Cedric, he’s snapped obviously, something goes, that red mist goes comes over and you’re thinking, “Someone else is getting it”, and Xhaha got it.

‘I think it’s a little bit lucky, he doesn’t even get a yellow card, it’s late. It’s right down the back of his calf, it’s a nasty one really and he’s lucky to get away with it.’

Ex-United and England midfielder Owen Hargreaves was similarly surprised to see Fernandes escape without even a booking and said red cards had been brandished for much less in the Premier League.

‘I think the one thing everybody likes is when the ref is still reffing the game and he goes over to the monitor and looks himself,’ Hargreaves said.

‘I think we’ve seen reds given for less. But maybe in these big games sometimes refs are reluctant maybe if it’s not clear cut.

‘But if he goes to look at the monitor it’s at least a  yellow card.’